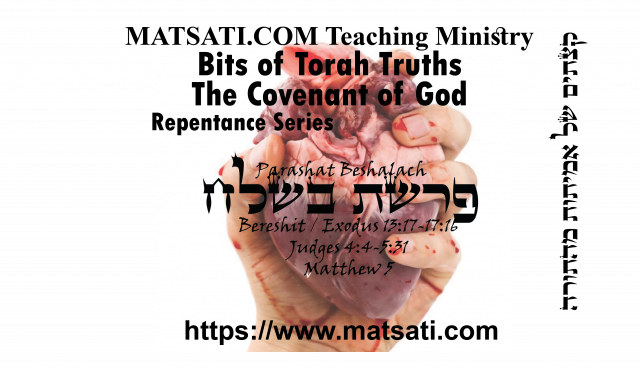 In this week’s Torah portion we read the following, 1 וַיְדַבֵּ֥ר יְהֹוָ֖ה אֶל־מֹשֶׁ֥ה לֵּאמֹֽר׃ The LORD said to Moses: 2 דַּבֵּר֮ אֶל־בְּנֵ֣י יִשְׂרָאֵל֒ וְיָשֻׁ֗בוּ וְיַחֲנוּ֙ לִפְנֵי֙ פִּ֣י הַחִירֹ֔ת בֵּ֥ין מִגְדֹּ֖ל וּבֵ֣ין הַיָּ֑ם לִפְנֵי֙ בַּ֣עַל צְפֹ֔ן נִכְח֥וֹ תַחֲנ֖וּ עַל־הַיָּֽם׃ Tell the Israelites to turn back and encamp before Pi-hahiroth, between Migdol and the sea, before Baal-zephon; you shall encamp facing it, by the sea. 3 וְאָמַ֤ר פַּרְעֹה֙ לִבְנֵ֣י יִשְׂרָאֵ֔ל נְבֻכִ֥ים הֵ֖ם בָּאָ֑רֶץ סָגַ֥ר עֲלֵיהֶ֖ם הַמִּדְבָּֽר׃ Pharaoh will say of the Israelites, “They are astray in the land; the wilderness has closed in on them.” 4 וְחִזַּקְתִּ֣י אֶת־לֵב־פַּרְעֹה֮ וְרָדַ֣ף אַחֲרֵיהֶם֒ וְאִכָּבְדָ֤ה בְּפַרְעֹה֙ וּבְכָל־חֵיל֔וֹ וְיָדְע֥וּ מִצְרַ֖יִם כִּֽי־אֲנִ֣י יְהוָ֑ה וַיַּֽעֲשׂוּ־כֵֽן׃ Then I will stiffen Pharaoh’s heart and he will pursue them, that I may gain glory through Pharaoh and all his host; and the Egyptians shall know that I am the LORD. And they did so. 5 וַיֻּגַּד֙ לְמֶ֣לֶךְ מִצְרַ֔יִם כִּ֥י בָרַ֖ח הָעָ֑ם וַ֠יֵּהָפֵךְ לְבַ֨ב פַּרְעֹ֤ה וַעֲבָדָיו֙ אֶל־הָעָ֔ם וַיֹּֽאמרוּ֙ מַה־זֹּ֣את עָשִׂ֔ינוּ כִּֽי־שִׁלַּ֥חְנוּ אֶת־יִשְׂרָאֵ֖ל מֵעָבְדֵֽנוּ׃ When the king of Egypt was told that the people had fled, Pharaoh and his courtiers had a change of heart about the people and said, “What is this we have done, releasing Israel from our service?” We are told the Lord directs Israel to turn back and encamp before Pi-hahiroth facing the sea. The Lord states specifically in the text that this was for the purpose of hardening Pharaoh’s heart, he would become prideful to observe how Israel did not appear to know what she was doing wandering around. Pharaoh’s pride was accompanied with thoughts of incompetence, superiority, and that the people were dumb. Have you ever thought in this way towards others? If so there is a hardening in part of the heart of the one who does this. In the Torah, pride accomplished the process of hardening, and Pharaoh’s servants also had a change of heart. Why did they have a change of heart? Was it because they thought Israel have decided to turn back to the ways of sin by not leaving this region completely? Rashi on Shemot / Exodus 14:2 part 2 states that this place they were to turn towards had two different names. The reason why the Torah refers to this place by a different name was so Israel could encounter a city with free men. The idea was if they made it as far as Pi-hahiroth they would have gained their freedom. The rabbinic interpretation is Israel was trying to find the shortest route to freedom. As we can see in the narrative, the shortest route is not always the best way possible. The Lord God preforms a miracle on behalf of Israel to deliver her from bondage and sin by doing the impossible, dividing the Red Sea. It is in a similar way we are to look for our deliverance, in an astonishing way the Lord will also deliver us from bondage and sin. The Lord promised us in His Messiah we would be given freedom, just as the people were promised freedom by the hand of Moshe. Rashi also states “the words לִפְנֵי֙ פִּ֣י הַחִירֹ֔ת, (lifney pi hakhirot) meant the reason why the Torah mentions that location is to mislead Pharaoh into thinking that the Israelites had gotten lost, as a result of which they had second thoughts about leaving Egypt, and the proof is that they encamped at that location, one familiar to them as they had built the fortifications in that town, it being known to them as Pittom.” The commentary speaks of taking three day journey, and parallels this to having second thoughts, turning back to the ways of sin, to Egypt, to bondage, or having some reservations of completely leaving their former lives. One of God’s purposes for giving us His Word is to provide assurance of His salvation. The Apostle John wrote: “This is the record, that God hath given to us eternal life, and this life is in his Son. He that hath the Son hath life: and he that hath not the Son of God hath not life. These things have I written unto you that believe on the name of the Son of God; that ye may know that ye have eternal life, and that ye may believe on the name of the Son of God” (1 John 5:11-13 and see also John 3:15-17). When we consider the Torah portion for this week, all of the events that take place reveal to us how we are to be careful to properly understand God’s graces, which are meant for our repentance and trusting in Him. We are given God’s Torah in order to properly define sin. A false definition of sin will lead a person astray, and in a similar way, wrongly defining God’s graces (mercies) will also lead one astray. We have to trust in God’s Word and His promises. The evidence of His mercy in our lives draw us to praise His name, increases our faith, and leads us to repentance, turning from sin to His holy and righteous ways. In the Mishnah Pirkei Avot 6:7 the rabbis say there is life in God’s Torah, that one finds healing, is happy, and finds grace in the commands of God. Mercy is found in the Torah, the reason being, the Lord provides for us the way of Teshuvah (repentance) and what it means to turn from sin. The proverbs are given as the rabbinic explanation for the benefit of the Torah, one finds length of days, an addition of years, wealth and honor, and a life that is filled with peace. Does this sound like the typical definition of the Law of God today? The Torah is described as a way of life for God’s people and the road upon which we are to set our feet upon. The reason being, the Torah speaks of the faithfulness of God to those who trust in Him.

Bits of Torah Truths, Parashat Pekudei, Do you believe we are...