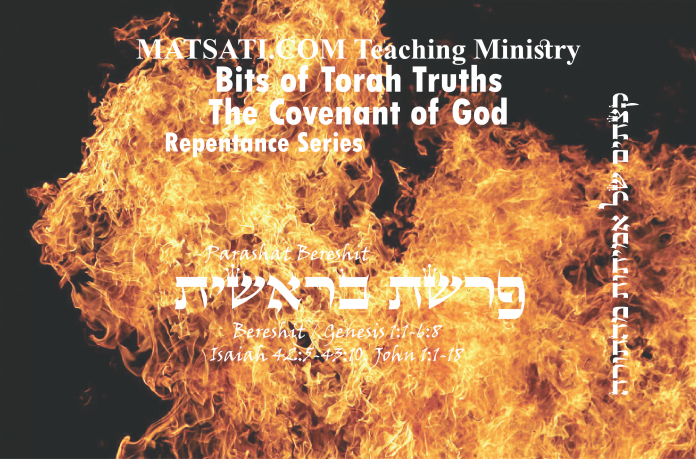 In this week’s Torah Portion, Parashat Bereshit, we read the following, יא וַיֹּאמֶר אֱלֹהִים תַּדְשֵׁא הָאָרֶץ דֶּשֶׁא עֵשֶֹב מַזְרִיעַ זֶרַע עֵץ פְּרִי עֹשֶֹה פְּרִי לְמִינוֹ אֲשֶׁר זַרְעוֹ-בוֹ עַל-הָאָרֶץ וַיְהִי-כֵן: יב וַתּוֹצֵא הָאָרֶץ דֶּשֶׁא עֵשֶֹב מַזְרִיעַ זֶרַע לְמִינֵהוּ וְעֵץ עֹשֶֹה-פְּרִי אֲשֶׁר זַרְעוֹ-בוֹ לְמִינֵהוּ וַיַּרְא אֱלֹהִים כִּי-טוֹב: יג וַיְהִי-עֶרֶב וַיְהִי-בֹקֶר יוֹם שְׁלִישִׁי: 1:11 Then God said, ‘Let the earth sprout vegetation: plants yielding seed, and fruit trees on the earth bearing fruit after their kind with seed in them’; and it was so. 1:12 The earth brought forth vegetation, plants yielding seed after their kind, and trees bearing fruit with seed in them, after their kind; and God saw that it was good. 1:13 There was evening and there was morning, a third day. (NASB) The creative acts the Lord performs on the third day of creation, speak to us today if we are willing to see, hear, and listen to what the Lord has to say. The commentary Chizkuni on Bereshit / Genesis 1:12 Part 1, states “וְעֵץ עֹשֶֹה-פְּרִי, and fruit bearing trees. If you were to argue that there are many trees that do not bear fruit, the answer is that what the Torah really meant was that the fruit that the trees mentioned, were to be fruit matching its species…” The significance of this rabbinic commentary is how the fruit being produced upon the trees were to match its species. These words speak of a distinction between the righteous and the unrighteous. The fruit of the righteous is love, joy, peace, forbearance, kindness, goodness, faithfulness, gentleness and self-control. The fruit of the unrighteous expresses itself in sexual immorality, impurity and indecency; involvement with the occult and with drugs; in feuding, fighting, becoming jealous and getting angry; in selfish ambition, factionalism, intrigue and envy; in drunkenness, orgies and things like these. Paul wrote to the Galatians saying 5:21 “… I warn you now as I have warned you before: those who do such things will have no share in the Kingdom of God!” The Torah is about producing good fruit, the instructions of God for His people in righteousness and truth. When we consider modern theologies that stand against God’s Torah, what kind of fruit does it produce? Read more here:  BTT_Parashat-Bereshit-2017

Why does light leave the position from which it is created?...

Each of us must be cleansed from Tzaraat (Leprosy), פרשת תזריע,...

Do Molecular Simulations Represent the Real World at the Atomic Scale?...