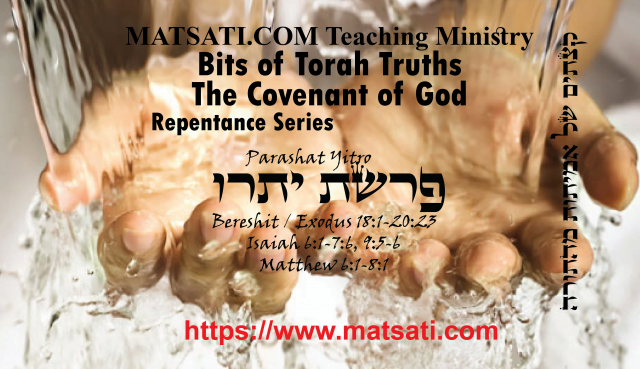 The opening verses in this week’s Torah portion state the following, וַיִּשְׁמַ֞ע יִתְר֨וֹ כֹהֵ֤ן מִדְיָן֙ חֹתֵ֣ן מֹשֶׁ֔ה אֵת֩ כָּל־אֲשֶׁ֨ר עָשָׂ֤ה אֱלֹהִים֙ לְמֹשֶׁ֔ה וּלְיִשְׂרָאֵ֖ל עַמּ֑וֹ כִּֽי־הוֹצִ֧יא יְהוָ֛ה אֶת־יִשְׂרָאֵ֖ל מִמִּצְרָֽיִם׃ 18:1 Jethro priest of Midian, Moses’ father-in-law, heard all that God had done for Moses and for Israel His people, how the LORD had brought Israel out from Egypt. וַיִּקַּ֗ח יִתְרוֹ֙ חֹתֵ֣ן מֹשֶׁ֔ה אֶת־צִפֹּרָ֖ה אֵ֣שֶׁת מֹשֶׁ֑ה אַחַ֖ר שִׁלּוּחֶֽיהָ׃ 18:2 So Jethro, Moses’ father-in-law, took Zipporah, Moses’ wife, after she had been sent home, וְאֵ֖ת שְׁנֵ֣י בָנֶ֑יהָ אֲשֶׁ֨ר שֵׁ֤ם הָֽאֶחָד֙ גֵּֽרְשֹׁ֔ם כִּ֣י אָמַ֔ר גֵּ֣ר הָיִ֔יתִי בְּאֶ֖רֶץ נָכְרִיָּֽה׃ 18:3 and her two sons—of whom one was named Gershom, that is to say, “I have been a stranger in a foreign land”; וְשֵׁ֥ם הָאֶחָ֖ד אֱלִיעֶ֑זֶר כִּֽי־אֱלֹהֵ֤י אָבִי֙ בְּעֶזְרִ֔י וַיַּצִּלֵ֖נִי מֵחֶ֥רֶב פַּרְעֹֽה׃ 18:4 and the other was named Eliezer, meaning, “The God of my father was my help, and He delivered me from the sword of Pharaoh.” וַיָּבֹ֞א יִתְר֨וֹ חֹתֵ֥ן מֹשֶׁ֛ה וּבָנָ֥יו וְאִשְׁתּ֖וֹ אֶל־מֹשֶׁ֑ה אֶל־הַמִּדְבָּ֗ר אֲשֶׁר־ה֛וּא חֹנֶ֥ה שָׁ֖ם הַ֥ר הָאֱלֹהִֽים׃ 18:5 Jethro, Moses’ father-in-law, brought Moses’ sons and wife to him in the wilderness, where he was encamped at the mountain of God. We are told that Yitro heard all that God had done for Moshe for Israel His people and how the Lord had brought Israel out of Egypt. If we consider what we are told when Moshe went to Yitro telling him that he was returning to Egypt, Yitro told him to go. Then we are told that Moshe loaded up his wife and children and went to Egypt. The narrative does not say Yitro went with him. Considering the location of Midean which is near modern day Iran, this location being across the Arabian peninsula is quite a long distance from Egypt and yet Yitro heard all that had taken place in Egypt. Rashi on Shemot / Exodus 18:1 Part 1 asks the question “What was the particular report which he heard so that he came? The division of the Red Sea and the war with Amalek (cf. (Mekhilta d’Rabbi Yishmael 18:1:1; Zevachim 116a).” Rashi’s conclusion is that he had heard how the Lord had delivered Israel through the Red Sea and over come Amalek in war. Now we are told that Moshe had sent his wife and children back to Midean. Yitro may have heard of all the Lord had done from his daughter Zipporah but not the parting of the Red Sea and the war with Amalek because these had not taken place when she had returned to her father. The rabbis question how Yitro heard of these things, and conclude based upon 1 Samuel 15:6 that Yitro was a Kenite and was spared destruction when Israel wiped out the Amalekites, one person possibly escaped and told Yitro. This caused Yitro to make the journey to see Moshe and Israel at Sinai. The commentary Rabbeinu Bahya, Shemot / Exodus 18:1 Part 5 states the following:

Rabbeinu Bahya, Shemot / Exodus 18:1 Part 5
The reason that the portion of Yitro which contains the account of the giving of the Torah also follows the story of the fight against Amalek and Yitro’s conversion, is that the report of the giving of the Torah is a reminder that eventually the Torah will become the property of all of mankind and G’d’s name and knowledge of Him will be world-wide “like the waters which cover the ocean” (Isaiah 11,9). Following that redemption there will be a יום הדין, a “day of judgment,” a resurrection of the dead. This is why the portion ואלה המשפטים follows the giving of the Torah to signal to us that resurrection and eternal life will be for those who observe the commandments spelled out in that portion. It is worth noting that when Daniel 12,2 refers to that day in the future he mentions the word אלה twice in that verse. The proximity of our portions is to be understood in terms of Isaiah 46,10 מגיד מראשית אחרית “who foretells at the beginning what the end is going to be like.” By commencing פרשת משפטים with the word ואלה, the link between Torah legislation, observance and resurrection as mentioned in Daniel is established.

Note how according to this commentary, the Torah portion is connected to the resurrection and the obedience to the commandments. This is consistent with what we read in the Apostolic Writings in the book of Revelation 19 (see also Jeremiah 31), Galatians 5, Romans 3:31, 7, 15, and 16, etc. Note how the rabbinic commentary mentions “the story of the fight against Amalek and Yitro’s conversion, is that the report of the giving of the Torah is a reminder that eventually the Torah will become the property of all of mankind and G’d’s name and knowledge of Him will be world-wide.” (see Isaiah 1 and 2) The point of Yitro hearing the report of Moshe, Israel, and the Lord God in heaven was to bring the Torah of God to all the earth. It is interesting how the fame of the God of Israel and Moshe had gone out into all the world, so much so, even Midean which was a considerable distance away (across the Arabian peninsula) heard of the power and might of our God. In a similar manner, the Apostle Paul wrote to the romans saying that their fame had also gone out into all the world.

Romans 1:1-15
1:1 Paul, a bond-servant of Christ Jesus, called as an apostle, set apart for the gospel of God, 1:2 which He promised beforehand through His prophets in the holy Scriptures, 1:3 concerning His Son, who was born of a descendant of David according to the flesh, 1:4 who was declared the Son of God with power by the resurrection from the dead, according to the Spirit of holiness, Jesus Christ our Lord, 1:5 through whom we have received grace and apostleship to bring about the obedience of faith among all the Gentiles for His name’s sake, 1:6 among whom you also are the called of Jesus Christ; 1:7 to all who are beloved of God in Rome, called as saints: Grace to you and peace from God our Father and the Lord Jesus Christ. 1:8 First, I thank my God through Jesus Christ for you all, because your faith is being proclaimed throughout the whole world. 1:9 For God, whom I serve in my spirit in the preaching of the gospel of His Son, is my witness as to how unceasingly I make mention of you, 1:10 always in my prayers making request, if perhaps now at last by the will of God I may succeed in coming to you. 1:11 For I long to see you so that I may impart some spiritual gift to you, that you may be established; 1:12 that is, that I may be encouraged together with you while among you, each of us by the other’s faith, both yours and mine. 1:13 I do not want you to be unaware, brethren, that often I have planned to come to you (and have been prevented so far) so that I may obtain some fruit among you also, even as among the rest of the Gentiles. 1:14 I am under obligation both to Greeks and to barbarians, both to the wise and to the foolish. 1:15 So, for my part, I am eager to preach the gospel to you also who are in Rome. (NASB)

Note how the fame of the righteous works of the Romans had gone out into all the world. Paul speaks of the obedience of the faith (1:5) and thanks God because of their faith in the Messiah that was demonstrated by their faithfulness which has been proclaimed throughout the whole world (1:8). Paul speaks of their faith in Yeshua the Messiah (Christ) and then of his desire to come to Rome and preach the gospel message to them. Having heard of Yeshua and placing their faith in Him, what is the gospel message Paul is referring to having such a great desire to preach to them if they have already heard and believed in Yeshua? Could this be what the rabbinic commentary is relating to on the importance of the Torah for our lives when the rabbis say: “This is why the portion ואלה המשפטים follows the giving of the Torah to signal to us that resurrection and eternal life will be for those who observe the commandments spelled out in that portion. It is worth noting that when Daniel 12,2 refers to that day in the future he mentions the word אלה twice in that verse. The proximity of our portions is to be understood in terms of Isaiah 46,10 מגיד מראשית אחרית “who foretells at the beginning what the end is going to be like.” By commencing פרשת משפטים with the word ואלה, the link between Torah legislation, observance and resurrection as mentioned in Daniel is established.” The rabbis speak of a link between the Torah, obedience to the commands, and the resurrection. These things are connected because the mitzvot (commandments) are part of the sanctification process, of setting us apart as holy unto God for His glory and to bear His testimonies.