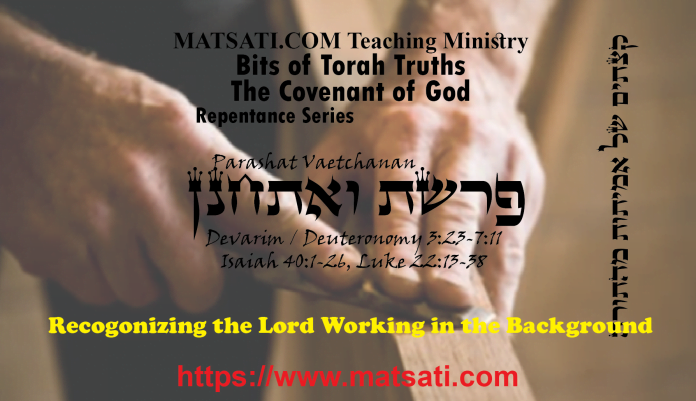 In this week’s Torah portion we read the following:..

Moshe speaks to the people, he describes how he had commanded (צִוֵּ֔יתִי) Joshua in regards to what he should do on taking the people into the Promised Land concerning God’s Word.  He tells the people they have seen with their own eyes all the Lord their God has done to these two kings.  What is interesting is how it was the men of Israel who went on to conquer these two kings.  Miracles as we know them (def. “a surprising and welcome event that is not explicable by natural or scientific laws and is therefore considered to be the work of a divine agency.”) was not visibly apparent as was seen previously (40 years ago) when the Lord delivered His people from Egypt, the Land of bondage and sin.  He then tells them, 3:21 Do not fear them, for it is the LORD your God who will battle for you.”  Though there was no explicit miracle, Moshe is acting as if there was a miracle that had occurred as the people were successful in battle against these two kings.  Their success was attributed to God’s blessing upon them though they did this themselves.  The rabbinic commentaries explain this in the following way:

Or HaChaim on Deuteronomy 3:21:2
The reason Moses preferred to record these instructions here instead of after the conquest of the lands of Sichon and Og and the settlement of the tribes of Reuven and Gad in those lands, is because the conditions which were attached to the settlement of these lands by these tribes, etc. This could have created the impression that Joshua required the assistance of the heroic men of those tribes before he would undertake the mission of conquering the land of Canaan. Seeing that it was G’d who would conduct the actual battles, Moses did not want a false impression to be created. He introduced the paragraph with the words ואת יהושוע, “and Joshua,” to hint that Joshua’s part was incidental, as suggested by the conjunctive letter ו. This is also why Moses concluded this paragraph with the words “for your G’d will fight on your behalf.” Moses underlined the word הוא, “He Himself,” to make it even less plausible for someone who had heard that the men of the tribes of Gad and Reuven had to cross the Jordan in full Armour to conclude that this was an indication that the wars of conquest would be dangerous. I have already explained the purpose of that command in my commentary on Parshat Mattot. You may also wish to read my comments on the words את כל.

The rabbis speak of why Moshe needed to say these things to the people, because “the conditions which were attached to the settlement of these lands by these tribes, this could have created the impression that Joshua required the assistance of the heroic men of those tribes before he would undertake the mission of conquering the land of Canaan.”  The point was to not give the impression that God was not involved, here we have the example how the Lord God Almighty was working in the background.  Though the heroic men of Israel were involved in the battle, the  one who actually conducted the battle was the Lord.  This is why he tells them, 3:21 Do not fear them, for it is the LORD your God who will battle for you.”  The Lord gives these men the ability to battle, the protection from the arrows of the enemy, and works in the hearts of the enemy to fear their opponents and fail in their attempt to overcome God’s people.  This has great application for us today to know the Lord is fighting the battle on our behalf, in the background, we have no idea exactly what all the Lord is doing to keep us safe. The biblical examples of this have the Lord acting as the craftsman or potter who is working, transforming, and making us into the men and women He wants us to be.

The book of Habakkuk provides for us a conversation between the prophet and God (see Habakkuk 1-2).  The prophet Habakkuk was distressed over God’s actions in the world.  He wanted to see the miraculous, he wanted God to bring swift justice against the wicked, the unrighteous, and the nations who were devising evil plans against God’s people.  As he stood in Jerusalem, he pondered the state of the nation, Judah was wroth with idolatry, they were not walking in God’s ways, there were not faithful to the covenant, and the Lord was silent.  The book of Habakkuk offers us a picture of a people filled with pride who rejected humility.  The righteous however were to live by their faith (Habakkuk 2:4) and this parallels the charge Moshe had given to Joshua, to remain faithful to the Lord by keeping his Khukim (statutes), Mishpatim (judgments) and Mitzvot (commandments).  For a faithful people, the Lord God will fight on their behalf!  Habakkuk encourages God’s people to wait upon the Lord and to expect great things, that He will work out all things for good (Romans 8:28).  The difference is found in those who remain faithful as compared to those who do not.  Habakkuk had the difficulty of being forced to look upon evil, to stare at the face of trouble day by day.  This is exactly what we are seeing today the spread of evil throughout this world, on television, in our culture, and even to our neighborhoods and local communities.  We have all seen evidence of evil in our lives, and we have all been touched by it.  We bear the scars of the evil that is in this world and each of us are at various stages of healing.  We are surrounded by evil, trapped in a sense, that may or may not be a function of our own making.  We are often downtrodden by the bad choices we have made in life in this fallen world.  The book of Habakkuk reminds us that no place is too dark and no wall too thick for God’s mercy to work in a powerful and life changing way.  This is what this week’s Torah portion is speaking to us about, just as Moshe told the people Devarim / Deuteronomy לֹ֖א תְִּירָא֑וּם כִּ֚י יְהוָ֣ה אֱלֹֽהֵיכֶ֔ם ה֖וּא הַנִּלְחָ֥ם לָכֶֽם׃ (ס)3:21 Do not fear them, for it is the LORD your God who will battle for you.”  This promise of the Lord’s protection and battling for us comes by faith and faithfulness in God our Father in heaven and in His Messiah Yeshua.  As Moshe encouraged the people and Joshua to remain faithful, we too are given this exhortation to remain faithful because the Lord has great things in store for us!

Electrical energy can be captured as liquid air – A Spiritual...

Does God need to be Reminded?