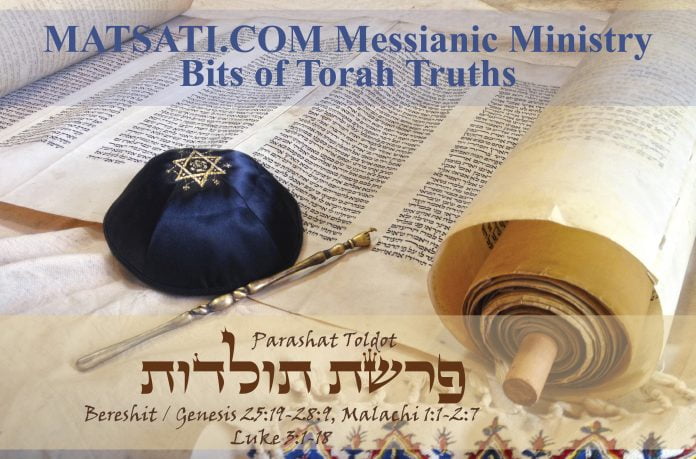 In this week’s reading from Parashat Toldot (Shemot / Genesis 25:19-28:9) we read about the struggle between Jacob and Esau within Rebecca’s womb (25:21-23).  We learn that Esau became a skilled hunter and Jacob dwelled in tents (25:27-28).  According to the narrative, Esau despised his birthright.  This is taken from the text that states he sold his birthright for a bowl of soup (25:29-34).  The Torah portion continues to describe Isaac’s interaction with Abimelech (26:26-31).  According to the Scriptures, Jacob stole the birthright with a bowl of soup, he also stole the blessing from Isaac (27:1-41).  The portion concludes with Jacob fleeing to Haran (27:42-28:9) out of fear for his life from his brother.  This week’s reading contains a number of significant events in the life of both Jacob and Esau that are referenced throughout the history of Israel and all of Scripture.

The Scriptures tell us that both Jacob and Esau struggled within Rebecca and she inquired of the Lord and He said, 25:23 …‘Two nations are in your womb; And two peoples will be separated from your body; And one people shall be stronger than the other; And the older shall serve the younger.’ (NASB)  According to the Scriptures, it becomes apparent that this struggle is related to the one who walks by faith and the other who despises God’s ways.

Bereshit / Genesis 25:21-24
25:21 Isaac prayed to the Lord on behalf of his wife, because she was barren; and the Lord answered him and Rebekah his wife conceived. 25:22 But the children struggled together within her; and she said, ‘If it is so, why then am I this way?  So she went to inquire of the Lord. 25:23 The Lord said to her, ‘Two nations are in your womb; And two peoples will be separated from your body; And one people shall be stronger than the other; And the older shall serve the younger.’ 25:24 When her days to be delivered were fulfilled, behold, there were twins in her womb. (NASB)

Thinking on the topic of the one who walks by faith verses the one who despises God’s ways, reading through the opening verses to the Parashah, an interesting midrash may be derived using the rabbinic style on interpreting the differences between Jacob and Esau according to Bereshit / Genesis 25:27, כז   וַיִּגְדְּלוּ הַנְּעָרִים וַיְהִי עֵשָֹו אִישׁ יֹדֵעַ צַיִד אִישׁ שָֹדֶה וְיַעֲקֹב אִישׁ תָּם ישֵׁב אֹהָלִים:  25:27 When the boys grew up, Esau became a skillful hunter, a man of the field, but Jacob was a peaceful man, living in tents. (NASB)  In the opening verses, we are told something about these two boys, Jacob and Esau.  The Scriptures say that Esau loved to hunt, that he was a skilled hunter and a man of the field.  On the other hand, Jacob was a peaceful man who lived in tents.  Immediately, there is an interesting contrast being made, suggesting that one who hunts is not a peaceful man.  On the other hand, the one who dwells in tents is full of peace.  The concept being established here might be that the one who likes to go out into the field likes to be alone.  Whereas, the one who dwells in tents must be capable of dwelling with others being a peace maker as compared to the type of person who prefers to be alone.  While reading through the Hebrew text, I noticed something quite interesting, it is possible to interpret Bereshit / Genesis 25:27 in a way that is very midrashic. This week, let’s try to understand this verse (Bereshit / Genesis 25:27) from a midrashic sense by breaking down this verse into two sections as shown below.

In the midrashim, the rabbis use various methods of exegesis for interpreting the Scriptures.  The following seven examples are taken from the seven middot attributed to R. Hillel and cataloged in Tos. Sanhedrin 7.11 (see http://jewishencyclopedia.com/articles/10801-middot-the-seven-of-hillel).

These principles of exegesis employed in the rabbinic literature and in the first century are widely divergent from those used by modern scholars today.  The method of interpretation for this weeks reading is taken from the Gezerah shavah looking at the text from Bereshit / Genesis 25:27, כז   וַיִּגְדְּלוּ הַנְּעָרִים וַיְהִי עֵשָֹו אִישׁ יֹדֵעַ צַיִד אִישׁ שָֹדֶה וְיַעֲקֹב אִישׁ תָּם ישֵׁב אֹהָלִים:  25:27 When the boys grew up, Esau became a skillful hunter, a man of the field, but Jacob was a peaceful man, living in tents. (NASB)  The idea is to link together the meaning of the text on the grounds of the verbal similarity of two words found in this verse from the Torah.  This is something we see being applied all of the time in the midrashim.  I would like to compare both Esau and Jacob, to two words, based on the description of Esau being a man of the field, and Jacob, the one who dwells in tents.  Taking the words שָֹדֶה (field) and אֹהָלִים (tents), if we make the following letter changes, by exchanging the “Sin” (שֹ) with “Shin” (שׁ) and switching the order of the heh-lamed (הל) to lamed-heh (לה) we get the following:

Notice how the word שָֹדֶה (field) becomes ַשֵּׁד (demon) and אֹהָלִים (tents) becomes אֱלֹהִים (God).  (A Torah example of the word for demons (plural form) is found in Devarim / Deuteronomy 32:18 (לַשֵּׁדִים) 32:17 ‘They sacrificed to demons who were not God, To gods whom they have not known, New gods who came lately, Whom your fathers did not dread. NASB)  If we take this approach, exchanging the letters in this way, we find that Esau was a man of demons, and Jacob, dwelled with God.  Reading through Midrash Rabbah on this week’s Torah portion, the rabbis do not draw conclusions on Jacob and Esau in this particular method of exegesis.  However, studying both the Bible and the rabbinic literature, we find that the same conclusion is drawn regarding Esau being a man who loved idols which correspond to demons, and Jacob a man who loved God.

The Aramaic Targum has the following to say regarding these opening verses in the Portion for this week:

Bereshit / Genesis 25:19-…
These are the generations of Izhak bar Abraham. And because the appearance of Izhak resembled the appearance of Abraham, the sons of men said, In truth Abraham begat Izhak. And Izhak was the son of forty years when he took Rivekah, the daughter of Bethuel the Aramite, who was of Padan Aram, the sister of Laban the Aramite, unto him for a wife. And Izhak went to the mountain of worship, the place where his father had bound him. And Izhak in his prayer turned the attention of the Holy One, blessed be He! from that which He had decreed concerning him who had been childless. And he was enlarged, and Rivekah his wife was with child. And the children pressed in her womb as men doing battle. And she said, If this is the anguish of a mother, what then are children to me? And she went into the school of Shem Rabba to supplicate mercy before the Lord. [JERUSALEM. And the children pressed in her womb, and she said, If such be the anguish of a mother, what now is life, that children are to be mine? And she went to supplicate mercy before the Lord in the beth midrash of Shem Rabba.] And the Lord said to her, Two peoples are in thy womb, and two kingdoms from thy womb shall be separated; and one kingdom shall be stronger than the other, and the elder shall serve the younger, if the children of the younger will keep the commandments of the Law.

And the lads grew; and Esau was a man of idleness to catch birds and beasts, a man going forth into the field to kill lives, as Nimrod had killed, and Hanok his son. But Jakob was a man peaceful in his words, a minister of the instruction-house of Eber, seeking instruction before the Lord. And Izhak loved Esau, for words of deceit were in his mouth; but Rivekah loved Jakob.

Notice how the Aramaic Targum describes Esau as going into the field to “kill lives,” and parallels him to Nimrod who was known as a mighty hunter, and also a man who worked great iniquity through idol worship (dealing with demons).  Jacob on the other hand is paralleled to being a man of peace, dwelling with God, and seeking instruction (just like Abraham).  In addition to this, Midrash Rabbah Bereshit, Parashat 63, Part 6 (מדרש רבה בראשית פרשה סג סימן ו) has the following to say regarding Jacob and Esau.

Midrash Rabbah Bereshit, Parashat 63, Part 6
And the Children struggled together (Wayyithrozazu) within her (Bereshit / Genesis 25:22).  Rabbi Johanan and Resh Lakish discussed this.  Rabbi Johanan said, Each ran to slay the other, Resh Lakish said, Each annulled (mattir) the laws (Ziwwuyaw) of the other.  Rabbi Berekiah observed in Rabbi Levi’s name, Do not think that only after issuing into the light of the world was he (Esau) antagonistic to him, but even while still in his mother’s womb his fist was stretched out against him, thus it is written, The wicked stretch out their fists (zoru) from the womb (Tehillim / Psalms 58:4).  And the Children struggled together within her.  They sought to run within her.  When she stood near synagogues or schools, Jacob struggled to come out; hence it is written, before I formed you in the belly I knew you (Jeremiah 1:5).  While when she passed idolatrous temples, Esau eagerly struggled to come out; hence it is written, The wicked are estranged from the womb (Tehillim / Psalms 58:4).

According to Midrash Rabbah Bereshit, Parashat 63, Part 6, the rabbis say that in the womb, each man run to slay the other, how each annulled the laws of the other, and the children struggled together in the womb.  The interpretation is that Esau struggled to come out of idolatrous temples, and Jacob struggled to come out of synagogues and schools.  Based upon the Gezerah shavah interpretation of the Scriptures, it is interesting to study the similarity between the interpretation from the rabbis that appears to be very consistent with the historical account of Esau and his descendents (Edom).

In the parashah text on Bereshit / Genesis 25:30 it says about Esau, עַל-כֵּן קָרָא-שְׁמוֹ אֱדוֹם “his name will be called Edom,” a nation of people who became known as those who do not live by faith (Ezekiel 24:12-14).  In Romans 9:10-13, the Apostle Paul wrote of Jacob and Esau, one who walked in faith and the other who walked in sin.  The Lord God chooses Jacob to be the father of His chosen people because he was a man of faith.  The Lord rejected Esau because he did not care about the covenant promises indicated by selling his birthright and taking from the daughters of the land of Canaan (Bereshit / Genesis 26:34).  Jacob on the other hand regarded the covenant of Abraham and worked to obtain the covenant and blessing of the Lord.

The Scriptures tell us the Lord had a plan for both Jacob and Esau from before they were born.  In a similar manner, the Lord has a plan for us as well.  In the Scriptures, the Lord chose Jacob, demonstrating we are to live by faith before Him.  According to the Apostolic Writings, God’s plan for us is to believe in Yeshua the Messiah, to trust in His promises, and to obey His commands.  If you would like to live by faith, you can do so by trusting in the way that God has established, that is by faith in the Messiah Yeshua. BTT_Parashat Toldot-2014

Bits of Torah Truths, Parshiot Nitzavim and Vayelech, How important is...