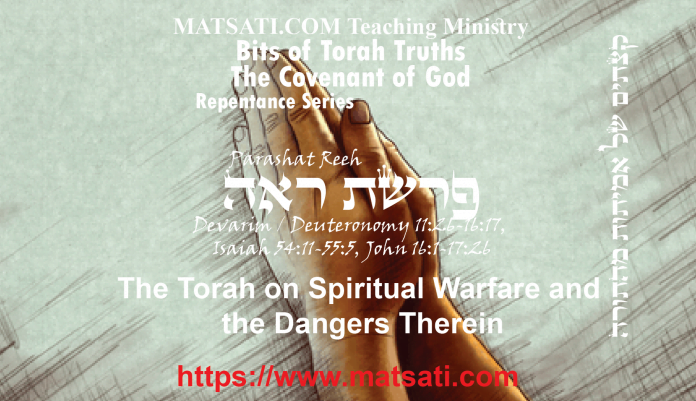 There are two types of people when it comes to spiritual warfare.  One type of person over-emphasizes spiritual warfare, and the other under-emphasizes it.  For the one who over-emphasizes, he blames every sin, conflict, and problem on demons, as oppression or possession, etc.  Others completely ignore the spiritual realm saying the Torah does not speak of such things.  The key however is to find the correct balance between the two.  In the Apostolic Writings, Yeshua sometimes cast demons out of people.  At other times He healed people with no mention of the demonic.  The apostle Paul instructed believers to wage war against the sin in themselves (Romans 6) and warns us to oppose the schemes of the evil one (Ephesians 6:10-18). The way I would like to approach this topic is by first surveying the rabbinic literature and then to look at the Torah (this week’s Portion).

Surveying the rabbinic literature for the word “demon” leads to many results which establish the fact that Judaism does in fact discuss demons, the demonic realm, and manifestations and correlate these to the Torah text. The following is a small selection from the literature survey from the Talmud and the Mishnah:

More references to demons in the rabbinic literature may be found in the Midrashim (note how we have run into this many times in Midrash Tehillim), and the Jewish commentaries, too many to cite here.  Even the classical commentators such as Rashi on Shemot / Exodus 8:14 state demons were involved in the Egyptian sorcerers performing their arts before Moshe.

Shemot / Exodus 8:14
וַיַּעֲשׂוּ־כֵ֨ן הַחַרְטֻמִּ֧ים בְּלָטֵיהֶ֛ם לְהוֹצִ֥יא אֶת־הַכִּנִּ֖ים וְלֹ֣א יָכֹ֑לוּ וַתְּהִי֙ הַכִּנָּ֔ם בָּאָדָ֖ם וּבַבְּהֵמָֽה׃ 8:14 And the necromancers did likewise with their charms to bring forth the lice, [attempting to create them and bring them forth from some other place], but they could not do so, [for the demon (of their art) is ineffective with a creature smaller than a barley corn]. And the louse [swarm] was in man and beast. (The Rashi Chumash by Rabbi Shraga Silverstein)

Rashi on Shemot / Exodus 8:14
ולא יכלו BUT THEY COULD NOT — for the demon (through whose agency this was to be done) is powerless in the case of a creature smaller than a barley corn) (Talmud Bavli Sanhedrin 67b). Therefore they had to admit,

Taking the rabbinic literature and commentaries into context, we read the opening verses from this week’s Torah portion which states the following:

The Lord tells the people that they are to carefully observe these commands in the land they are possessing as long as they live on the earth. He says they are to destroy all of the sites the peoples worshiped their gods, no matter where these sites are located. They are to tare them down and burn them with fire. They are warned not to worship the Lord their God like the nations worshiped their gods. The Lord tells the people that He wants His people to establish His name in the Land and in the place that He chooses. He tells the people how important it is to bring their offerings to the Lord and not to the false gods of the nations. The Lord will bless the people for putting Him first in their lives. In Devarim / Deuteronomy 12:8 He says לא תעשון ככל אשר אנחנו עשים פה היום איש כל־הישר בעיניו 12:8 You shall not act at all as we now act here, every man as he pleases. The Lord warns the people how dangerous it is to live their lives however they want to, worshiping the Lord the way they want to, as opposed to doing so according to His Word. The Apostle Paul speaks of the spiritual forces (the places Lord wants us to destroy) and the way in which we may be protected from the plan of the evil one.  He says in Ephesians 6:10-12, “Finally, be strong in the Lord and in his mighty power. Put on the full armor of God so that you can take your stand against the devil’s schemes. For our struggle is not against flesh and blood, but against the rulers, against the authorities, against the powers of this dark world and against the spiritual forces of evil in the heavenly realms.” He goes on to provide us in Ephesians 6:13-18 a description of the armor God gives us. We are to stand firm with the belt of truth, the breastplate of righteousness, the gospel of peace, the shield of faith, the helmet of salvation, the sword of the Spirit, and to pray in the Spirit. These things Paul is speaking of, truth, righteousness, peace, faith, salvation, the Word of God, and prayer are what God had given to His people in the Torah.  How these things relate to spiritual warfare is related to how we are to know the truth, believe the truth, and speak the truth. We rest in the fact that we are empowered by God’s Spirit to live righteously, and to sanctify our lives in holiness and in truth.  We are to proclaim this gospel no matter how much resistance we face. We are not to waver in our faith, trusting God’s promises no matter how strongly we are attacked. This week’s Torah portion, coupled with the rabbinic literature and the words of Paul teaches us some crucial truths.  The Lord calls us to a certain responsibility, to put away and destroy the ways of the nations, and how we are to stand strong in the Lord’s power in our lives through His Spirit.  This ultimately gives us the victory against spiritual forces of evil in the world.  Note how Yeshua handled the temptations he received in the wilderness (Matthew 4:1-11).  Each temptation was combated with the words “it is written” quoting from God’s Torah.  The Word of the living God is the most powerful weapon against the temptations of the evil one. Note what David wrote saying, “I have hidden your word in my heart that I might not sin against you” (Tehillim / Psalm 119:11).

In addition to this, note a word of caution concerning spiritual warfare.  The name of Yeshua is not a magic incantation that causes demons to flee from before us. The seven sons of Sceva are an example of what can happen when people presume an authority they have not been given (Acts 19:13-16). We are not given power and authority over the spiritual forces that are at work such that we can start talking to demons, we run the risk of being led astray as Eve was (Bereshit / Genesis 3:1-7).  Our focus is to be upon the Lord God Almighty and His Messiah Yeshua.  This is the point of the opening verses of this week’s Torah Portion to destroy all of the places of worship of the nations and to not serve or worship the Lord God the way they served or worshiped their gods.  This week’s Torah portions reminds us that we rely on God’s power, and not our own.  We put on the whole armor of God which is synonymous to being led by the Spirit of God, obeying His commands, and ordering our lives according to His Words.  We draw on the power of God through faith, faithfulness and prayer.  We pray in perseverance and holiness, making our appeal to God. We stand firm (Ephesians 6:13-14); we submit to the rule of God’s word in our lives; we resist the devil’s work (James 4:7, sin and unrighteousness), knowing that the Lord of hosts is our protector. Being a child of God by faith in the Messiah Yeshua, we have been given power and authority over the evil spiritual forces in this world.  If we trust and rely upon the Lord each day in this way, we can say without a doubt: “Truly he is my rock and my salvation; he is my fortress, I will never be shaken” (Tehillim / Psalm 62:2).

Dr Duane Miller – The Spirit of Deception and Inability to...

Tehillim / Psalms 70, Part 2, Those who seek instruction from...