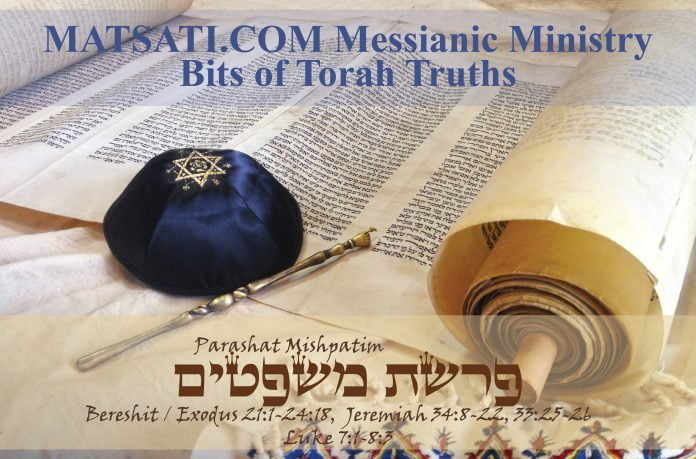 This week’s study contain many ordinances and rulings are made to be fair and the most interesting aspect is that in the command of an eye for an eye, that we learn we are to do unto others as we would have them do unto us.  These Scriptures describe not only the justice of God, but also His mercy and instruction for our lives.

The Golden Rule is believed to originate from a well known verse from the Torah that states ואהבת לרעך כמוך “and love your neighbor as yourself.” (Vayikra / Leviticus 19:18)  This is the earliest known form of the Golden Rule which dates to 1300-1400 BCE.  According to the Jewish Encyclopedia, Hillel the Elder (110 BCE – 10 CE), (Talmud Bavli Shabbat 15a) used this verse as a basis for his teaching of the Torah.  For example, once, he was challenged by a ger toshav who asked to be converted under the condition that the Torah be explained to him while he stood on one foot.  Hillel accepted him as a candidate for conversion to Judaism, drawing upon Vayikra / Leviticus 19:18, he said “do unto others as you would have them do unto you” (ואהבת לרעך כמוך).  The Babylonian Talmud, Shabbat 31a states specifically, “What is hateful to you, do not do to your fellow: this is the whole Torah; the rest is the explanation; go and learn.”  Hillel recognized love as a fundamental underlying principle of biblical ethics.  Rabbi Akiba agreed and suggested that the principle of love must have its foundation in Genesis chapter 1, which teaches that all men are the offspring of Adam who was made in the image of God (Midrash Rabbah Bereshit, Parashat 24).

The rabbis had the following to say about this week’s portion according to Midrash Rabbah Shemot, Parashat 30, Parts 6 and 9.

Midrash Rabbah Shemot, Parashat 30, Part 6
Observe how much God gave commandments on every detail.  It says, And if men strive together, and hurt a woman with child (Shemot / Exodus 21:22), then if she dies, You will give life for life (Shemot / Exodus 21:23), but if she does not die, there is monetary punishment, though the child had not seen the light, being still in the mother’s womb; but the Torah gives injunctions to Israel on everything.  It can be compared to a prince whom his father exhorted to be careful not to stumble over anything and hurt himself because he was as dear to him as the apple of his eye.  God, likewise, exhorted Israel concerning the commandments, because they are more beloved to Him than the angels, as it says, You are the children of the Lord your God (Devarim / Deuteronomy 14:1) and David also says, O Lord our God, You answered them; You were a forgiving God unto them, though You took vengeance of their misdeeds (Tehillim / Psalms 99:8).

Midrash Rabbah Shemot, Parashat 30, Part 9
Another explanation of Now these are the ordinances.  It is written, He declares His word unto Jacob (Tehillim / Psalms 147:19), these are the Ten Commandments; His statutes and His ordinances unto Israel, these are the ordinances.  The ways of God differ from those of man; whereas man directs others to do a thing while he does nothing, God only tells Israel to do and observe those things which He himself does.  It is related to Rabban Gamliel, rabbi Joshua, rabbi Eliezer son of Azariah, and rabbi Akiva that they went to Rom and taught there, The ways of God are not as those of man, who makes a decree enjoining others to do a thing while he does nothing; God not being so.  There happened to be a sectarian there, who accosted them as they were going out with the taunt, Your words are only falsehood.  Did you not say that God says a thing and fulfills it?  Then why does He not observe the Shabbat?  They replied, Wretch.  Is not a man permitted to carry on the Shabbat in his own courtyard?  He replied, Yes.  Whereupon they said to him, Both the higher and lower regions are the courtyard of God, as it says, The whole earth is full of His glory (Isaiah 6:3), and even if a man carries a distance of his own height, does he transgress?  The other agreed.  Then they said, it is written, Do not I fill heaven and earth? (Jeremiah 23:24).

Notice how in Midrash Rabbah Shemot, Parashat 30, Part 6, the rabbis say that God gave commandments on every detail and cite the example from Shemot / Exodus 21:22 on men striving together and hurt a woman with child.  An important point to mention here is that according to the Torah, the Scriptures describe the unborn baby as a “child” (כב   וְכִי-יִנָּצוּ אֲנָשִׁים וְנָגְפוּ אִשָּׁה הָרָה וְיָצְאוּ יְלָדֶיהָ וְלֹא יִהְיֶה אָסוֹן עָנוֹשׁ יֵעָנֵשׁ כַּאֲשֶׁר יָשִׁית עָלָיו בַּעַל הָאִשָּׁה וְנָתַן בִּפְלִלִים:).  The unborn baby is not a piece of flesh to simply be discarded at an abortion clinic.  This life is very precious to the Lord, and Scripture describes the Lord God Himself forming and shaping the baby as he grows in the womb (Jeremiah 1:5).  The rabbis continue and describe the Love of God, and it was by the motivation of love that God gave His Torah to His people.  The Torah was not given to the angels, it was given to the children of God.

Midrash Rabbah Shemot, Parashat 30, Part 9 states that the ways of God differ from the ways of man.  The difference is described as “man directs others to do a thing while he does nothing, God only tells Israel to do and observe those things which He himself does.”  The idea is that the Lord God in heaven is asking us to do the things that He Himself does.  This is the entire concept that is described in the Torah regarding becoming a bond-slave to the Lord, or to Christ according to the Apostolic Writings.  In the Hebrew text, the Scriptures say in Shemot / Exodus 21:3, ג  אִם-בְּגַפּוֹ יָבֹא בְּגַפּוֹ יֵצֵא אִם-בַּעַל אִשָּׁה הוּא וְיָצְאָה אִשְׁתּוֹ עִמּוֹ: 21:3 ‘If he comes alone, he shall go out alone; if he is the husband of a wife, then his wife shall go out with him. (NASB)  The English translation states “if he comes alone” using the Hebrew word בְּגַפּוֹ.  Generally, the Hebrew word לבד meaning “alone, by himself, unaccompanied” or the word יחידי “single, individual, alone” are used to describe one who is alone, however, Moshe writes בְּגַפּוֹ from the root word גוף meaning “body.”  The idea is that the man who becomes a slave, comes with nothing but himself (his body).  The Scriptures say that if he has a wife, she will go out with him when he is set free.  If he finds a wife in his masters household she is to remain when he goes free. And if the servant decides to dedicate his life to his master, they are to go before God and to the door or door post using an awe to put a ring in his ear to indicate that he has dedicated his life to his master as a “bond-servant” for the remainder of his life.  In addition, note how the Hebrew text is written ו  וְהִגִּישׁוֹ אֲדֹנָיו אֶל-הָאֱלֹהִים וְהִגִּישׁוֹ אֶל-הַדֶּלֶת אוֹ אֶל-הַמְּזוּזָה וְרָצַע אֲדֹנָיו אֶת-אָזְנוֹ בַּמַּרְצֵעַ וַעֲבָדוֹ לְעֹלָם: 21:6 then his master shall bring him to God, then he shall bring him to the door or the doorpost. And his master shall pierce his ear with an awl; and he shall serve him permanently. (NASB)  Moshe writes saying וְהִגִּישׁוֹ “and he brought him near” unto God, and he brought him near to “the door” (הַדֶּלֶת) or to “the mezuzah” (הַמְּזוּזָה, door post).  The important point to take note of is that the mezuzah which is hung on the door post also contains a small Torah scroll.  The description here is of the master forcing an awe through the servants ear fixing a hole in the ear against the mezuzah, against the Torah scroll, and blood is shed.  This typifies making a covenant before God.  Can you see the parallels here to Pesach (Passover), the mezuzah (door post), the Torah, drawing near to the Lord, becoming a part of a righteous family and dedicating ones life to the master?

The Apostles taught this very thing regarding these Scriptures from Parashat Mishpatim in the Apostolic Writings.  The Apostle Paul was teaching Torah when he wrote the following, Romans 6:16 Do you not know that when you present yourselves to someone as slaves for obedience, you are slaves of the one whom you obey, either of sin resulting in death, or of obedience resulting in righteousness? 6:17 But thanks be to God that though you were slaves of sin, you became obedient from the heart to that form of teaching to which you were committed, 6:18 and having been freed from sin, you became slaves of righteousness. (NASB)  Being a slave to righteousness means being a slave to the ways of God which are righteousness, truth, justice, and mercy, the very acts of obeying God’s Torah.  In addition, we read many of the authors of the New Testament making very similar comments regarding the bond-servant.  Romans 1:1 “Paul, a bond-servant of Christ Jesus…,” Philippians 1:1 “Paul and Timothy, bond-servants of Christ Jesus…,” Colossians 1:7 “…Epaphras, our beloved fellow bond-servant,” Colossians 4:7 “…Tychicus, {our} beloved brother and faithful servant and fellow bond-servant in the Lord,” James 1:1 “James, a bond-servant of God and of the Lord Jesus Christ,” 2 Peter 1:1 “Simon Peter, a bond-servant and apostle of Jesus Christ…,” and Jude 1:1 “Jude, a bond-servant of Jesus Christ…”  They all proclaimed themselves to be “bond-servants,” willingly committing to serve their Master for life according to His Torah.  According to Romans 6:16-18, in this world, we will always be a slave to something, why not be slaves to righteousness and bond-servants of Christ? BTT_Parashat Mishpatim-2015

Bits of Torah Truths, Parshiot Vayakhel and Pekudei, In Christ even...