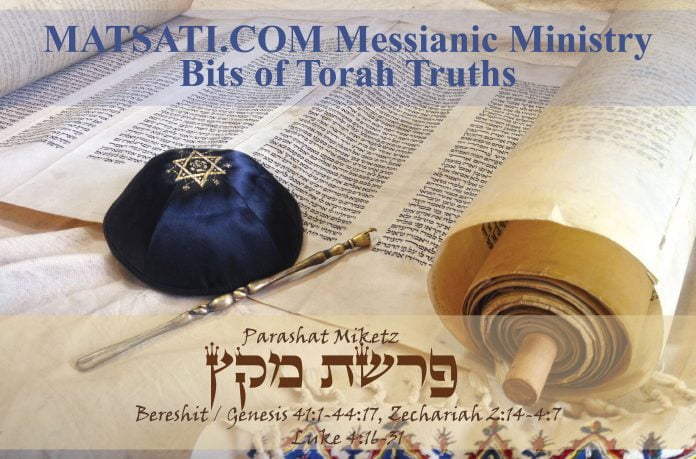 In this week’s reading from Parashat Miketz (Shemot / Genesis 41:1-44:17) Pharaoh has two dreams that speak of a future time of both prosperity and drought (41:1-13).  Pharaoh calls for Joseph and asks him to interpret his dreams.  Joseph says that only God can give an answer of Shalom (שְׁלוֹם, peace) and then he gives Pharaoh the interpretation from the Lord (41:16-38).  Seeing that the Spirit of the Lord God was with Joseph, Pharaoh places all the power of Egypt into his hands (41:39-46).  The seven years of plenty come and Joseph stores away the grain (41:46-53) the seven years of famine comes and everyone buys food from Joseph (41:54-42:6) including his brothers.  The Scriptures say that Joseph recognizes his brothers and tests them, accuses them of being spies (42:7-15) and places some of them in jail for 3 days.  This week’s Parashah ends with the brothers returning to Egypt with Benjamin their brother.  Joseph acts as a deceiver and tricks his brothers placing his silver cup in Benjamin’s sack of grain (44:1-17) and accuses them of being thieves and spies.  Why do you think Joseph is acting as the accuser against his brothers within the context of this week’s and last week’s Torah Portions?

Bereshit / Genesis 42:6-11
42:6 Now Joseph was the ruler over the land; he was the one who sold to all the people of the land. And Joseph’s brothers came and bowed down to him with their faces to the ground. 42:7 When Joseph saw his brothers he recognized them, but he disguised himself to them and spoke to them harshly. And he said to them, ‘Where have you come from?’ And they said, ‘From the land of Canaan, to buy food.’ 42:8 But Joseph had recognized his brothers, although they did not recognize him. 42:9 Joseph remembered the dreams which he had about them, and said to them, ‘You are spies; you have come to look at the undefended parts of our land.’ 42:10 Then they said to him, ‘No, my lord, but your servants have come to buy food. 42:11 ‘We are all sons of one man; we are honest men, your servants are not spies.’ (NASB)

Reading through the narrative in the story of Joseph from Parshiot Vayeshev and Miketz, the Lord had a plan for Joseph’s life, which was to save many lives from the famine of the land.  In Parashat Miketz, Joseph, after many years, finally sees his brothers, and the question is “why does he choose to conceal his identity upon seeing his brothers?” And, “Why does he accuse them of being spies?”  In Joseph’s dealings with his brothers, he appears to function as an adversary against his brothers.  The Scriptures do not call Joseph an adversary explicitly, however we get the general connotation of “adversary” being implied by Joseph’s actions against his brothers.

Thinking on the topic of Joseph behaving as an adversary against his brothers, this draws to think about the Hebrew word Satan (הַשָּׂטָן) and the concept of the Evil Tempter.  Searching for the word “Satan” (שטן) and “HaSatan” (השטן) in the Tanach produces 5 and 16 search results, respectively.  The term used in the MT for the adversary (Satan) has been applied to the enemy (1 Kings 5:18, 11:14, 23, 25), is used to describe a traitor in battle (1 Samuel 29:4), to an accuser before a judgment seat (Tehillim / Psalms 59:6), and an opponent (2 Samuel 19:22-23).  The word also denotes an antagonist who places an obstacle in the way (Bamidbar / Numbers 22:32), in the example of the Angel of the Lord and Bilam.  The idea is that based upon the Torah and the prophets, the concept of Satan being a distinct being who is opposed to the Lord God in heaven was not yet known (www.jewishencyclopedia.com).  However, in the book of Job, we do find the concept of Satan as a distinct being who gathered together with other celestial beings or “sons of God,” before the Lord.  The idea that Satan is a distinct being is derived from the answer and response taking place from the inquiry of God asking where he (Satan) had come from, he responds saying, “From going to and fro in the earth, and from walking up and down in it” (Job 1:7)  Based on the biblical narrative, the question, response, and dialogue that follows appears to characterize Satan as a member of the divine council (e.g. the deep council, see Parashat Vayeshev) that watches over humanities activities.  Satan however has an evil purpose of searching out man’s sins and appearing before the Lord as man’s accuser and seeks to test man through physical suffering to determine his resolve in his faith and trust in the Lord God Almighty.  These things are all for the purpose of the destruction of the man of faith.  Based upon the book of Job, Satan has no power however to independently act against God’s children, he requires permission before he can act.

The rabbis in Midrash Rabbah Bereshit, Parashat 89, Part 1 (מדרש רבה בראשית פרשה פט סימן א) speak of an Evil Tempter who exists and is able to cause trouble for mankind.

Midrash Rabbah Bereshit, Parashat 89, Part 1 states that the Lord is the one who sets the appointed times for all things.  The example they give is from Joseph’s life and the written text that says “And it came to pass at the end of two full years” (Bereshit / Genesis 41:1) commenting how the Lord sets an end to darkness and He is the one who establishes the period of time for certain events (e.g. the world to spend in darkness).  A parallel is then drawn to “darkness” and the “Evil Tempter” (יצר הרע).  Notice how the Evil Tempter is described as the Tetzer Hara (יצר הרע), the evil inclination according to the Midrash.  The context of the Evil Tempter is to the book of Job indicated by the reference to Job (שם איוב כ״ח) in the midrash, and the way in which the midrash is written saying, שכל זמן שיצר הרע בעולם “as long as the Evil Tempter exists in the world,” and נעקר יצר הרע מן העולם “to emasculate or castrate, the Evil Tempter from the world,” suggests that the Yetzer Hara (Evil Tempter) is taking on a personification, as we read in the book of Job, Satan an adversary of mankind and of God.  The rabbis continue saying that this Evil Tempter exists in the world, thick darkness and the shadow of death are in the world, and when the Evil tempter is removed, both the darkness and the shadow of death will also be removed.  The Lord is the one who establishes and sets the times for this to occur.  These things are paralleled to Pharaoh’s dream and the appointed time for the things he dreamed that were about to transpire (come to pass).  The way the midrash is written, we get the imagery that the Evil Tempter acts independently to accuse but must get the permission of God to move against the righteous.  The question is however, “do demons tempt?” and “Does Satan tempt man?”

On the other hand, Satan and his host are mentioned comparatively seldom in the Talmud and Midrash.  Though Satan is infrequently mentioned in the rabbinic literature, the material on this subject is not without importance.  In the older or tannaitic literature the name of Satan is met with but rarely. Also, in Pirki Avot 4:11, sin itself, and not Satan, is the accuser (http://www.sefaria.org/Pirkei_Avot.4).

The term κατήγωρ becoming a standing epithet of Satan in the New Testament, and is also applied to him by the later Talmudic teachers.  In Talmud Bavli, Tosefta Shabbat 17:3 (18:3) it is stated that the angels of Satan accompany the blasphemer on his way, according to Tehillim / Psalms 65:6, while a comparison of Midrash Rabbah Bereshit, Parashat 33, part 7 with Sifre Bamidbar 25:1 shows how reference to Satan was introduced by the Amoraim into tannaitic sayings and in like manner “Satan” is substituted for “angel” in the Talmud Bavli Nedarim 32a.  In addition to this, the Angelology of the Talmud, shows that according to the older view (until about 200 C.E.), punishment was inflicted by angels.  This may be the foundation stones for Judaism’s later incorporation of Satan being the one who inflicts punishment.  For example, the Jerusalem Talmud, completed about 400 CE, is more reticent in its written form and its written form occurs in the same time frame as the Apostolic Writings.  Midrash Rabbah Bereshit, Parashat 19 describes Satan as a mighty prince of angels in heaven.  Like the angels, he flies through the air (Midrash Rabba Bereshit, Parashat 19), and can assume any form, as of a bird (Talmud Bavli Sanhedrin 107a), a stag / horse (Talmud Bavli Sanhedrin 95a), a woman (Talmud Bavlie Kidushin 81a), a beggar (Talmud Bavli Kidushin 81a), he is said to skip (Talmud Bavli Pesachim 112b, and Megillah 11b), in allusion to his appearance in the form of a goat (e.g. the goat-demons mentioned in the Torah, Vayikra / Leviticus 17:7).

Based upon this week’s Torah portion, Joseph’s dealings with his brothers, he appears to function as an adversary against his brothers.  It is important to note that Joseph did not act to “tempt” his brothers, he simply functioned as an accuser.  In a similar manner, we do not read in the Scriptures that Satan or his demons tempt any man.  They function to deceive, to bind someone up in bondage, and to destroy.  This seems to be what is implied by James in his epistle regarding being tempted of God, he said in James 1:14 But each one is tempted when he is carried away and enticed by his own lust. (NASB)  A man is drawn to sin by his own lusts.  This draws us back to the concept of the Evil Tempter is described as the Tetzer Hara (יצר הרע), the evil inclination in the midrash.  Satan is the incarnation of all evil, his thoughts and activities are devoted to the destruction of man.  The impulse to evil, Tetzer Hara (יצר הרע), is different from Satan even though the midrash provides a sort of personality to the evil inclination.  The Evil One has the capacity to lead astray, but it is our choice to choose to sin by our being drawn away into temptation due to the lusts of the flesh.  The wonderful point of the Torah portion for this week is that God has provided a means for deliverance and salvation, and a means to escape from the clutches of the Evil One.  The Lord has given us the power and authority to overcome the Evil One in the Name of Yeshua the Messiah.  We have also been given the power to overcome sin (the Evil Tempter), to overcome the evil inclination by the transforming of ourselves to the new man and the indwelling of God’s Holy Spirit.  The Lord wants victory for our lives, and He has provided victory over sin and the demonic forces that are at work in this world.  In Yeshua the Messiah, we have all of the promises of God, who has saved us and is able to deliver us from all situations.  Praise the Lord and Halleluia! BTT_Parashat Miketz-2014

Has the Torah Really Passed Away? Some Very Relevant Commands for...

How Marijuana Effects the Brain – A Spiritual Insight

Does Elohim mean many?

Bits of Torah Truths, Parashat Bechukotai, Walking in the Testimonies