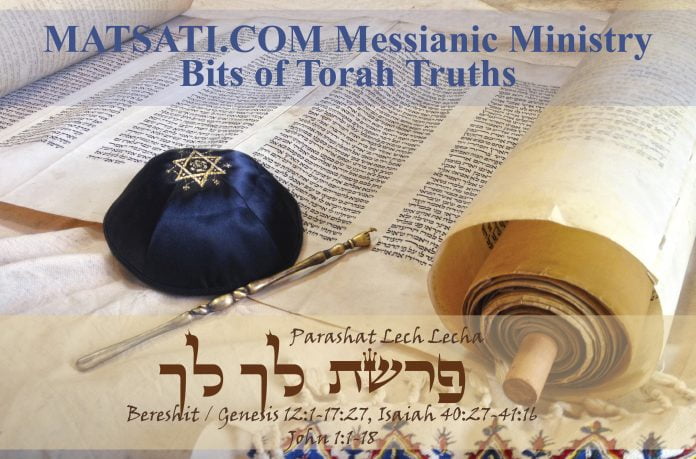 This week’s reading is from Parashat Lech Lecha (Shemot / Genesis 12:1-17:27), the Lord calls to Abram to leave his father’s house and land, to go to a place that He will show him.  In the opening verses of the portion this week, the Lord promises to bless Abram and make him into a great nation (וְאֶעֶשְֹךָ לְגוֹי גָּדוֹל).  In addition to this, the Lord says, those who bless him will be blessed, and those who curse him will be cursed.  Based upon the progression shown in the opening verses, the covenant that God is making with Abram, the promises go personally to Abram and to his descendents, and then on to all the world.  The reason the Lord singled out Abram from all the rest is unknown.  However, according to Bereshit / Genesis 20:7, the Lord God Almighty says Abraham is a great man, and that he was a prophet of God.

Bereshit / Genesis 20:6-8
20:6 Then God said to him in the dream, ‘Yes, I know that in the integrity of your heart you have done this, and I also kept you from sinning against Me; therefore I did not let you touch her. 20:7 ‘Now therefore, restore the man’s wife, for he is a prophet, and he will pray for you and you will live. But if you do not restore her, know that you shall surely die, you and all who are yours.’ 20:8 So Abimelech arose early in the morning and called all his servants and told all these things in their hearing; and the men were greatly frightened. (NASB)

According to the Scriptures, the Lord speaks of Abraham as His prophet.  Studying the Tanach we learn that Abram’s father was an idolater, a Chaldean idolater (Joshua 24:2).  Based upon the way the Lord calls Abram out, Abram is unique in the sense that a blessing would come through him and his descendents.  Based upon the definition of a “prophet” Abraham appears to have served as an intermediary on behalf of humanity and God.

Based upon these Scriptures, examining these few scriptures from the Torah, we can conclude that Abraham proclaimed the truth about the One True God to the nations around him.  The Scriptures appear to tell us that he (Abram) acted as a guide to the nations.  This is the rabbinic understanding of Abraham, that he had been given a special revelation from God, to walk in righteousness and truth, as compared to the other nations.  The opening Parashah of Midrash Rabbah Bereshit on Parashat Lech Lecha has the following to say concerning our father Abraham (Midrash Rabbah Bereshit, Parashat 39, Part 1, מדרש רבה בראשית פרשה לט סימן א):

Midrash Rabbah Bereshit, Parashat 39, Part 1
Now the Lord said unto Abram, Get You out from your country, etc (Bereshit / Genesis 12:1).  Rabbi Issac commenced his discourse with, Listen, O daughter, and consider, and inclined your ear; forget also your own people, and your fathers house (Tehillim / Psalms 45:2).  Said rabbi Isaac, This may be compared to a man who was traveling from place to place when he saw a building in flames.  Is it possible that this building lacks a person to look after it?  He wondered.  The owner of the building looked out and said, I am the owner of the building.  Similarly, because Abraham our father said, Is it conceivable that the world is without a guide? The Holy One blessed be He, looked out and said to him, I am the Guide, the Sovereign of the Universe.  So will the king desire your beauty (Tehillim / Psalms 1:2) e.g. to make you glorious in the world.  For he is your Lord and do homage unto him, hence, The Lord said unto Abraham, Get you, etc.

The midrash opens with comments on the opening verse of the Torah portion, and compares the Lord’s calling to Abram to the daughter who has been married, who is going to her husband’s house, she is to forget her former ways because she is entering into a new life with her husband.  This seems to be what the Lord is calling Abram to do leaving his family and his land, his former ways, with the parallel of being married to the Lord.

Rabbi Isaac compared this verse to a man who was traveling and saw a building in flames and wondered about the person who was given responsibility of the building that was in flames.  Interestingly, the owner of the building looked out and said that he was the one responsible for the building.  Nothing is said however, regarding the owner looking out while the building is burning.  Seems either the owner is not aware of the flames, or might there be something more the rabbis are wanting us to observe in the parable?  The parable ends with Abraham being called out to be a guide unto the world.  Based on the parable, it might be that the world is considered to be on fire, by reason of sin, and the people living in the world are not even be aware of the danger to their lives.  It takes someone who is standing outside, who is called by God, to see and make known the flames that are consuming the building.  It is in this way that the Lord God Almighty looked to Abram and said that He is a guide to the world.  The problem is, the world was not listening.

Why did God choose Abram to be His servant and, through him, bring ancient Israel into existence as a nation?  What did God have in mind, and why did He call Abram into His service at this particular time in history?  Abram was from a family of idol worshipers.  What motivated the Lord to call Abram out from his fathers house and from his people?  We might be able to take a hint from the biblical narrative thus far.  According to the biblical narrative, following the Flood in the days of Noah, the earth’s inhabitants once again began to turn their back on God.  This happened pretty much immediately at the tower of Babel.  As a result, the Lord caused the people to disperse across the face of the earth by confusing language.  By Abraham’s time all peoples had again grown corrupt.  As a result, the Lord set in motion a major aspect of His plan to draw back mankind to righteousness, truth, and justice, and to offer salvation to all of mankind.  Selecting Abram was a crucial step in God’s long-term plan to turn all nations back to Him.  The remainder of the Bible is woven around God’s plan to reconcile all humanity to Himself.  Part of the Lord’s plan, as we see in the midrash, was for the nations to recognize they are on fire because of ther sin about to be consumed (destroyed).  The Lord desires that all peoples recognize the difference between two conflicting ways of life, the one that follows sin, unrighteousness, corruption, lies, stealing, murders, lust, etc., and the other, to learn and walk in His ways and to turn from sin, to walk in truth, justice, and righteousness.  This is the message that Abraham brought to the world, knowledge of the One True God, and to walk in Righteousness, Truth, and Justice before God (like we learned in Parashat Noach, last week).  In God’s promise to Abraham, He brought a great blessing to all nations through His Messiah Yeshua, and the message of Salvation.  The Lord had a plan to bring brought His Messiah in a particular way, that would demonstrate His power and strength according to Isaiah 53:1-3:

Isaiah 53:1-3
53:1 Who has believed our message? And to whom has the arm of the Lord been revealed? 53:2 For He grew up before Him like a tender shoot, And like a root out of parched ground; He has no stately form or majesty That we should look upon Him, Nor appearance that we should be attracted to Him. 53:3 He was despised and forsaken of men, A man of sorrows and acquainted with grief; And like one from whom men hide their face He was despised, and we did not esteem Him. (NASB)

Prophetically, Isaiah anticipated two things, first, the oddity of a suffering Messiah, and secondly, the rejection of the Messiah that many would not believed the report.  It is in this way, the Lord God enabled the Messiah to suffer for the sins of the world and to lay his life down on our behalf.  It is also in this way that Yeshua would function as “the arm of the Lord,” a picture of God’s strength, power, and might, that is expressed in the midst of suffering and weakness.  Man’s weakness and God’s suffering illustrate the Lord’s plan that we in our weakness are to rely upon the Lord for everything.  God’s power and strength is demonstrated in Yeshua’s death and resurrection.  During Yeshua ‘s ministry on earth and afterwards demonstrated by the disciples, Yeshua had great authority and power to heal, to set the captive free, to deliver from bondage, and to forgive sin, and He still does today.  The Messiah Yeshua was not simply just another man or just another prophet.  The rabbis taught that the Messiah would have the name of God Himself, He would speak on behalf of the Lord, and perform great signs and miracles for the salvation of Israel and all the world. (Talmud Bavli Sukkah 52a, Zohar Part 3, folio 307)  That is why the Messiah has played such a prominent role in rabbinic theology.  This is also why Judaism continually looked forward to the coming of the Jewish Messiah.  This is who Yeshua the Messiah is for us today.  Believe in Him and be saved, what are you waiting for? BTT_Parashat Lech Lecha-2014

Brain-shrinking killer fungus that cannot be touched is found in Australia...