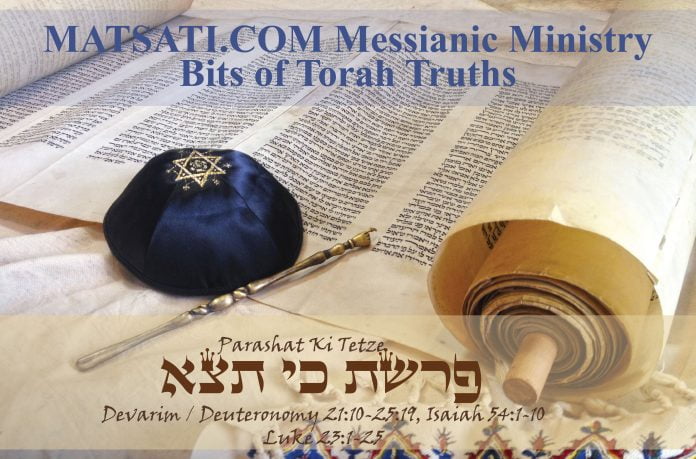 This week the Lord tells us that we are to care for our neighbors things as if they were our own, according to Devarim / Deuteronomy 22:1-4.  The inherent property of this command is to love your neighbor as yourself.  In addition to this, we are told about a good number of sins to be aware of as they are listed above.  As the people of God we are to avoid such things.  These are known in Judaism as the negative commands.  The positive commands this week are related to the instruction to take care of our neighbor’s things if we see something we could help with we are to do so for the good of our neighbor.  We are also told to not have different weights and measures when engaged in business.  This may also be understood as another form of taking care of others regardless of who they are.  The standard for the people of God is to live in justice, truth, and peace with all men on this earth.

The rabbinic understanding of the commandments is that the positive commands require an action to be performed and are considered to bring a person closer to God.  The negative commands are to be avoided.  Violations of the negative commands causes one to become distant from the Lord, and I believe everyone would agree that sin by its very nature separates us from the Lord.  In striving to be closer to God, one attempts to live in accordance with His wishes, to live according to His testimonies, and His Holy Words.  With these things in mind, the rabbis of Midrash Tehillim 49, Part 1 classify both the Torah and Halakhah as pure (glistening like snow), righteous, and holy.  Midrash Tehillim 49, Part 1 says, “Give ear, all you inhabitants of kheled (Tehillim / Psalms 49:2), kheled means the world.  And why is the world kheled?  Because in the time to come the corrosion (khaludah) of the wicked will show on their faces.”  In Tehillim / Psalms 49, David used a rare and unusual noun חָלֶד (kheled, “world”) to describe the earth.  In the Midrash on Tehillim, the rabbis describe the wicked becoming rusty and old in their faces using this word “kheled.”  This may be interpreted as the Torah of God having the capability of maintaining us, keeping us fresh and new, and pleasant before the Lord, before others, and in this world (see Tehillim / Psalms 119).  Sin on the other hand wears one down and wears one old, so much so that it becomes obvious to all by one’s outward appearances.  These are important concepts related to who we are and how we should live.  The midrashic literature has a lot to say concerning the preserving nature of living a righteous life and so does the Apostolic Writings.

According to Midrash Rabbah Devarim, the kind of lifestyle that keeps one whole is summed up within the command on what one is to do if one finds a bird’s nest sitting upon the ground (Devarim / Deuteronomy 21:6).  According to the Scriptures we are to show mercy even to God’s creation.  Having a life filled with grace and mercy is emphasized in the command of happening upon a bird’s nest according to Midrash Tehillim Devarim, Parashat 6, Part 3 (מדרש רבה דברים פרשה ו סימן ג).

The rabbis parallel the meaning of grace upon one’s head with Mishley / Proverbs 1:7 The fear of the Lord is the beginning of knowledge: but fools despise wisdom and instruction. 1:8 My son, hear the instruction of thy father, and forsake not the law of thy mother: 1:9 For they shall be an ornament of grace unto thy head, and chains about thy neck. (KJV)  Obviously this is a reference to what is worn on the High Priest’s head (Shemot / Exodus 28:36), the crown of gold that was constructed from one piece of pure solid gold.  The crown is engraved with the words “Holy to the Lord.”  The Talmud Bavli Sukkah 5 described the eye-witness testimony of Rabbi Eliezer the son of Rabbi Yose who saw the crown in Rome.  Both the Talmud and Josephus inform us that after the destruction of the Second Temple, many of the sacred vessels were plundered and taken to Rome, where they were publicly displayed for many years.  Something that is noteworthy with regard to the crown of gold, the Scriptures state “And it shall be worn on Aaron’s forehead, that he shall carry the iniquity of the holy things, which the children of Israel shall sanctify in all their holy gifts; and it shall always be upon his forehead, that they may be accepted before the Lord.” (Shemot / Exodus 28:38)  Aaron is said to bear the iniquity of the holy things.  How is that possible without the “grace” of God which king Solomon calls “an ornament of grace upon thy head?”

The midrash stats that grace will follow the life of the person who is a child of the Most High God.  Because of God’s grace, pious deeds will accompany the child of God.  Examples that are given are making a parapet for your roof to protect one from falling off the roof, to not wear mingled clothing which parallels lives lived mingled with sin.  Additional parallels to the pious deeds is related to not rounding the corners of the beard, not plowing with two different kinds of animals, not sowing the field with two different kinds of seed, leaving some of the harvest for the poor in the field to reap, and even when engaged in work on the road, and when you happen upon a birds nest, one is to show mercy to the mother and her eggs.  The point is that by the grace and mercy of God, we too are to have grace and mercy towards one another, the land, and even to God’s creation.  All of these things direct us to the two greatest commands in the Torah which were summed up by Yeshua, to love the Lord your God with all your heart, soul, and strength, and to love your neighbor as yourself.  These are the things that follow the life of the one who follows in the footsteps of Yeshua the Messiah.  Yeshua said in Matthew 23, some of the worst cases of sinfulness can be seen among the religious leaders who act in hypocrisy and who presume to go before others “in God’s name.”  A man’s own selfishness causes him to excessively focus on himself.  The strength if this sin is noted in Tehillim / Psalms 49 which says, 49:21 The sinful man, when he is in honor, will have no insight; and when his honor is taken from him, he becomes like a beast and worth nothing. (NASB)  This attitude will prevent a person from experiencing the joys of sharing, giving and having genuine, good quality relationships.  The approach we should take from this study is to consider these commands and the ways in which we can overcome the selfishness in our own minds.  For example, taking the eggs from a helpless and defenseless mother bird.  This command in and of itself tells us that we are to make the conscious decision to change our attitude of selfishness and to decide to think, focus, and plan to do good to others and not serve only ourselves.  One of our goals should be to understand the importance of honoring people as opposed to revering things or money over people.  The Torah portion and the Midrash speaks of the mercy and grace of God, to love one another, these things tell us that we are realize how people and genuine relationships are more important and valuable than having money and material possessions.  The apostle Paul wrote how to overcome selfishness saying, “whatever you do, do all to the glory of God.”  Yeshua also set the ultimate example of His sacrifice for us.  Since selfishness is seeking our own lusts and desires regardless of its impact on others, this is sin that must be overcome.  This should be a glaring reminder for us to examine our lives, to eliminate pride in our lives as best possible, and to walk in the foot steps of Yeshua and seek the Lord by faith for the salvation of our souls.  With the help of the Holy Spirit and a little self determination, we can avoid seeking our own pleasures, and instead seek the good of others and putting Yeshua the Messiah first in our lives. This will manifest the kind of love the Lord desires for us to have in our lives, which “suffers long and is kind” and “does not seek its own.”  In this way we will be counted worthy to partake in the world to come. BTT_Parashat Ki Tetze-2014

A Hardened Heart and the Removal of the Path to Repentance?...

Dr Duane Miller – Why the name “Yahusha” is the Greatest...