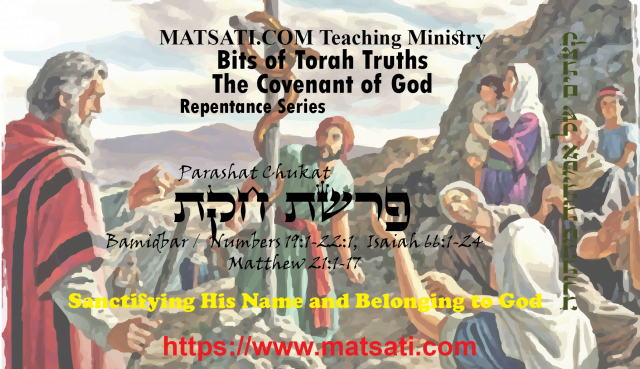 This week’s Torah portion opens with the ashes of the red heifer and those who contract impurity due to touching the dead. We read how one is to sanctify the Lord by obeying what the Lord says one should do when becoming ritually impure due to touching the dead. After seven days having followed God’s command, one is purified by the ashes of the red heifer. The concept being brought out here is how one sanctifies the Name of God by doing what the Lord says he/she should do. Notice the context of the Torah portion which goes on to describe how the people failed to sanctify God’s name twice (once in the wilderness of Zin, 20:2-4, and once more when they set out from Mount Hor by the way of the Red Sea, to go around the land of Edom, 21:4-6) In addition to this, Moshe and Aaron also failed to sanctify the name of the Lord at the waters of Meribah (20:8-13). Parashat Chukat reveals to us failing to sanctify the name of God led to sickness, illness, and death in addition to being stricken by the enemy (i.e. the serpent). How many people today are sick, ill, or dying because they fail to sanctify the name of God in their lives? The Apostle Paul drew out this context when speaking on eating together as opposed to coming together to eat the Lord’s supper according to 1 Corinthians 11:17-32.

1 Corinthians 11:17-32
11:17 But in giving this instruction, I do not praise you, because you come together not for the better but for the worse. 11:18 For, in the first place, when you come together as a church, I hear that divisions exist among you; and in part I believe it. 11:19 For there must also be factions among you, so that those who are approved may become evident among you. 11:20 Therefore when you meet together, it is not to eat the Lord’s Supper, 11:21 for in your eating each one takes his own supper first; and one is hungry and another is drunk. 11:22 What! Do you not have houses in which to eat and drink? Or do you despise the church of God and shame those who have nothing? What shall I say to you? Shall I praise you? In this I will not praise you. 11:23 For I received from the Lord that which I also delivered to you, that the Lord Jesus in the night in which He was betrayed took bread; 11:24 and when He had given thanks, He broke it and said, ‘This is My body, which is for you; do this in remembrance of Me.’ 11:25 In the same way He took the cup also after supper, saying, ‘This cup is the new covenant in My blood; do this, as often as you drink it, in remembrance of Me.’ 11:26 For as often as you eat this bread and drink the cup, you proclaim the Lord’s death until He comes. 11:27 Therefore whoever eats the bread or drinks the cup of the Lord in an unworthy manner, shall be guilty of the body and the blood of the Lord. 11:28 But a man must examine himself, and in so doing he is to eat of the bread and drink of the cup. 11:29 For he who eats and drinks, eats and drinks judgment to himself if he does not judge the body rightly. 11:30 For this reason many among you are weak and sick, and a number sleep. 11:31 But if we judged ourselves rightly, we would not be judged. 11:32 But when we are judged, we are disciplined by the Lord so that we will not be condemned along with the world. (NASB)

Paul speaks of gathering together to partake in the Lord’s table, however some people took it as an opportunity to just eat and get drunk. The point was to take seriously what we have been taught concerning the Messiah and the Lord’s table (referring to the Passover and the breaking of bread). An important point to make here is how Paul speaks of “eating” and “drinking” is pertaining to a meal, as opposed to eating a wafer (unleavened bread) and grape juice only. This was a reference to the Passover meal. Note that the breaking of bread refers to the Lord’s table in the sense of the Passover. The context given to us here by Paul is of the Passover (see 1 Corinthians 11:24-25). Here we find the people partaking in these things in an unworthy manner and thus become guilty of the body and blood of the Lord. They had failed to sanctify the Name of the Lord, Yeshua the Messiah. Paul writes that 11:28 But a man must examine himself, and in so doing he is to eat of the bread and drink of the cup. 11:29 For he who eats and drinks, eats and drinks judgment to himself if he does not judge the body rightly. (NASB) This is in reference to being repentant verses being unrepentant. Paul writes that 11:32 But when we are judged, we are disciplined by the Lord so that we will not be condemned along with the world. (NASB) The issue with the people in the wilderness was found in their unrepentant lifestyles just as we read in Bamidbar / Numbers 20:3 וירב העם עם־משה ויאמרו לאמר ולו גוענו בגוע אחינו לפני יהוה 20:3 The people quarreled with Moses, saying, “If only we had perished when our brothers perished at the instance of the LORD! A similar line of thought may be running through Paul’s words that the people who partake in the Passover were not examining themselves, judging themselves, seeking forgiveness, and repenting, thus becoming guilty before God as a result. Note how Ein Yaakov comments on the one who quarrels with his master. (This could be a relevant concept in relation to not sanctifying the name per this week’s portion.)

The rabbinic concept here of “the one who quarrels with his master is considered as if he quarrel with the Shechina.” This teaches us that our hearts are not to be given to complaint. The multiple references to the Shechina reveals to us the presence of God is always amongst us, those who belong to Him and obey His commands. The concept here is the Lord God having given us His Word, we know what we should be doing, we know how we should respond, according to the Torah, to love our neighbor as ourselves (see Vayikra / Leviticus 19:9-18), and to help our enemies (In Parashat Mishpatim, What the Torah says is, when your enemy is in trouble, come to his assistance. That way, part of the hatred will be dissipated.) The Torah speaks of those who trust in themselves as opposed to those who trust in the Lord. The one’s who trust in the Lord will prosper, they will stand, they will raise up and be lifted up, etc. Again note what was going on in the deliverance of the people from Egypt (a costal region, low) and standing before God at Sinai and the Promised Land (an elevated position) as symbolic of the Lord drawing His people close to Himself and giving them His Words. The significant aspect of this week’s Torah portion coupled with the rabbinic commentaries is to sanctifying the Name of God in our lives. This means that we are to take God’s Word and ascend, to go up, to raise up to apply God’s Word to our lives. This is the definition of bearing God’s testimonies. This is the requirement of Torah that is relevant for all of God’s children, both Jew and Gentile. To trust in the Lord with all of our heart (to have Faith), and to live our lives for Him (to be Faithful) walking in the footsteps of the Messiah Yeshua.