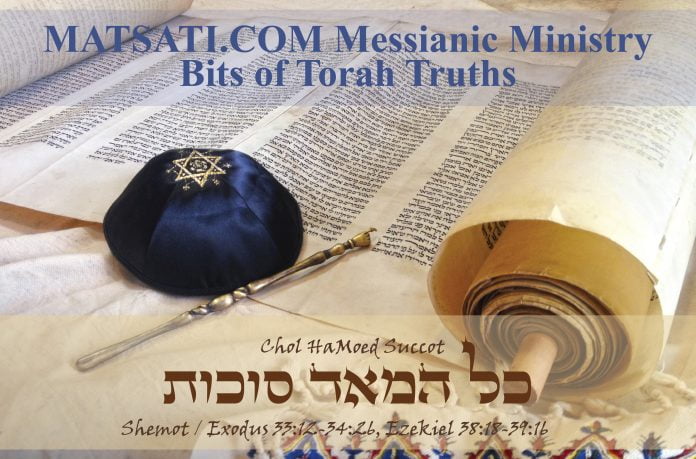 This week’s reading for Chol HaMo’ed Sukkot (Shemot / Exodus 33:12-34:26), is taken from the end of Parashat Ki Tisa.  In this section of Scripture, Moshe has asked the Lord God to forgive the sins of the Children of Israel for their sin with the golden calf.  While requesting for forgiveness, Moshe asks the Lord to reveal Himself and His glory.  The Lord commands Moshe to make two stone tablets like the previous ones and He will write on them the words that were on the previous set of Tablets.  Moshe demonstrates for us this week the importance of knowing God according to His ways in his statement saying, ‘Now therefore, I pray You, if I have found favor in Your sight, let me know Your ways that I may know You, so that I may find favor in Your sight. Consider too, that this nation is Your people.’ (NASB)  It appears that knowing the ways of God causes us to know our Father in heaven.  There is knowing the way God moves (operates) that describes His character, or who He is.  Based upon Moshe’s statement, having found favor in the Lord’s eyes, he desires to know the Lord in a more intimate way by knowing his ways.  How does knowing God’s ways bring us intimately closer to him?  Could this be explained by reason that man’s ways are sin, the Lord’s ways are righteous, sin causes separation, righteousness causes closeness?  If we walk in His ways He walks with us? (See the commentary on Tehillim / Psalms 49, Part 2)  The Scripture reading for this week reveals to us the order of obedience; we have found favor in God’s eyes because He loves us, and because of the Messiah Yeshua.  Now, we obey the Lord so that we can walk by faith, walk by the spirit in His favor, His love, and His blessing.  According to the Scriptures, we remember Succot because the Lord God took care of our fathers in the wilderness, and in like manner, He will also take care of our needs today in this present age.

Shemot / Exodus 34:10
34:10 And he said, “Behold, I am making a covenant. Before all your people I will do marvels, such as have not been created in all the earth or in any nation. And all the people among whom you are shall see the work of the Lord, for it is an awesome thing that I will do with you. (NASB)

In this week’s reading from Parashat Ki Tisa, we find Shemot / Exodus 34:10 where the Lord speaks to the children of Israel saying that He is making a covenant with the people, and that He will do great marvels, He will do such things that no one has seen before in all the earth.  The Lord is not just making a promise of the covenant, He is also telling Israel they are unique, and that He is going to do an awesome thing in their lives.  Isn’t that awesome if you consider that the Lord seeks to do the same in your life?  These Scriptures from the books of Moshe are very important and definitely have an application for our lives today.

Studying the Torah, it is possible to find a lot of prophetic meaning that describes the work and plan of our Father in Heaven and what He is revealing to His people, how He directs our attention to His Messiah in the sacrificial system.  For example, in Parashat Behukotai (Vayikra / Leviticus 26:3-27:34) the Lord speaks about doing something unique by establishing His covenant in a way that only He can do to walk in our midst so that He will be our God and we will be His people.  If we think about this, it is a very miraculous thing that is being described here, the Lord appears to be describing something about our relationship with Him that draws us back to the context of the Creation in Bereshit / Genesis 1-3, when the Lord walked in the garden and communed with Adam and Eve.  There is something about this miraculous change in our relationship with God that will reset our condition back to the initial state that was found in בגן עדן the Garden of Eden.  This begs the question, “What is the Lord planning on doing?” with a tone of an future expectation of the miraculous.

For many people though this is not the type of understanding that is taken while reading and studying the Torah.  For example, some scholars have stated that “virtually all of the major books written on Old Testament theology say very little about a messianic hope and when such books do speak of the messianic hope they do so in a very round about way touching at points but not explicitly.” (Brueggemann, W., Old Testament Theology in a Canonical Context By Brevard S. Childs Philadelphia, Fortress, 1985. 255 pp. Theology Today, 1986. 43[2], pp. 284-287).  Other authors suggest that “the Messiah is a later addition to the rabbinic literature as a result of the move away from the Temple service and focus more upon apocalyptic themes that are found following the destruction of the Temple in 70 CE.” (Neusner, J., Mishnah and Messiah. Biblical Theology Bulletin: A Journal of Bible and Theology, 1984. 14[1], pp. 3-11).  This idea is taken from the presupposition that the texts of the Tanach say very little about a messianic hope.  The important point is, there are factors that affect the issue of understanding the “Messianic hope” that is revealed to us in the Torah and also in the Prophets and Writings sections of the Tanach.  The methods that have been used by scholars to interpret the text of the Hebrew bible have a considerable impact upon one’s understanding.  For instance, the person who comes believing that Yeshua is the Messiah will find every other verse in the scriptures that support that presupposition.  On the other hand, those who reject Yeshua as God’s Messiah are able to find scriptures to back up their claims as well.  The attitude to the subject of the Messianic expectation in the Tanach reflects strongly on the personal presupposition that has been established in the mind of the expositor.  Every biblical scholar brings to their studies a defined theology that influences their perspective of Scripture.  With this in mind, every person who reads the bible is a “Bible interpreter” to a greater or lesser extent.  As Bible readers (interpreters) it is important to find the meaning and intent of the author (in the Hebrew texts) by studying the words, phrases, and sentences, of the original languages as well as within the larger context and the historical and cultural setting of when the Scriptures were written.  Our goal should be to discover the truth of the Scriptures outside of our own self imposed traditions and presuppositions (i.e. Greco-Roman philosophy).  What is it that the Lord God Almighty is trying to tell us in His Torah with the future expectation of doing the miraculous?

The key verses in the Torah that explain to us what the Lord God Almighty is seeking to do in our lives is found here in Parashat Ki Tisa and Vayikra / Leviticus 34:10.  This might be the reason why this portion of Scripture is used for the read for Succot.  The Lord has plans to do something miraculous that has never been seen before.  The Lord singles us out as His beloved people through whom He is going to perform these miracles.  The Lord says וַהֲקִימֹתִי אֶת-בְּרִיתִי אִתְּכֶם “I will establish/raise up my covenant with you,” today’s verse is a repetition of what He has promised before again and again (Bereshit / Genesis 6:18, 9:8-17, 17:7).  Following this statement the Lord says that He will make his dwelling among His people and walk among them saying וְהָיִיתִי לָכֶם לֵֽאלֹהִים וְאַתֶּם תִּהְיוּ־לִי לְעָֽם “and I will be their God and they will be my people.”  These scriptures are very significant for understanding all of the Torah, the Word of God, God’s plan of redemption, and His Messiah.  How will God establish His covenant in such a way that based on our verses (Vayikra / Leviticus 34:10) will be the miraculous?  What is He going to do to cause Himself to walk and dwell in our midst?