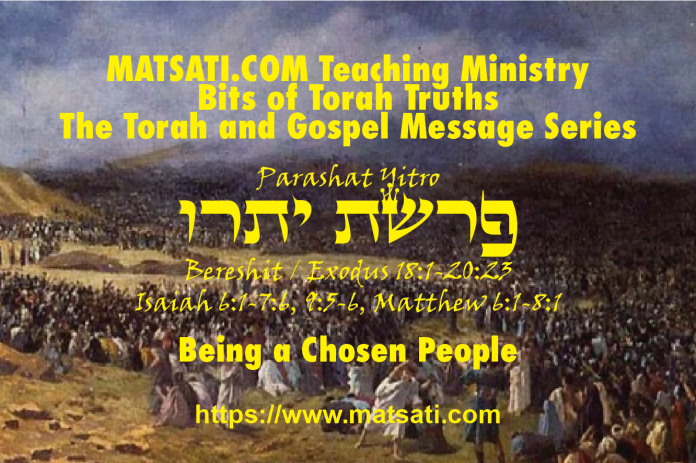 In this week’s Torah Portion (Parashat Yitro) Moshe’s father in law Yitro (Jethro) had heard in the land of Midean all the Lord had done for the children of Israel. When Yitro arrived in the wilderness, Moshe told him all that the Lord had done by delivering them from the Egyptians. As Yitro was visiting, he noted how Moshe sat to hear the problems of the people and then offered some advice what to do, to appoint judges to help him with the burden of governing the people. Rashi states the following concerning Yitro.

Rashi states Yitro became a proselyte, because he loved the divine precepts, and because he loved the Torah one more letter was added to his name. i.e. Jethro’s original name was Yeter (i.e., יֶתֶר, “remainder”) but was changed by God to Yitro (i.e., יִתְרו, “His abundance”). The extra Vav (ו) at the end of his name is an indication that the wise advice that was given by him was added in order to honor him. Following these events, we are told that Israel encamped opposite of Mount Sinai. Moshe then ascended the mountain to speak with God, and the Lord God gave him several commandments to instruct the people. The Lord told Moshe to tell the people, that if they obeyed His Word, and kept His covenant they would be a “kingdom of priests and a holy nation.” All of the people responded with “all the Lord has spoken, we will do.” Moshe then ascended the mountain and the Lord told him to instruct the people to consecrate themselves for three days because on the third day the Lord will descend (come down) on the Mountain of Sinai in the sight of all the people. The heavens and the earth trembled as the sound of the shofar flew, the mountain burned, and the voice of God boomed speaking to the people. It was at this time (Shemot / Exodus 20) the people asked Moshe to be their intermediary before God on their behalf.

In Midrash Rabbah on Shemot / Exodus, there is a story of the Lord God going to the nations to offer them His Torah prior to His having offered the Torah to Israel. The midrash states this was done so the nations could not claim they had not had the opportunity to accept God’s Instructions.

It is interesting how the rabbis reason these things; this midrash may have been developed to counter the claims of foreign peoples against the exclusive nature (the choosing of Israel) at the expense of the other nations. This is not exactly what it means to be chosen. To be a chosen people adds more responsibility to our lives, meaning we are called to live in righteousness and holiness for the glory of God. The promises of God include the blessing to the nations, so our lives are not simply lived for the Lord, but also for the welfare of the world! This is found in the command to love our neighbor. The chosen people are charged with the role to not only draw near to God, but also as priests, a holy nation, to be an ambassador for God to the nations. This is where the concept of performing the mitzvot is for tikkun olam, the repair of the world. The ultimate plan of God is for all the families of the earth to be blessed through drawing near (Parashat Lech Lecha, Bereshit / Genesis 12), because the chosen people of God are to be a light unto the nations. This draws in the concept of the seed of the woman into the redemptive story of the Scriptures. A chosen person today is not selected on the basis of genetics of lineage, but by a personal call from God. Paul spoke of this in Romans 9:6-8 saying, “through Isaac shall your offspring be named,” meaning that the children born of flesh is not how God chooses, but by the children of the promise, by faith. This speaks of the faithful remnant in Israel, and of those who would have faith from the nations. This is why the Apostle Peter referred to those who believe in Yeshua as “a chosen race, a royal priesthood, a holy nation, a people for his own possession” (1 Peter 2:9, Shemot / Exodus 19:6, Devarim / Deuteronomy 7:6) referencing both Jew and Gentile as a holy nation and people. All of those who believe in Yeshua are part in the priesthood of the Messiah Yeshua and have access directly to God our Father in heaven in the Name of Yeshua His Son. This is an important observation! The Scriptures describe God as being no respecter of persons. (Acts 10:34, Romans 2:11) He is able to make the unclean clean (Acts 10:28) and to make those who are called “Not My people” to be “My People.” (Hosea 2:23, Matthew 3:9) The Torah describes the need for a spiritual brit millah, circumcision inwardly. (Devarim / Deuteronomy 10:16, Romans 2:28-29, 1 Corinthians 7:19, Galatians 5:6, 6:15, Philippians 3:3, Colossians 2:11) Having a relationship with the Messiah is how righteousness is imputed, and not by birthright. Regardless of one’s ethnic background, gender, or social status in the world, those who believe and trust in Yeshua the Messiah are an “am segulah” (עַם סְגֻלָּה, a treasured people). Peter wrote this saying that we are being built up as a spiritual house(living stones), a holy priesthood, and because of these things, we are to offer spiritual sacrifices that are acceptable to God through His Son Yeshua the Messiah. (1 Peter 2:5)

Our Highest Calling is to be the Sons of God! פרשת...