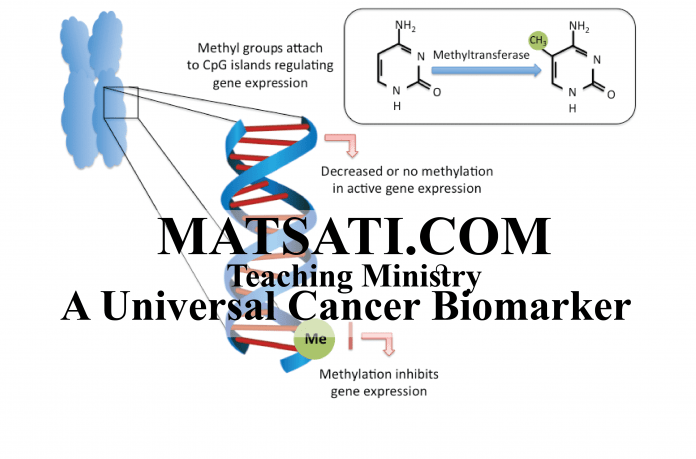 Recently there was a paper published in Nature communications titled, “Epigenetically reprogrammed methylation landscape drives the DNA self-assembly and serves as a universal cancer biomarker” (Nature Communicationsvolume 9, Article number: 4915 (2018)) that was very interesting reporting a biochemical phenomenon that allows for the detection of the early stages of cancer.  Researchers say this method of detection takes only 10 minutes to work for all types of cancers. The functional material that is used for the identification of cancer cells is gold nanoparticles.  One of the key causes of cancer is due to the formation of unhealthy or mutated DNA. See my previous discussion titled “A Second Layer of Information on top of our Genetic Code” for a short discussion on disease pathology and DNA.  For many years researchers have identified many types of cancer and learning how cancer is a complex and variable disease that is incredibly challenging to detect until it begins manifesting itself causing major biological problems.  This new technique has the capability of detecting cancer in its earliest stages being capable of discerning between healthy cells and cancerous cells.

DNA methylation is a process by which methyl groups are added to the DNA molecule. Methylation is used to change the activity of a DNA segment without changing the sequence. When this is located in a gene promoter, DNA methylation typically acts to repress gene transcription. DNA methylation is essential for normal body development and is associated with a number of key processes including genomic imprinting, X-chromosome inactivation, repression of transposable elements, aging, and carcinogenesis. In mammals, DNA methylation is almost exclusively found in CpG dinucleotides, where the cytosines on both strands tend to be methylated. Non-CpG methylation can however be observed in embryonic stem cells, [1-3] and has also been indicated in neural development. [4] Furthermore, non-CpG methylation has also been observed in hematopoietic progenitor cells, and occurs mainly in a CpApC sequence context. [5] Here is where the process may go wrong.  It has been observed in many disease pathways, such as cancer, the gene promoter CpG islands acquire abnormal “hypermethylation,” which results in transcriptional silencing that can be inherited by daughter cells following cell division. [6] Alterations of DNA methylation have been recognized as an important component of cancer progression and development.

The significance of this research is the signature way it is possible to distinguish a healthy cell from a diseased cell.  How this relates to a spiritual application, is to ask the question “What is that signature thing that distinguishes all of God’s children?” Considering Christianity, the dictionary definition is as follows:

The dictionary definition of a “Christian” is summarized to be “a person professing belief in Jesus as the Christ (Messiah) or in the religion based on the teachings of Jesus.” While this is a starting point, this definition falls woefully short of really communicating the biblical truth of what it means to be a child of God.  In our culture today, the word “Christian” does not adequately describe a child of God because of the level of biblical illiteracy that is extant today.  Many people today who do not believe in Yeshua (Jesus) call themselves Christians simply because they go to church or live in a Christian nation or consider themselves to be a good person.  Going to church does not make a person a christian any more than standing in a parking lot makes you an automobile. In the rabbinic literature, the rabbis teach us about the significance of the Word of God being placed in our hearts in their emphasizing not the Torah scroll itself but to the importance of its content (what is written) being placed upon the heart. Joshua stated, “This book of the Law shall not depart out of thy mouth, but thou shalt meditate therein day and night.” (Joshua 1:8) David said, “Thy Word have I hid in my heart, that I might not sin against Thee.” (Tehillim / Psalms 119:11) The duty of God’s children is to lay up God’s Word in the heart, to hide God’s Word in the heart, to receive the knowledge of God into the heart, to delight in it, and to put it into practice. This is a duty and a necessary practice for God’s children. This is why Yeshua said the commandment leads to eternal life. (John 12:50) The Word of God does not just function in an esoteric sense, but is powerful to change lives, and moves within us for salvation to the motivations for our actions as Paul wrote to the Colossians saying, “Let the Word of Christ dwell in you richly.” (Colossians 3:16) The Lord God said through the prophet Hosea, “I have written to him [Ephraim] the great things of My Law, but they were counted as a strange thing.” (Hosea 8:12) To be strangers to the Word of God, while yet having some familiarity is exactly what we see going on today in the mainstream Christianity and this is a great deception. To make peace with God is to believe in God’s son, and to carefully listen to the message of His Word and put it into practice. This starting point is crucial because it is a Torah centric principle.

An example we read in sefer Bereshit (the book of Genesis) in the Masoretic Text Bereshit / Genesis 34:1 tells us, א   וַתֵּצֵא דִינָה בַּת-לֵאָה אֲשֶׁר יָלְדָה לְיַעֲקֹב לִרְאוֹת בִּבְנוֹת הָאָרֶץ: 34:1 Now Dinah the daughter of Leah, whom she had borne to Jacob, went out to visit the daughters of the land. (NASB)  The Targum Pseudo Jonathan translates this verse to say, ונפקת דינה ברת לאה די ילידת ליעקב למיחמי בנימוס בנת עמי ארעא “And Dinah the daughter of Leah whom she bare to Jacob, went forth to see the manners of the daughters of the people of the land.”  What is interesting about this verse is that we are told Dinah had decided to leave her family and the community to go out to draw near to the daughters of the land of Canaan.  The rabbis say that she went out to “see the manners (בנימוס) of the daughters of the people of the land.”  Here the word בנימוס means “law, custom, or practice.”  This has a significant application under the idea that Leah’s daughter Dinah went out to see the customs of the people.  The rabbis say she went out to see their practice during menstruation (Syriac Peshitta Esth2:12, according to the Leiden critical edition).  The translation for this verse is significant if we take into consideration the rabbinic literature in the discussions on menstrual impurity and the surrounding nations.  Menstrual impurity is understood to symbolize immorality and idolatry according to the rabbis. The Aramaic Targum translating “the custom” of the daughters of the land, draws a parallel to Dinah going, leaving her community, and leaving the Torah perspective on ritual purity, the life of a child of God, and sexual relations.  In the Scriptures and according to the rabbis, sexual relations has been connected to the concepts of adultery, idolatry, and all of the various aspects of these things regarding sin and disobedience to the Lord God in heaven.  Is it surprising then why the evil one takes every stride to draw God’s people into these things? This one verse from Bereshit / Genesis 34 according to the Aramaic translation can quickly become rich with context all by the use of one word; Dinah went forth to see “the manner” (בנימוס) or “the custom” of the daughters of the people of the land.  Was Dinah in the act of seeking out sin in her desire to go forth and see the daughters of Canaan?  Did she ignorantly go out to see their ways thinking she was safe? Note how in doing so she was raped by Shechem.  There is also a parallel here to being spiritually raped by what we draw near or align ourselves to in our culture. Why do you think Dinah was interested in learning the customs of the daughters of the land?  Was it because of a familiarity due to drawing near or being close to the surrounding peoples?

This is a biblical description of unfaithfulness which has a very practical application today.  In the mainstream culture with the LGBT community forcing their beliefs and ungodly practices upon society, many of God’s children are bringing this kind of lifestyle and mentality into their homes through the television and programming, movies, and TV series which normalize this type of sinful behavior. The significance of these things goes even deeper as movies and TV series integrates witchcraft, occult, and satanic practices into the television programming. The point is, though the Scriptures say according to Titus 3:5 says, “He saved us, not because of righteous things we had done, but because of his mercy. He saved us through the washing of rebirth and renewal by the Holy Spirit” and Ephesians 2:8 tells us that it is “…by grace you have been saved, through faith—and this not from yourselves, it is the gift of God” and John 1:12 also tells us, “Yet to all who received him, to those who believed in his name, he gave the right to become children of God.” there is more to faith and salvation than just holding to a set of beliefs, that we are saved by grace / mercy.  If we consider the Scientific discovery on the methylation of DNA, these cells function correctly or function incorrectly based upon a proper or improper methylation process that parallels these spiritual things, the mutated DNA still gives the appearance and functionality of DNA but causes a serious problem in the body for a proper life.  This is paralleled to the one who brings these things from the world into his or her life assuming it is OK because they hold to an esoteric belief that Yeshua (Jesus) is the son of God who dies for their sins without actually putting his teachings on the Torah into practice. (Remember, morality, ethics, and love are Torah centric principles.) Though it is by God’s mercy we are saved, Faith and Faithfulness are tightly coupled.  This is where the Torah has its practical application and the meaning of being born new (John 3:3, John 3:7, 1 Peter 1:23) teaching us we have been transformed from the inside out having the desire to put our faith into practice. The mark of a true believer is having a love for others and obedience to God’s Word (1 John 2:4-10). So the idea of bringing the ways of the world into our lives and our homes through television, this is a very serious issue. Unfortunately today this is not considered an important issue. Just like the Scientific research shows mutated DNA functions similar to the healthy DNA but causes major biological consequences.  The ear-mark characteristic of a faithful believer is one who does not bring the ungodly ways of the world into his or her life.  This is a a very important principle that is not being taught today.  I think it should be!

Physicists have a Massive Problem as Higgs Boson Refuses to Misbehave...