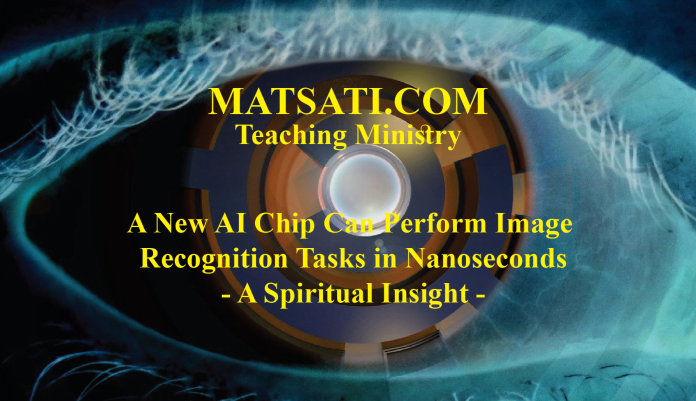 A new type of artificial eye has been developed [1] for the purpose of image processing. Machine learning technology has gone through leaps in technological advancement over the last decade. For image processing, a picture is captured using a frame based camera, it is converted into a digital format using a CCD (charge coupled device sensor), and then processed afterwards using a machine learning algorithm (MLA). This process leads to a large amount of data being passed between devices, sensors, and communication lines, and the end result is low frame rates and high power consumption. As a result, research has proceeded to develop visual data preprocessing techniques to increase the efficiency of the MLA analysis. In order to speed up the frame rates, researchers have developed an image sensor with artificial neural network (ANN) on the sensor such that the sensor can detect (collect image) and process optical images without latency. The device that was developed is a reconfigurable 2D semiconductor photodiode array, and the synaptic weights of the network are stored in a continuously tunable photoresponsivity matrix. The throughput as a result of the coupling of these technologies is reported to be 20 million bins per second. (Note: Statistical data binning is a way to group numbers of more or less continuous values into a smaller number of groups or “bins.”)

The significance of this research is related to the need for computer vision, such as in the application for driverless cars, automated driving, industrial robots, and smart sensors. This technology would allow for machines to respond very quickly to what they see. Image processing is typically very computationally intensive where the bottleneck is in the large amount of visual data that is captured, the mass of data slows the processing down. This sensor design mimics the way animals’ eyes preprocess visual information before passing it to the brain. The researchers manufactured a chip out of a sheet of tungsten diselenide that is only a few atoms thick and etched the material with light-sensing diodes. The light sensing diodes were then wired to form a neural network. The tungsten diselenide material provides unique electrical properties such that the photosensitivity of the diodes can be externally adjusted. The result is the neural network can be trained to classify visual information by adjusting the sensitivity of the diodes until providing the correct dataset. In this way, the smart chip can be trained to recognize stylized and pixelated versions of the letters n, v, and z. This technology is the next step in enabling AI hardware to become more efficient. The chip that was created contains only 27 diodes (sensors) and so its image resolution is limited. However, even though the resolution is limited, several standard supervised and unsupervised MLA tasks were achieved, including classifying and encoding letters. The research paper [1] claims scale up of the on chip neural network would be straight forward. Currently the weights of the ANN are stored in an external memory. For scaleup the weights would need to be stored locally on chip. Such a design could be enabled using a floating split-gate photodetector, once set the detector would remember its responsivity value and deliver a photocurrent of adjustable sign/magnitude. One of the advantages of this technology is the sensors can be trained off-line using computer simulations, and the predetermined photoresponsivity matrix then can be loaded onto the device.

The Spiritual Insights that we receive from this type of research is related to having vision. This is something that Paul spoke about when he wrote his epistle to the Corinthians a second time saying the following:

2 Corinthians 3:1-16
3:1 Are we beginning to commend ourselves again? Or do we need, as some, letters of commendation to you or from you? 3:2 You are our letter, written in our hearts, known and read by all men; 3:3 being manifested that you are a letter of Christ, cared for by us, written not with ink but with the Spirit of the living God, not on tablets of stone but on tablets of human hearts. 3:4 Such confidence we have through Christ toward God. 3:5 Not that we are adequate in ourselves to consider anything as coming from ourselves, but our adequacy is from God, 3:6 who also made us adequate as servants of a new covenant, not of the letter but of the Spirit; for the letter kills, but the Spirit gives life. 3:7 But if the ministry of death, in letters engraved on stones, came with glory, so that the sons of Israel could not look intently at the face of Moses because of the glory of his face, fading as it was, 3:8 how will the ministry of the Spirit fail to be even more with glory? 3:9 For if the ministry of condemnation has glory, much more does the ministry of righteousness abound in glory. 3:10 For indeed what had glory, in this case has no glory because of the glory that surpasses it. 3:11 For if that which fades away was with glory, much more that which remains is in glory. 3:12 Therefore having such a hope, we use great boldness in our speech, 3:13 and are not like Moses, who used to put a veil over his face so that the sons of Israel would not look intently at the end of what was fading away. 3:14 But their minds were hardened; for until this very day at the reading of the old covenant the same veil remains unlifted, because it is removed in Christ. 3:15 But to this day whenever Moses is read, a veil lies over their heart; 3:16 but whenever a person turns to the Lord, the veil is taken away. (NASB)

Here Paul opens with an allusion to Jeremiah 31:31-34 of God writing upon our hearts by His Spirit. This causes us to realize how we are not adequate in ourselves, we fail, we sin, and we need the Lord God Almighty to work in our lives, showing mercy to us, and making a new covenant with us. Paul speaks of the inadequacy of the letter of the Law which is weak and not able to save us by reason of the flesh. (Note, Paul is contrasting the sinfulness of the body to walking in the Spirit.) Paul points to the Spirit of God that we received which gives life! At this point Moshe then draws upon Shemot / Exodus 34:33-35 speaking of the glory of God, found in the letters engraved upon the stone tablets, and what was fading from the face of Moshe. Moshe placed a veil over his face to hide the glory of God that was fading, and Paul relates this to the hardness of heart, how the Torah, upon its reading, there remains a hardness, a veil, an inability to see, to read, and to understand the underlying message about the Messiah. Paul writes that this veil is lifted, it is removed in the Messiah (in Christ). Paul writes “whenever a person turns to the Lord, the veil is taken away.” Note how Paul said “when a person turns to the Lord…” This is important because Paul is saying this is when a person decides to seek the Lord according to the Scriptures, and not in his own way.  It is important to understand that the terms of the New Covenant involved the presence of God by His Spirit (the Holy Spirit) dwelling within His people. Paul wrote that the Spirit gives life! Paul makes a Midrash here on the events occurring at Sinai in the giving of the Ten Commandments. Paul’s does not argue for the abolishment of the Torah, its end, but of what is foretold of by the prophets, God’s Torah being written upon the heart, and of the giving of God’s Holy Spirit in our lives to help us to overcome the world. Paul is speaking of the Torah remaining active in a persons heart (being written) and this can only happen by faith in God’s Messiah!

Can Christians participate in worldly activities such as going to Bars?

The Spirit of Deception and Inability to Understand the Truth, ישעיהו...