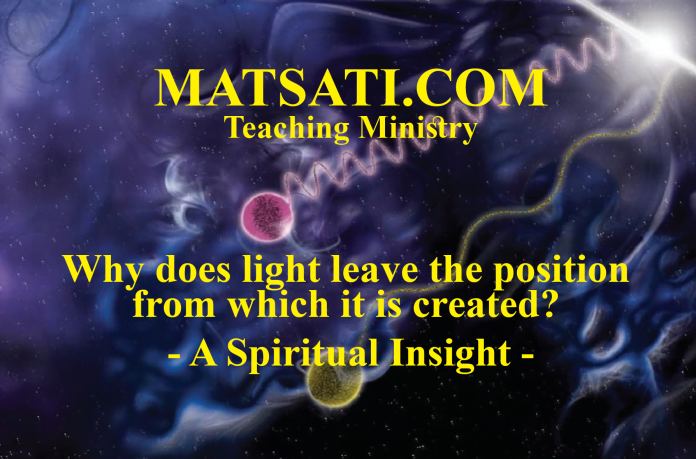 The question “what is light” is a very interesting question on many levels, both from a physical and the spiritual perspective. In the physical realm, light is a manifestation of the laws of electromagnetism, when sources of electric charge (electrons) are accelerated, the result is converted into waves of electromagnetic energy that travel outward from the source at the speed of light. Therefore, an accelerated electric charge causes ever moving waves of energy traveling at the speed of light, according to the laws of physics. What this says about light, being part of the electromagnetic spectrum, it is impossible for light to stand still because the laws of physics decree that it is always to be on the move!

The electromagnetic wave is a combination of an electric field and a magnetic field which are perpendicular to one another as shown in the image above. Visible light is not inherently much different from the other parts of the electromagnetic spectrum (radio waves to gamma rays) with the exception that the human eye is capable of detecting the wavelength of visible light (380-700 nm). Based upon studies in quantum theory, electromagnetic radiation can also be described in terms of a stream of photons which are massless particles each traveling with wavelike properties at the speed of light. A photon is the smallest quantity (quantum) of energy which can be transported and it was the realization that light traveled in discrete quanta that led to the origins of Quantum Theory and our understanding how electromagnetic energy interacts with matter (the physical world). It is no accident that humans can ‘see’ light. The detection of light is a very powerful tool for probing the universe around us, not just in outer space, but also in our day to day lives. As light interacts with matter it can be altered, this is how we are able to see different colors as the other colors are adsorbed. In addition to this, by studying light that has originated or interacted with matter, many of the properties of matter can be determined. It is through the study of light we are able to understand the composition of the stars light years away or watch the processes that occur in the living cell as they happen. All matter is composed of atoms and molecules, and it is light’s interaction with atoms which give rise to the various phenomena which help us to understand the type (nature) of matter. In Quantum physics, this is represented as energy on an energy level diagram (i.e. Jablonski diagram). What occurs is a photon impinges upon an atom or molecule, the energy from the photon is added to an electron raising it to a higher energy state (i.e. raises to an excited state). This is the meaning of matter being able to absorb light or different characteristic wavelengths. These characteristic wavelengths then may be used to ascertain the type of molecule that was affected. When the electron relaxes back down to its ground state, it releases photons which may then be measured. By studying the emitted light, one can determine the nature of the material (i.e. Raman Spectroscopy).

The Spiritual insight that we receive from light is in relation to light always being on the move, leaving the position from which it was created. What is interesting about this phenomena of light is how each one of us must experience the power and deliverance of God. We read about this relationship between man and God according to the Mishnah Pesachim 10:5:

Mishnah Pesachim 10:5
(5) Rabban Gamliel used to say: Whoever does not mentioned these three things on Passover does not discharge his duty, and these are they: the Passover-offering, unleavened bread, and bitter herbs. [The] Passover-offering [is offered] because the Omnipresent One passed over the houses of our ancestors in Egypt. Unleavened bread [is eaten] because our ancestors were redeemed from Egypt. [The] bitter herb is [eaten] because the Egyptians embittered the lives of our ancestors in Egypt. In every generation a person must regard himself as though he personally had gone out of Egypt, as it is said: “And you shall tell your son in that day, saying: ‘It is because of what the Lord did for me when I came forth out of Egypt.’” Therefore it is our duty to thank, praise, laud, glorify, exalt, honor, bless, extol, and adore Him Who performed all these miracles for our ancestors and us; He brought us forth from bondage into freedom, from sorrow into joy, from mourning into festivity, from darkness into great light, and from servitude into redemption. Therefore let us say before Him, Hallelujah!

The section from the Mishnah is speaking about the Passover festival. Within this festival, we read about the power of God to deliver His people performing awesome miracles for our ancestors and for each one of us. The rabbis say “He brought us forth from bondage into freedom, from sorrow into joy, from mourning into festivity, from darkness into great light, and from servitude into redemption. Therefore let us say before Him, Hallelujah!” Notice something here from the Mishnah that parallels our understanding of light “as being part of the electromagnetic spectrum is that it is impossible for light to stand still because the laws of physics decree that it is always to be on the move!” When we encounter God, He moves us from the place we are, he takes us from bondage into freedom, from sorrow into joy, from darkness into “great light.” Based upon this text, which is derived from the Torah, the Lord God causes movement in our lives similar to how we understand light, even in light’s interaction with matter. According to the Mishnah, every generation, each person is obligated to engage himself with the festival of Passover because of these things. We are to remember what the Lord has done, and speak and live as one who went forth from Egypt. This statement is based on what was said at the beginning of the Haggadah, “had God not taken our ancestors out of Egypt, we, and our children would still be enslaved;” that is, we must say, God took “us” out from there because we are included in all the miracles. Because of this, we are obligated to give thanks and praise God at this wonderful occasion. The sad part about the history of the church is today, a large majority of Christians do not feel a need to give thanks and praise unto God because of these things that are written in the Torah.

Another aspect of encountering God and movement (leaving the previous position or state) is in relation to our faith. Have we become static in our faith? What about loving and serving others? Have we become static in the sense that we are not moving in a forward direction to interact with others for the purpose of speaking of God’s truth (the Scriptures) and telling others about God’s Messiah Yeshua? One of the problems with “dogma” and “theology” is in the realm of fundamentalism, one has a certitude of truth and one can become static, rigid, or unmoving. The more we study God’s Word, the more we acknowledge the fact of our own ignorance, this is one of the primary moving forces in the field of science, one is always moving forward to learn, to understand, to study, to discern, to figure out how to manipulate matter for the betterment of mankind. (i.e. the applied sciences) As we study Torah and its inseparable connection to the Gospel Message, we are confronted with an emotional dilemma because of what we have been taught for thousands of years (Church theology and Church traditions). Within the framework of modern theologies, it is easy to see why one would feel the way one does regarding the Torah, the Gospel message, and the grace of God. The assumption was God’s grace was not present prior to Yeshua.  As we study God’s Word starting with the Torah we are quick to realize that God’s grace began with Adam and Eve, from the very beginning. Throughout the Torah and all of the Tanach we see the grace of God at work. When it comes to “science and religion” some say that religion, focusing as it does on the certitude of dogma, is fundamentally opposed to gaining any real new knowledge about the universe. In the sense of holding onto a particular dogma or theology, this does orient a person towards stagnation and stasis ( a state of being static in faith). Science, on the other hand is the process of learning and discovery and is orientated towards growth and change. What we find here in the Mishnah is when we encounter God and His Messiah Yeshua, we are oriented towards growth and change, freedom, and joy, being moved from darkness into the light! The NT Scriptures teaches us of these things and the importance of believing in the Messiah of God, taking his teachings and making them a part of our lives. We take what is written in the Scriptures by faith believing in what he (Yeshua) has done on our behalf by giving his life for ours. He performed one of the greatest mitzvahs in the Torah on our behalf, each and everyone one of us, to save a life! In these things we understand that wisdom and understanding come from God and we become worthy of them through the power of God by faith. This teaches us that all things come from God and that it is the Lord God Almighty who is the prime mover, he is the author, the creator, and the beginning of all things. The NT teaching on the Passover reveals to us that it is through the merit of this faith in the Messiah at this specific time that we are redeemed and we will be redeemed at a future time in the Olam Haba (World to Come). In addition to this, because of our faith in Yeshua the Messiah, we have an encounter with God by His Spirit dwelling in our lives. Because of these things, we are to always be moving forward. Just as light is always moving forward leaving the position from which it is created. We too must always be moving forward from the point of entry of the Messiah in our lives. If your faith is not moving you forward, or you have become static in your service to the Lord, then something is not right. This is a truth that may be observed from both a physical and spiritual reality, we are to be moving and proclaiming the good news of Yeshua the Messiah always! This is the nature of who we are as God’s people!

Listening to the Sound of the Trumpet, פרשת וישב, Parashat Vayeshev, Bits...