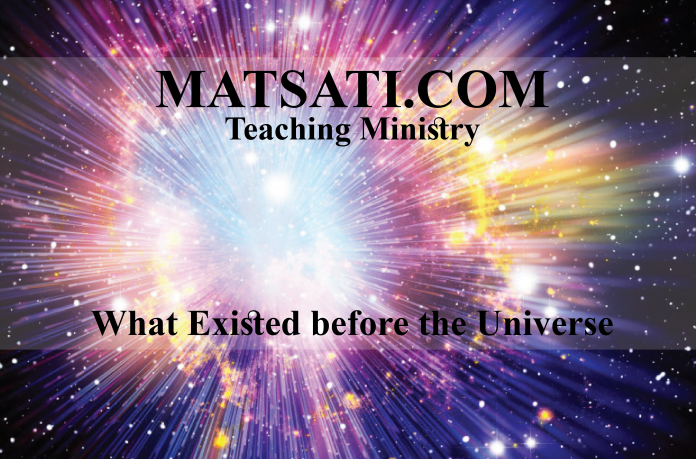 According to the Big Bang Theory, the universe is roughly 13.7 billion years old, and all of the matter in the cosmos existed in a form smaller than a subatomic particle. This is what is known as the universe having existed at this moment in time as a “singularity.” In physics and mathematics, a singularity is a point at which a function takes an infinite value, especially in space-time when matter is infinitely dense, as at the center of a black hole. Take for example the function f = 1/x for the limit as x → 0. The inverse function defines a singularity at zero where the function f(0) = infinity.

This function exhibits asymptotic behavior at x = zero illustrating the idea of a singularity. Note also in the case of a black hole, at its center is infinite density.  Because of this notion, the black hole is thought also of as being a singularity of infinite mass.  Now this is the basis for evolutionary theory and the result of modern cosmology which tries to understand the universe and our reason for being here outside of the notion that God exists.

The question of “what existed before the universe was created” is a question that predates modern cosmology by at least 1600 years. Saint Augustine, a theologian from the 4th century, asked the same question of what existed before God created the universe. His conclusion, based upon the word בראשית (Bereshit) “in the beginning” implies that God made nothing previously. Augustine argued that the world and time itself were both created by God simultaneously. In the 20th century, Albert Einstein also asked the same question and came to very similar conclusions in his theory of general relativity. In the theory of general relativity, Einstein considered how mass affects time. A planet’s mass would have the effect of warping time and space (at the extreme case black holes) making time run slightly slower for a man on the Earth’s surface as opposed to a satellite in orbit. We have actually run these tests and validated Einstein’s theory of general relativity of time dilation. The difference is too small to notice, but time does run more slowly for someone standing on earth as compared to in outer space (i.e. standing alone in a field [no masses nearby]).

The interesting insight that we receive from this discussion is in the sense that the Rabbis have also had such a discussion regarding “What existed before the Creation?”  The Scriptures describe God as having created the universe (the heavens and the earth, בָּרָא אֱלֹהִים אֵת הַשָּׁמַיִם וְאֵת הָאָרֶץ) and the Rabbis understand this to mean that God exists outside of time and space.  Going throughout the Scriptures in the Tanach (תנך, Torah – Neviim – Ketuvim) we find Scripture that states the following:

Micah 5:2
5:2 ‘But as for you, Bethlehem Ephrathah, Too little to be among the clans of Judah, From you One will go forth for Me to be ruler in Israel. His goings forth are from long ago, From the days of eternity.’ (NASB, ואתה בית לחם אפרתה צעיר להיות באלפי יהודה ממך לי יצא להיות מושל בישראל ומוצאתיו מקדם מימי עולם)

In Micah 5:2 the prophet describes one who goes froth on behalf of God whose going forth is ancient, as far as eternity.  Daniel speaks of a man who goes before the ancient of days (God) and is presented before Him.  These Scriptures cause the Rabbis to describe the preexistence of the Messiah before the Universe was created. In the Talmud and rabbinic commentaries, the rabbis describe seven things were fashioned before the creation of the world.  The last of which was the name of the Messiah.

The Talmud Nedarim 39, reports that seven things were created prior to the universe itself. They are: Torah, Teshuvah, the gan Eden, Gehinnom, G’ds throne, the holy Temple and the name of the Messiah. Scriptural proof is provided. Concerning the Torah it is written “The Lord made me at the beginning of His ways.” (Proverbs 8,22) Concerning Teshuvah, it is written “before mountains were born and the earth suffered birthpangs, You turn man to contrition and say “return, ye children of man!” (Psalms 90,3) Of the garden of Eden (Genesis 2,8) it is said: “and the Lord planted a garden in Eden heretofore.” Concerning Gehinnom it is written (Isaiah 30,33) “For Tophet in the valley of Hinnom has been prepared of old. He made it very deep; the pile thereof is fire and much wood; the breath of the Lord kindles it like a stream of brimstone.” Of the throne of G’d it is said: (Psalms 93,2) “Your throne is firmly established from time immemorial.” Of the holy Temple it is written in Jeremiah 17,22: “on high from the beginning, the place of Your sanctuary.” Of the name of the Messiah it states (Psalms 72,17) “His name continues since prior to the sun.”

Sefer Kuzari 3:73
The following is an instance: Seven things were created prior to the world: Paradise, the Tōrāh, the just, Israel, the throne of glory, Jerusalem, and the Messiah, the son of David.’

In Akeidat Yitzchak 101:1 Part 3 the Rabbis describe the Seven things that were created before the world was created. They are: The Torah, Repentance (Teshuvah), Gehinnom (Hell), the Garden of Eden (Paradise in Heaven), the Throne of Glory, the Temple, and the Name of the Messiah.  Note how the Torah and Repentance, the Lord God foreknew what was going to happen in the fall of man into disobedience (sin).  It is because of these things Midrash Rabbah Bereshit, Parashat 2, Part 4 speaks of these things and describes these things as being with God in the beginning. In the midrash, the rabbis Look at Bereshit / Genesis 1:1-2 and equate the word tohu (תֹהוּ) to Babylon, and uvohu (וָבֹהוּ) to Media and Haman.  The darkness (וחושך) represents Greece which darkened the eyes of Israel by forcing Israel to declare that they have no portion in the God of Israel.  The “waters of the deep” (פְּנֵי הַמָּיִם) represent sorrow due to the iniquity of the wicked who oppress Israel.  With all of these insurmountable obstacles, the Midrash references this second verse in the Torah because of the great power of God, and couples this moment to a messianic interpretation (expectation), that the spirit of the Lord hovering over the face of the waters, “this alludes to the spirit of Messiah.” (זה רוחו של מלך המשיח) and the Rabbinic text says specifically, “this is the spirit of the King Mashiach.”  The idea is the Lord God Himself will be involved in delivering His people in and through the Spirit of the Messiah.  Midrash Rabbah on Bereshit (Genesis) provides a significant amount of insight on the messianic nature of the King Messiah.  For example, the King Messiah is the One in whom the scepter (staff) will not depart from Judah (Bereshit / Genesis 49:10).  The rabbinic commentary states that this verse alludes to the Messiah Son of David (see also Midrash Rabbah Bereshit 97, 98 parashah 8, and 99 parashah 8).  Because of these things, latter Midrashim interpret the “King Messiah” as the Messiah Son of David, a deliverer who will come by the intervention of Lord God Almighty and by His Holy Spirit. Pesiḳta Rabba declares 161b describes how “God beheld the Messiah and his deeds before the Creation, but He hid him and his generation under His throne of glory.”

These things reveal to us why this question “What existed before the Universe?” is so important! It directs our attention to the God of Israel, and to His Messiah Yeshua.  The rabbis draw together various texts, Bereshit / Genesis, the Midrashim, Jewish tradition and interpretation, to describe the power of God being present in the Spirit of the Messiah.  These things teach us the Messiah will be God’s Savior and would be none other than the anointed one of God, the promised One who saves us from bondage and sin.  This was determined from before the foundation of the World!  According to the Apostolic Writings, Yeshua the Messiah is that deliverer, the anointed One of God who came to save mankind from sin and death.  The Scriptures describe the messianic concept of having faith in God to deliver His people looking to the past by what He has done, and expecting him to work powerfully in the present and future. What we are taught in the NT, the life and work of the Yeshua the Messiah is in full agreement with the Tanach (Torah – Neviim – Ketuvim) and the ancient rabbinic thought on the Savior King Messiah! And this existed before the universe existed!

Watch – Robo-fish is Powered by Blood-like Battery Fluid – A...