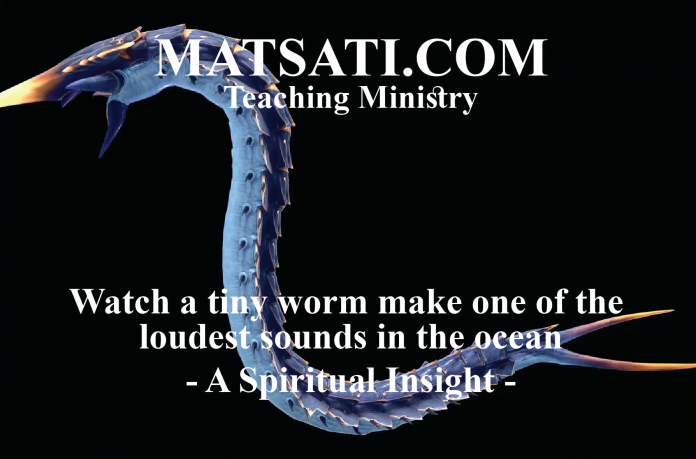 Researchers have reported aquatic animals making loud sounds underwater, such as mammals, fish, crustaceans, and insects. [1-6] A recent publication [7] reports on a soft bodied worm that is capable of producing a loud snap or pop, a very intense sound 157 dB, at 1 meter in the 1-100 kHz range. This species of worm is the Leocratides Kimuraorum worm found off the coast of Japan and is a sponge dwelling worm. The worms make a loud noise when they mouth-fight each other. Researchers suggest the worms use a muscle contraction method to make the loud noises. This allows for rapid expansion of the pharynx within the worm’s body during the strike which produces a loud popping sound via cavitation and a rapid influx of water. This is a similar way the snapping shrimp generate their sounds. [4] According to the published work [7] the worms and their underwater rumblings remain “an intriguing biomechanical puzzle that hints at a new type of extreme biology.” When the worms fight one another, they crawl towards each other, contract their bodies, and launch headfirst at their opponent. This is the first recorded instance of a soft bodied organism (mollusk) making a loud underwater noise like this.

The spiritual insights we receive from this is related to being outspoken about our faith. The reason this is an important topic is because today, more and more people feel that religion is irrelevant. We find a similar situation at the very end of Parashat Balak in Bamidbar / Numbers 25:1-9.

Here from the Torah, we read how Bilam taught the people of Midean how to cause Israel to sin. We read in Bamidbar / Numbers 25:6, it says 25:6 Then behold, one of the sons of Israel came and brought to his relatives a Midianite woman, in the sight of Moses and in the sight of all the congregation of the sons of Israel, while they were weeping at the doorway of the tent of meeting. (NASB) Notice how the people sat there weeping before the Tent of Meeting, and when this son of Israel brought the Midianite woman in the sight of all those who sat there weeping, nobody did anything besides Pinchas (פִּינְחָס), whose zealotry saved Israel from catastrophe. Remember under the advise of Bilam, the young Moabite women were used to seduce the Israelite men and this did not just occur at the outskirts of the camp, it reached all the way to the very heart of Israel, at the entrance of the Tabernacle illustrated in Bamidbar / Numbers 25:6. These Scriptures reveals to us the dangers of idolatry and sexual immorality.  This text also reveals the connection between fornication (זְנוּת) and avodah zarah (עבודה זרה). Because the people kept silent, they did not stand up for the word of the Lord, and then part of Israel was deceived and joined themselves with Baal Peor causing the anger of the Lord to burn against them (Bamidbar / Numbers 25:1-3). Moshe instructed the leaders involved to be put to death, and all of those who joined themselves to idol worship were also put to death. Note how they were able to find those who were involved in doing this.  This was because the people had remained silent until Moshe rose up and commanded the people as what to do.

The survival of the people was accomplished by Pinchas who was described as a zealot (קַנָּאִי, from the same word as “jealous” or “envy”) in the Torah (see Bamidbar / Numbers 25:11). Here Pinchas took the law into his own hands, and generally this is not something that we do because there should be due process for the guilty. It is clear however according to the Torah that his zeal was considered the righteous response to the situation. צְדָקָה תַּצִּיל מִמָּוֶת / tzedakah hatzil mi-mavet: “righteousness saves from death” (Mishley / Proverbs 10:2 and 11:4). The ulterior motive of the Moabites was to destroy the people of God by enticing them to worship the god of Moab, and this was as serious a matter as the sin of the Golden Calf. Pinchas recognized that fornication (connected to avodah zarah) would lead to the destruction of Israel. His courageous and righteous action was therefore justified and the LORD honored him with a brit kehunat olam (בְּרִית כְּהֻנַּת עוֹלָם), a “covenant of a perpetual priesthood” (see Bamidbar / Numbers 25:11-13). Because he risked his life for the sake of the truth, God established his appointment as a priest in Israel with special standing. The Lord did not however choose him to succeed Moshe, even though he was zealous for the Lord. The LORD said to Moses, “Take Joshua the son of Nun (יְהוֹשֻׁעַ בִּן־נוּן), a man in whom is the Spirit (אִישׁ אֲשֶׁר־רוּחַ בּו), and lay your hand on him.”  Note how the practice of semichah [סְמִיכָה], “ordination, or laying on of hands,” was used for the purposes of sacrifice (head of the animal) as well as for the transfer of Moshe’s authority to Joshua. The concept of the laying on of hands, from sefer Vayikra (book of Leviticus) and the sacrifices, is a picture of “sacrificial leadership.” The point is the Lord God has a plan for our lives, and our zealousness for the Lord will not change that, meaning it will not force God’s hand or timing. This point is demonstrated through the life of Pinchas, the Torah describes how Pinchas was full of zeal for the Lord who saved Israel from destruction. He was honored with an eternal covenant of peace. He is known as a great hero of Israel where this Torah portion is even named after him. The Jewish commentary Ein Yaakov is a collection of all the agaddah (the non-legal) material of the Talmud, compiled by Rabbi Yaakov ibn Chaviv, a fifteenth century talmudist.  According to a midrash cited by Rabbi Yaakov ibn Chaviv, several of the sages of the Mishnah (the Tannaim) attempted to choose the central verse that summarized the meaning of the entire Torah.

In order to understand why Pinchas was not chosen, the rabbis discuss the most important verse from the Torah, and they immediately recognized the significance of the Lord commanding Moshe on the Korban Tamid (Bamidbar / Numbers 27:22-23, 28:1-4). There is a connection here to the continual sacrifice, the selection of Joshua, and the one who would lead Israel. The Torah centers upon the idea of sacrifice, that is summed up in the Olat Tamid, the Lamb of God. According to this midrash, the Olat Tamid is more important than the Shema, or even the duty to love others. This Lamb of God that is contained within the Olat Tamid offering is central to the meaning of the Torah. The idea of the lamb of God opening and closing the offerings, draws in the idea of all inclusiveness, all of the sacrifices are included in this process, that is coupled to the one whom God chooses to lead his people. There is an important lesson here for us found in the study of these things within the context of the scientific research. We are called to not just be a people who are called to live according to God’s Torah, we are also called to be a people who stand for truth, justice, and life according to God’s Word and we are supposed to be salt in this world, seasoning the nations, and be vocal about the truths that we learn from God’s Torah and His Messiah Yeshua.

The Torah, Bondage, the Reality of Demons, Unclean Appetites, and...