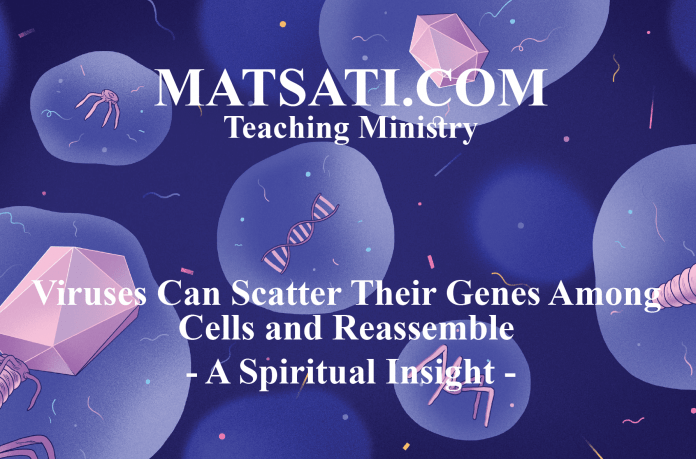 Virology is a branch of science that deals with the study of viruses, submicroscopic, parasitic particles of genetic material contained in a protein coat – and virus-like agents. It focuses on the following aspects of viruses: their structure, classification and evolution, their ways to infect and exploit host cells for reproduction, their interaction with host organism physiology and immunity, the diseases they cause, the techniques to isolate and culture them, and their use in research and therapy. Virology is considered to be a sub-field of microbiology or of medicine. A classical tenet of virology is that viruses fully infect individual cells and replicate within them. But recent work [1] shows that some viruses instead scatter their genes among many cells. The cells then make new complete viruses by sharing the products of the genes.

Some viruses are divided into multiple segments that infect a host cell separately. Researchers studied how fractured viruses can grow with their genomes scattered across a multitude of host cells. It is postulated the diffusion of molecules among the infected cells enables the mechanism for the viral particles to replicate, self assemble, and continue infecting. This study revealed the segments infect cells independently and accumulate independently in the plant host cells. Researchers state, “It really shows that the virus doesn’t work at a single-cell level, but at a multicellular level.” The idea of a multipartite virus have been known for over 50 years and some of the questions scientists have are “what are the advantages to having segments that are packaged differently?” Molecular modeling of these types of systems, a study from 2012 [2] concluded that the disadvantages are so great, that a virus with more than four segments should be impossible. Yet, multipartite viruses like the faba bean necrotic stunt virus (FBNSV) are known to have as many as eight segments each carried in a different particle. Theoretically this is impossible, so something must be conceptually wrong regarding this viral mechanism. Researchers tested the FBNSV infection by tagging two viral segments at a time with different colored fluorescent probes, and the team could see the viral segments and which segment was absent from the majority of the individual host plant cells they examined. What they discovered a protein required for viral replication was present in cells that did not have the genome segment coding for it. This inferred that the virus particles are sharing gene products as messenger RNA molecules or proteins so that each particle could replicate and package itself into a capsule to spread. The mechanism for how these components are shared is not well understood.

Proof of the strength of this multipartite virus strategy can be found in the influenza virus. The flu genome also has eight segments, although those segments are packaged together in one viral capsule. This allows the flu virus to reap the benefits of segmentation without paying all the costs of multi-partition. The flu virus may be more similar to the FBNSV than first meets the eye. Researchers have discovered that, depending on the strain, only a tiny fraction (1-10 percent) of flu virus particles contain functional copies of all eight genome segments. “The vast majority of flu particles are these incomplete, or what we call semi-infectious, particles that are incapable on their own of initiating productive replication.” researchers explained. This kind of explains why the flu virus is so successful and highly transmissible, because it is largely existing as these particles that cannot replicate on their own.

The Spiritual insights that we receive from this idea of partitioning of dna and the infection pathway which was designed to cause the host cell to not be able to recognize it is being infected. In Paul’s words to Timothy, he writes according to 1 Timothy 4:1 But the Spirit explicitly says that in later times some will fall away from the faith, paying attention to deceitful spirits and doctrines of demons. (NASB) Paul writes that the Spirit clearly, expressly, explicitly (בְּפֵרוּשׁ) says, in the later days some will change direction (יִסְטוּ) or stray (יָסוּרוּ) or deviate from the moral path (יִתְעוּ) from the faith (הָאֱמוּנָה).

The faith that is spoken of here is that the mercy of God is meant to lead us to repentance and the knowledge of the truth. (Titus 2:11-12) Our faith is not meant to be a license to seek our own way and cast off restraint, it actually is the opposite, to hold fast to God’s word in both thought and action. Paul goes on to say these men fall away to the instructions (וּלְתוֹרוֹת) of demons (שֵׁדִים). Deceitful spirits lie in wait in order to deflect God’s people from the path of God. Yeshua said on the Mount of Olives according to Matthew 24 that deception would be the primary cultural sign of the last days. Even some of God’s “elect” might be deceived by false doctrines and theologies. He says in those days, “Good would be called evil and evil good” (Isaiah 5:20). Men would substitute light for darkness and darkness for light calling their sinful deeds “of God” (or created by God or righteous). There is much deception in this world today. The deceitful spirits who lie in wait aim to deflect God’s people from the right path (from God’s Ways) taking us away from seeking the Lord God Almighty according to His Word. Their instructions are deceptive, manipulative, seductive, and alluring. Demons lure people from a position of stability into a place of instability in an attempt to capture them. In Israel’s history, we read one of the oldest forms of idolatry practiced by the ancient peoples was that of looking to the stars. Astrology is the belief that the positions of the stars and planets somehow shape our personality and even influence the events of our lives and hold them in written form to determine our destiny. Every newspaper has a “horoscope” section which is divided into 12 sections representing the 12 different signs of the zodiac. What the God of Israel says about astrology may be found in Devarim / Deuteronomy 4:19, יט וּפֶן-תִּשָּׂא עֵינֶיךָ הַשָּׁמַיְמָה וְרָאִיתָ אֶת-הַשֶּׁמֶשׁ וְאֶת-הַיָּרֵחַ וְאֶת-הַכּוֹכָבִים כֹּל צְבָא הַשָּׁמַיִם וְנִדַּחְתָּ וְהִשְׁתַּחֲוִיתָ לָהֶם וַעֲבַדְתָּם אֲשֶׁר חָלַק יְהוָֹה אֱלֹהֶיךָ אֹתָם לְכֹל הָעַמִּים תַּחַת כָּל-הַשָּׁמָיִם: 4:19 ‘And beware not to lift up your eyes to heaven and see the sun and the moon and the stars, all the host of heaven, and be drawn away and worship them and serve them, those which the Lord your God has allotted to all the peoples under the whole heaven. (NASB) The religion of the Egyptians was known to have consisted preeminently of sun worship. Moshe sternly warned the Israelites against worshiping the sun, the moon, and the stars, and all of the host of heaven according to Devarim / Deuteronomy 4:19. The prohibition against making and worshiping an image that is in heaven above (Shemot / Exodus 20:4, Devarim / Deuteronomy 5:8) implies also the celestial bodies, the stars. The Israelites fell into this kind of idolatry, and as early as the time of Amos they had the images of Siccuth and Chiun, “the stars of their god” (Amos 5:26).

The kingdom of Israel fell prior to that of Judah (2 Kings 18:16), one of the causes was that of worshiping the host of heaven. The kingdom of Judah later did the same, and Manassah built altars to all the host of heaven in two courts of the house of the Lord. It was the practice of the people to appoint priests who offered sacrifices to the sun, the moon, the planets, and all the hose of heaven. We read that altars were built on the roofs of houses and horses and chariots were dedicated to the worship of the sun. (2 Kings 21:5, 23:4-12) Looking to the stars, this form of worship or divination continued in Judah up until the eighteenth year of Josiah’s reign (621 BCE). It was at this point the king took measures to abolish all kinds of idolatry. Even though the public worship of these things were abolished, privately individuals continued to worship the heavenly bodies and poured out libations to them on the roof of their homes. (See Zephaniah 1:5, Jeremiah 8:2 and 19:13) The reason this is so was most likely because the people considered these things harmless, just as people today look to astrology in their daily newspaper.  Jeremiah describes these things as the worship of the queen of heaven. Ezekiel describes these things (591 BCE) the worship of the sun as practiced in the court of the Temple (Ezekiel 8:16) and in Jeremiah 44:17-19 even after the destruction of the Temple the women insisted on continuing to worship the queen of heaven. In the Torah, we also read Terah, Abraham’s father from Ur of the Caldees, was an idol maker, and Haran (see Bereshit / Genesis 9:31) and settled in a city known from the Assyrians for moon worship. According to the Scriptures, the Lord God of Israel called Abraham out from his family tradition of idolatry. In Arabia, the nomadic peoples worshiped the moon god, and the Babylonians worshiped the Sun. In the Talmud and in post-Talmudic literature there is a lot that is said about Avodah Zarah (Idol Worship). In connection to the stars, it is said in the Mishnah Avodah Zarah 4:7 that the Zekenim (or Council of Elders, the rabbis) were asked if God dislikes idolatry why He did not destroy the idols. The Rabbis answered, “If the heathen worshiped only idols perhaps God would have destroyed the objects of their adoration, but they worship also the sun, the moon, the stars, and all the host of heaven, and God can not destroy the world on account of the heathen.”

Watch Dr. Duane D. Miller PhD Discuss the Universe’s Earliest State of Matter Was Like an Ocean of Perfect Liquid – A Spiritual Insight

Parashat Vayetze: Yeshua is our ladder to Heaven

The concept of repentance, forgiveness, and the Messiah.