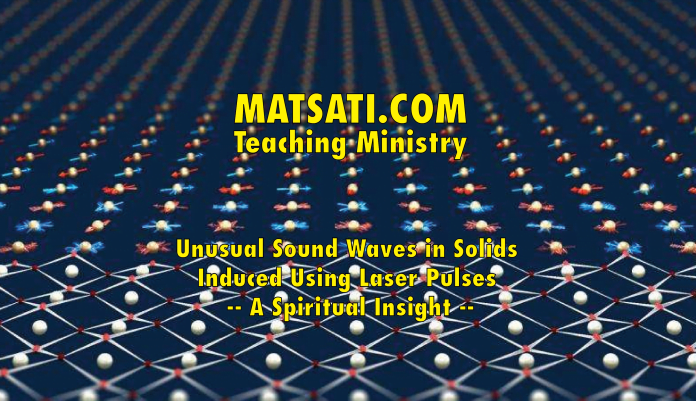 Alexander Bell invented the photophone and considered this “the greatest invention he had ever made, greater than the telephone.” Although the photophone was not commercially viable, it did demonstrate that one could use light to transmit sound. This invention is therefore considered to be the forerunner of fibre optics and wireless communications. Physicists today working with ultrashort pulses of laser light have been successful in initiating unusual sound waves in nanodevices. [1] This work is designed to help engineers achieve higher precision control of heat flow and sound using light.  In 1880, Alexander Graham Bell, theorized that light could be converted into sound waves in certain materials. It has been 140 years since his theoretical proposition, and this effect has been proven by scientists. This effect is generating a lot of interest because it can be used to control the flow of heat and sound on a nanometer (1 E-9 meter) scale which enables engineers to make novel functionality in very small devices.

The material they achieved this phenomenon of light to sound was in a VTe2 material (Vanadium Tellurium). VTe2 is trigonal omega structured and crystallizes in the trigonal P-3m1 space group. The structure is two-dimensional and consists of one VTe2 sheet oriented in the (001) direction. V4+ is bonded to six Tellurium atoms. Sound waves in a material are capable of compressing and expanding the material along the direction of travel.  These types of waves are known as longitudinal waves.  Other waves are transverse and cause the atoms or molecules of the material to oscillate perpendicular to their direction of travel.  In previous experiments, the light was used to induce sound waves in nanomaterials, the light heated the material causing it to expand in all directions creating longitudinal sound waves. In this research, the scientists were able to create transverse sound waves by using a very thin layer of VTe2. Ytterbium-doped Potassium Yttrium Tungstate (Yb:KY(WO4)2) single crystals are the laser crystals used for diode or laser pumped solid-state lasers. The researchers used this solid-state laser as a photon source to probe this phenomenon. The generated laser beam was split into pump and probe beams. A fundamental 1030 nm pump beam with a pulse duration of 290 fs passed through a delay line and was used to excite the sample. These short laser pulses induced a structural instability altering the crystal structure of the material and producing a transverse sound wave. They were able to detect this change in structure using ultrafast electron microscope imaging and electron diffraction measurements.  This sound wave phenomenon was observable by the intensities of the diffracted electrons temporally oscillating due to a change in the diffraction (Bragg) condition which indicate the acoustic phonons propagating laterally along the VTe2 sheet. The transient diffraction intensities with longer time scales demonstrate the subsequent acoustic phonon dynamics behavior.

The researchers imaged these waves in the VTe2 which was 75 nanometers thick and the time resolution was on the order of 1 picosecond (1 E-12 second). This microscope allowed the researchers to make videos of the sound waves. The ultrafast electron microscope allowed the researchers to quantitatively measure the amplitude of the acoustic waves by electron diffraction. This electron diffraction technique is analogous to x-ray diffraction which shows the structural information, atom movements, and consequently the sound wave propagation phenomenon.

The Spiritual insights that we receive from this type of research is related to the laser pulses creating a structural instability, altering the crystal structure of the material and producing the transverse sound waves in the material. This is analogous to the Messiah who has made us to be a peculiar people and Moshe, Paul, and Peter spoke of this in the following way:

2:14 who gave Himself for us to redeem us from every lawless deed, and to purify for Himself a people for His own possession, zealous for good deeds. (NASB)

2:9 But you are a chosen race, a royal priesthood, a holy nation, a people for God’s own possession, so that you may proclaim the excellencies of Him who has called you out of darkness into His marvelous light; (NASB)

In each of these scriptures, these men are speaking of this phenomenon of the Lord God working in the lives of His people to become something they were not previously. This is an induced phenomenon that Paul writes to Titus saying the Lord who purifies us makes us zealous for good deeds. This is why the Lord told Moshe to tell the people that if they obeyed His Word, and kept His covenant they would be a “kingdom of priests and a holy nation.” Paul connects this to the Messiah in Titus to the Mercy of God who redeemed us and purified us to be his own possession. Peter repeats the words from the Torah that we are chosen to proclaim the excellencies of God as his holy people, a royal priesthood and holy nation. Studying the rabbinic literature, the rabbis describe the mercy of God according to Midrash Rabbah on Shemot / Exodus, with a story about the giving of the Torah to the nations, the Lord God offered His ways and His instruction to all of the nations of the earth prior to His having offered the Torah to Israel. The midrash states this was done so the nations could not claim they had not had the opportunity to accept God’s Instructions.

It is interesting how the rabbis reason these things; this midrash may have been developed to counter the claims of foreign peoples against the exclusive nature (the choosing of Israel) at the expense of the other nations. This is not exactly what it means to be chosen. To be a chosen person adds more responsibility to our lives, meaning we are called to live in righteousness and holiness for the glory of God. The promises of God include the blessing to the nations, so our lives are not simply lived for the Lord, but also for the welfare of the world! This is found in the command to love our neighbor. The chosen people are charged with the role to not only draw near to God, but also as priests, which requires a special sanctification of our lives unto God. We are a holy nation such that we are ambassadors for God to the nations. All of those who believe in Yeshua are part of the priesthood of the Messiah Yeshua and have access directly to God our Father in heaven in the Name of Yeshua His Son. The scientific research tends to draw out this very important observation! The Scriptures describe God as being no respecter of persons. (Acts 10:34, Romans 2:11) He is able to make the unclean clean (Acts 10:28) and to make those who are called “Not My people” to be “My People.” (Hosea 2:23, Matthew 3:9) This again is what the scientific research is drawing out for us in the sense of the laser pulses creating a structural instability, altering the crystal structure of the material and producing the transverse sound waves in the material. This is what the Lord is doing in our lives if we allow Him to do so! The Torah describes the need for a spiritual brit millah, this is the circumcision that is inwardly something God does in us! (Devarim / Deuteronomy 10:16, Romans 2:28-29, 1 Corinthians 7:19, Galatians 5:6, 6:15, Philippians 3:3, Colossians 2:11) We could analogize this spiritual brit millah to the structural instability that God is putting inside of us for the purpose of our having a relationship with the God of Israel in the Messiah by faith. Paul writes in his epistles that this is how righteousness is imputed, and not by birthright. (i.e. which is paralleled to the ground state of the material as opposed to the excited state induced by the laser pulses.) Regardless of one’s ethnic background, gender, or social status in the world, those who believe and trust in Yeshua the Messiah are called an “am segulah” (עַם סְגֻלָּה, a treasured people). Peter wrote this saying that we are being built up as a spiritual house (as living stones), a holy priesthood, and because of these things, we are to offer spiritual sacrifices that are acceptable to God through His Son Yeshua the Messiah. (1 Peter 2:5) To understand this in the greater context, consider that over 40% of the Torah’s written commandments focus on the laws of sacrifice to be performed at the Temple, and many other laws governing various social, ethical, moral, and interpersonal relationships and the commands to establish a system of justice so that the land is governed by the rule of law through courts, such that lawlessness does not overtake the land. Notice how important the Torah is for our lives! These things illustrate what exactly those spiritual sacrifices are that Peter is speaking of, which are those things related to righteousness, holiness, justice, and truth.

Watch – Dark energy, why the universe is expanding at an...

Monstrous ‘Blobs’ near the Earth’s Core – A Spiritual Insight