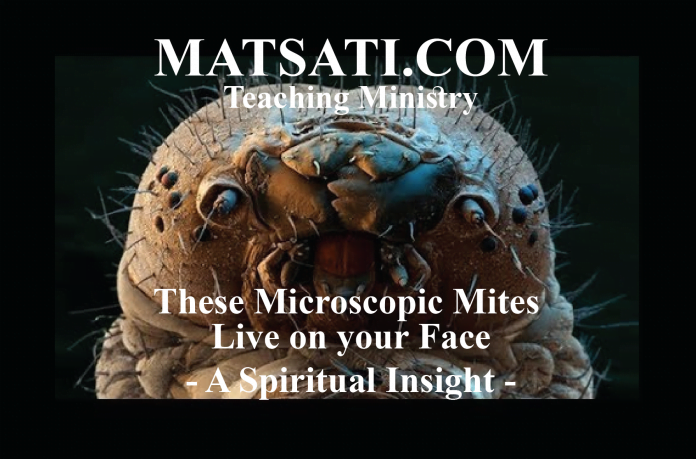 Demodex folliculorum is a microscopic mite that can only survive on the skin of humans. Most people have D. folliculorum on their skin. Usually, the mites do not cause any harm, and are therefore considered an example of commensalism (an association between two organisms in which one benefits and the other derives neither benefit nor harm) rather than parasitism. If D. folliculorum does cause disease, this is known as demodicosis. These Demodex or eyelash mites, just about every adult human alive has a population living on them. The mites are transparent and are too small to see with the naked eye at about 0.3 millimeters long, it would take about five adult face mites laid end to end to stretch across the head of a pin. Demodex face mites got their name from the Greek words for “fat” and “boring worm,” but they are not really worms. They are classified as arachnids and related to ticks and, more distantly, to spiders. Researchers are studying the DNA of these demodex mites and have discovered that people from different parts of the world have different face mites. The researchers say these differences tell a story of the ancestry and migration of a population. Our skin is mostly covered by a thin layer of peach-fuzz called vellus hair. Each of these hairs have their own follicle and the face mites (Demodex folliculorum and Demodex brevis) spend their days face-down inside the hair follicle, nestled up against the hair shaft, hidden from sight. They eat sebum, the greasy oil the skin makes for protection and keep from drying out. The sebum is produced in sebaceous glands, which empty into the hair follicles and coat both the hair shaft and face mite. As a result, the greasiest parts of your body, such as around the eyes, nose and mouth, likely harbor a higher concentration of mites than other areas. The mites live for about two weeks. They spend most of their time tucked inside the pores, but while people sleep, they crawl out onto the skin’s surface to mate and then head back to lay their eggs.

The Spiritual insights we receive from this type of research is to this symbiotic relationship that is at work here between the mite and the skin. In this world, we are in a sort of symbiotic relationship with the animal world. The deciding factor however is we have God’s protection. If that protection is removed, we receive an invasion of species and are able to discern that the Lord God is trying to tell us something. An example may be taken from Parashat Va’era (Shemot / Exodus 8:17, יז כִּי אִם-אֵינְךָ מְשַׁלֵּחַ אֶת-עַמִּי הִנְנִי מַשְׁלִיחַ בְּךָ וּבַעֲבָדֶיךָ וּבְעַמְּךָ וּבְבָתֶּיךָ אֶת-הֶעָרֹב וּמָלְאוּ בָּתֵּי מִצְרַיִם אֶת-הֶעָרֹב וְגַם הָאֲדָמָה אֲשֶׁר-הֵם עָלֶיהָ:, 8:17 For if you do not let My people go, I will let loose swarms of insects against you and your courtiers and your people and your houses; the houses of the Egyptians, and the very ground they stand on, shall be filled with swarms of insects.). The particular part of the text we are interested in is the phrase, הִנְנִי מַשְׁלִיחַ בְּךָ וּבַעֲבָדֶיךָ וּבְעַמְּךָ וּבְבָתֶּיךָ אֶת-הֶעָרֹב “I will unleash against you … wild beasts.” The way this is introduced is uncommon, you don’t find this written in this way in any of the other plagues. (Rabbeinu Bahya, Shemot / Exodus 8:17 Part 1-2) These wild beasts were not newly formed creatures, they already existed. The point of this statement is that God is doing something new, He is causing these wild animals to invade the habitat of man which is uncharacteristic since the animals have the fear of man in their hearts. There are similar things mentioned in the Torah, from Vayikra / Leviticus 26:22, the Torah writes in that context והשלחתי בכם את-חית השדה ושכלה אתכם, “I will dispatch/send against you the wild beasts of the field and they will leave you bereft of your children.” Note in the plague of frogs Moshe wrote “all your territory with frogs,” suggesting something similar, the frogs were not a new creation but simply emerged from their habitat in Nile river. Note Rashi’s commentary and what he says:

Rashi on Shemot / Exodus 8:17 Part 1
משליח בך means I WILL INCITE AGAINST THEE. Another example is. (Deuteronomy 32:24) “I will incite (אשלח) the tooth of beasts against them”, where it signifies letting loose an animal against a person; old French inciter. English to incite.

This idea of the Lord sending / dispatching / inciting, these animals was due to the sins of the people of Egypt, or the people of Israel (depending upon the context). Another example is given from Parashat Chukat when the people complain against God and Moshe, the Lord sends הַנְּחָשִׁים הַשְּׂרָפִים ha’nakhashim ha’seraphim “the snakes which are seraphim.” Bamidbar / Bumbers 21:6, ו וַיְשַׁלַּח יְהוָֹה בָּעָם אֵת הַנְּחָשִׁים הַשְּׂרָפִים וַיְנַשְּׁכוּ אֶת-הָעָם וַיָּמָת עַם-רָב מִיִּשְֹרָאֵל: 21:6 The Lord sent fiery serpents among the people and they bit the people, so that many people of Israel died. (NASB) According to Midrash Rabbah on Shemot Parashat 9 Part 9 the difference between G’d striking man and man striking his fellow man is that when man attacks someone he is anxious to do so suddenly so as to preserve the advantage of surprise. Not so God. God gives fair warning to enable man to fall in with His wishes before he is taught a painful lesson. Here the Lord God warned Pharaoh in seven out of ten plagues to give him opportunity to repent and escape the coming plagues. Job writes it in this way, saying according to Job 36,11-12, “if they serve obediently they will spend their days in happiness, their years in delight; but if they are not obedient, they shall perish by the sword.” Obedience is connected to faithfulness to God, His Word, and His Anointed One. This is also connected to the example given to us in the Torah, the people tested God ten times previously (Bamidbar / Numbers 14:20-23). In the example from Parashat Chukat, the desert place, the dry and dusty place, is the habitat of the snake based upon the curse upon the animal from Bereshit / Genesis 3:14 “dust you shall eat all the days of your life!” In the desert, the Lord God had protected the people from being bitten until this point. But because of their sin, “their protection” has been removed from them. Their protection has been removed due to their despising God in their hearts. Therefore, this situation of despising God and others (Moshe) led to the snake attach for a particular purpose. (i.e. Snakes symbolize slander ever since the time Eve was tricked by a snake into eating from the tree of knowledge, see Talmud Bavli Taanit 8) The reason the Torah does not write that “God sent snakes against the people” but writes הַנְּחָשִׁים הַשְּׂרָפִים ha’nakhashim ha’seraphim “the snakes which are seraphim” underlies the point of this punishment just as we read in Shemot / Exodus 8:17. Here the people were unfaithful to God by despising Him in their hearts. Can this type of thing happen to us today in regards to being discontented with God and what He has provided us? In the example given, the Lord God of Israel commanded Moshe to build a bronze Seraph(שָֹרָף, serpent) rather than just to simply forgive their sins, they were required to look upon the Seraph and having faith before being healed. This caused the people to recognize something that is occurring on the inside that consists of both despising God and His Anointed One which is being connected to the destruction of the body by the poison of the serpent due to the consequences of sin. (Or HaChaim on Bamidbar / Numbers 21:8 Part 2) The rabbis connect lashon hara to this text, which draws in the context to all of the sins of man, idolatry, murder, adultery, etc.

The rabbis provide the interpretation on why the Torah describes these fiery serpents as the הַנְּחָשִׁים הַשְּׂרָפִים and why in Bamidbar / Numbers21:8 the Lord said to Moshe the following 21:8 Then the Lord said to Moses, ‘Make a fiery serpent, and set it on a standard; and it shall come about, that everyone who is bitten, when he looks at it, he will live.’ (NASB, ח וַיֹּאמֶר יְהֹוָה אֶל-מֹשֶׁה עֲשֵֹה לְךָ שָֹרָף וְשִֹים אֹתוֹ עַל-נֵס וְהָיָה כָּל-הַנָּשׁוּךְ וְרָאָה אֹתוֹ וָחָי) Note here the Lord speaks to Moshe using the word שָֹרָף rather than נָּחָשׁ. The reason being, the people’s slander created two kinds of serpents, the נָּחָשׁ was a poisonous bite which destroyed the body, and the שָֹרָף is the one that destroys the soul. (Or HaChaim on Bamidbar / Numbers 21:6 Part 1) The rabbis interpret this saying “in this instance the נחשים were the result of their slander against Moses, whereas the שרפים were the result of the Israelites having misrepresented what G’d had done. The Midrash mentions that the שרפים were the punishment for what they said against G’d, as these serpents burn the soul.” Like the Scientific research we live in a symbiotic relationship with God’s creation.  When something happens that is out side of the ordinary, we should take this as a warning and examine our ways such that we do not fall into the wrath of God.  And remember, believing in Yeshua the Messiah for the salvation of our souls does not exempt us from the consequences of sin as we see here in the examples given from scripture if we are living in sin. This is what it means to have faith and also to remain faithful to God according to His Word!

Watch Dr. Duane D Miller PhD Discuss “How does DNA know which job to do in each cell?” – A Spiritual Insight

How does DNA know which job to do in each cell? – A Spiritual Insight

Our Highest Calling is to be the Sons of God! פרשת...