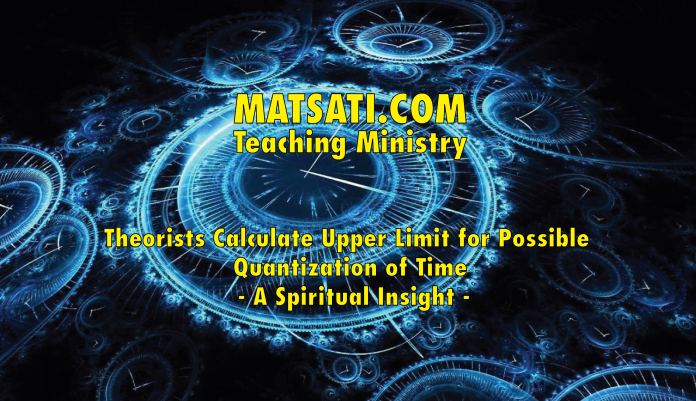 The idea being put forward here is that if time may be described by a fundamental process as opposed to simply a coordinate, it may be demonstrated mathematically that time interacts with any physical system that evolves with time. Three theoretical physicists at the Pennsylvania State University have recently published a paper [1] where they calculate the upper limit for the possible quantization of time. What does it mean to quantize something? To quantize means to restrict the number of possible values of (a quantity) or states of (a system) so that certain variables can assume only certain discrete magnitudes. Quantization, in mathematics and digital signal processing, is the process of mapping input values from a large set (often a continuous set) to output values in a (countable) smaller set, often with a finite number of elements. Rounding and truncation are typical examples of quantization processes. Quantization is involved to some degree in nearly all digital signal processing, as the process of representing a signal in digital form ordinarily involves rounding. Quantization also forms the core of essentially all lossy compression algorithms. The quantization of Energy means that a system can have only certain energies and not a continuum of energies, unlike the classical case. In physics, quantization is the mathematical process of transitioning from a classical understanding of physical phenomenon to a newer understanding, such as in quantum mechanics. This naturally comes out of the mathematical procedure for constructing a quantum field theory starting from a classical field theory. As in the case of quantum mechanics, the solutions to the wave equation are periodic and the energy levels become distinct finite and discrete, thus the understanding that energy is quantized at the atomic level. Physicists reported that if time is sufficiently small (Tc < 10-33 s) which is several orders of magnitude below any direction time measurement, an upper bound on the fundamental period of time is obtained.

The motivation of this study is due to the idea that the General Theory of Relativity suggests that time is a continuous quantity, one that can move slower or faster depending upon one’s acceleration and gravitational field conditions. Quantum Mechanics however suggests that time continues at a steady pace, in a consistent manner or steps. In order for both of these theories to be correct, this contradiction must be resolved. Some scientists have proposed that the apparent discrepancy is that time can be quantized as spacetime, similar to theories describing quantum gravity. Taking this assumption, time can be divided into smaller units is necessary in order to correspond to the Planck length. This assumption would also require that the discrete packets of time would expire and there would need to be a universal clock that exists and continues to count at very small units of time. This assumption also requires there is a universal clock throughout the universe and time would also interact with matter. Following this proposition of the quantization of time, scientists developed a theory which places an upper limit on the discrete time interval. The model that was developed is a quantum oscillator that switches between two states. The paper describes this being coupled to a slower oscillator, similar to an atomic clock. The net energy was assumed to be the same between the quantum oscillator and the slower oscillator. It is believed the oscillators would desynchronize over time and they used this assumption to calculate the upper limit of the discrete time interval to be Tc < 10-33 s. Though this time interval is too small to measure, scientists suggest it may be possible to verify this theoretical time interval by measuring the desynchronization of the two oscillators.

The Spiritual Insight that we receive from this type of research is related to time. We have been given time in this life to repent and turn from sin and this is an act of the mercy of God! According to the Torah, we read the following in Parashat Naso from Bamidbar / Numbers 5:6-8, ה וַיְדַבֵּר יְהוָֹה אֶל-מֹשֶׁה לֵּאמֹר: ו דַּבֵּר אֶל-בְּנֵי יִשְֹרָאֵל אִישׁ אוֹ-אִשָּׁה כִּי יַעֲשֹוּ מִכָּל-חַטֹּאת הָאָדָם לִמְעֹל מַעַל בַּיהוָֹה וְאָשְׁמָה הַנֶּפֶשׁ הַהִוא: ז וְהִתְוַדּוּ אֶת-חַטָּאתָם אֲשֶׁר עָשֹוּ וְהֵשִׁיב אֶת-אֲשָׁמוֹ בְּרֹאשׁוֹ וַחֲמִישִׁתוֹ יֹסֵף עָלָיו וְנָתַן לַאֲשֶׁר אָשַׁם לוֹ: ח וְאִם-אֵין לָאִישׁ גֹּאֵל לְהָשִׁיב הָאָשָׁם אֵלָיו הָאָשָׁם הַמּוּשָׁב לַיהוָֹה לַכֹּהֵן מִלְּבַד אֵיל הַכִּפֻּרִים אֲשֶׁר יְכַפֶּר-בּוֹ עָלָיו: 5:5 Then the Lord spoke to Moses, saying, 5:6 ‘Speak to the sons of Israel, ‘When a man or woman commits any of the sins of mankind, acting unfaithfully against the Lord, and that person is guilty, 5:7 then he shall confess his sins which he has committed, and he shall make restitution in full for his wrong and add to it one-fifth of it, and give it to him whom he has wronged. (NASB) The Hebrew phrase, אִישׁ אוֹ-אִשָּׁה כִּי יַעֲשֹוּ מִכָּל-חַטֹּאת הָאָדָם “man or woman does/performs from any of the sins of man” suggests the reference is to all sins, any sin, and the Hebrew text goes on saying וְאָשְׁמָה הַנֶּפֶשׁ הַהִוא וְהִתְוַדּוּ “his soul is guilty and confess.” This means that the first step for a sinner must be his confession of having committed a sin. Peter wrote in 2 Peter 3:9 The Lord is not slow about His promise, as some count slowness, but is patient toward you, not wishing for any to perish but for all to come to repentance. (NASB) This draws in the idea that the Lord God is giving us time to own up to what we have done and repent from our sins. The confession before God is a necessary part of Teshuvah (Repentance), and after one has admitted his sins the Torah states he is to make restitution and add one-fifth to the restitution and give it to the one who was wronged. In the Talmud Bavli Kiddushin 35a, the rabbis discuss the idea of both men and women (אִישׁ אוֹ-אִשָּׁה) being guilty when sinning and women are also required to bring an offering for atonement to the Tabernacle, standing before God, and confess sins and making restitution if necessary. Rambam’s Mishneh Torah, Repentance 1:1 has a discussion on how a sacrifice is only qualified for atonement if one repents and confesses his sins before God. Notice how this same condition is applicable to us today for those who have faith in Yeshua the Messiah (read Hebrews 10). His sacrifice does not atone until we repent and confess our sins before God. I have heard it taught by Christian theologians in the hypergrace movement that one does not need to repent, all one has to do is believe in Yeshua. This is inconsistent with what we read according to the Torah and what Yeshua taught concerning these Torah passages.

In Matthew 5:21-26, the context that Yeshua is making is in relation to one’s heart, having hatred towards others, even to the point of calling a person a fool, meaning that one is prideful and arrogant as opposed to being humble and broken before God when seeking atonement and forgiveness of sins. As the people of God we are called to humbble our hearts for having (i) disobeyed God’s Word, being concerned with having hurt the Lord in heaven and (ii) for hurting a fellow human being. Here Yeshua raises the bar in regards to the interpretation and application of the Torah. Yeshua reasons how murder is an act that can be committed in the heart being guilty in the heavenly court and the one who says “you fool” is guilty of “pride and arrogance” leading one to the danger of being cast into hell. This is paralleled then to the one who brings his offering to the altar of God and remembers that he has something against his brother, he is to leave the offering and go make reconciliation first. This going and making restitution is part of the act of repentance, and the offering that was brought becomes effective when we make good on our intentions of repentance by following through and making restitution. We note how the biblical text suggests there is a time constraint that is in place in regards to the command to repent, confess, and make right the wrong that was done. This is found in the illustration of making reconciliation quickly such that you are not handed over to the judge who will cast judgment and be thrown into prison. These things speak of this verse from Parashat Naso which states that the one who sins has broken faith with God in heaven. The first aspect of this breaking of faith is related to those who are in a covenant relationship with God as opposed to those who are not. Notice how one brings a sacrifice to the Tabernacle because he/she is already in a covenant relationship with God by faith. This is related to Yeshua’s Words in John 3:36 which state 3:36 He who believes in the Son has eternal life; but he who does not obey the Son will not see life, but the wrath of God abides on him. (NASB ὁ πιστεύων εἰς τὸν Υἱὸν ἔχει ζωὴν αἰώνιον· ὁ δὲ ἀπειθῶν τῷ Υἱῷ οὐκ ὄψεται ζωήν, ἀλλ’ ἡ ὀργὴ τοῦ Θεοῦ μένει ἐπ’ αὐτόν.) Note how Yeshua says the one who believes has eternal life, but the one who does not “obey” (ἀπειθῶν, apeithōn, “not obeying”) the Son will not see life. The rabbis say all of the commandments of the Torah, whether they are mandatory or prohibitive, if a man violates any one of them, either presumptuously or erroneously, then he must repent and turn away from his sinful ways, according to Bamidbar / Numbers 5:6. These things teach us that we are obligated to repent and confess before God! As it is said according to the Torah, אִישׁ אוֹ-אִשָּׁה כִּי יַעֲשֹוּ מִכָּל-חַטֹּאת הָאָדָם “When a man or woman shall commit any sin …” then they shall confess their sin which they have done (Bamidbar / Numbers 5.6-7), this is a confession of words, and our confession is to be followed by our turning from sin. This is why the words of the confession of faith written in John 3:36 are coupled to obedience to the Son, which draws us back to the Torah command.

1 JOHN 1:9 BUT IF WE CONFESS OUR SINS TO GOD, HE WILL KEEP HIS PROMISE AND DO WHAT IS RIGHT: HE WILL FORGIVE US OUR SINS AND PURIFY US FROM ALL OUR WRONGDOING. (NASB)

JAMES 5:16 SO THEN, CONFESS YOUR SINS TO ONE ANOTHER AND PRAY FOR ONE ANOTHER, SO THAT YOU WILL BE HEALED. THE PRAYER OF A GOOD PERSON HAS A POWERFUL EFFECT. (NASB)

MARK 11:25 AND WHEN YOU STAND AND PRAY, FORGIVE ANYTHING YOU MAY HAVE AGAINST ANYONE, SO THAT YOUR FATHER IN HEAVEN WILL FORGIVE THE WRONGS YOU HAVE DONE. (NASB)

Resting in Messiah and the Meaning of the Shabbat, ופקודי פרשיות...

Parashat Naso, Repentance, Confession, and the Forgiveness of sins