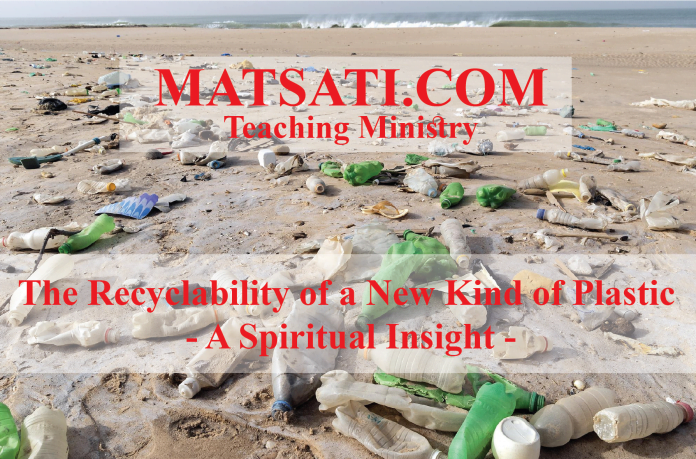 Researchers are working on new novel ways to deal with plastic waste and one of these methods is by developing a new kind of plastic. Researchers from the U.S. Department of Energy Lawrence Berkeley National Laboratory have developed a new kind of plastic called poly(diketoenamine) (PDK) which can be disassembled at a molecular level and then reassembled to take a solid shape again and again without losses in performance or quality. Lawrence Berkeley National Laboratory (Berkeley Lab), commonly referred to as Berkeley Lab, is a United States national laboratory a Department of Energy (DOE) Office of Science managed by University of California. Plastic is a material consisting of any of a wide range of synthetic or semi-synthetic organic compounds that are malleable and so can be molded into a solid. Plastics are typically organic polymers of high molecular mass and often contain other substances such as plasticisers (a substance – typically a solvent – added to a synthetic resin to produce or promote plasticity and flexibility and to reduce brittleness). Plastics are usually synthetic, most commonly derived from petrochemicals, however, an array of variants are made from renewable materials such as polylactic acid (PLA) from corn or cellulosics from cotton linters (a cotton Linter is the preferred fiber for paper casting). The success and dominance of plastics starting in the early 20th century led to environmental concerns regarding its slow decomposition rate after being discarded as trash into the environment.

The PDK monomers involved in the making of this new kind of plastic is designed in principle around the ability to exchange bonds by an energy efficient depolymerization and chemical separation that allows for the the reusability of the monomer. [1] The monomers used in this plastic use dynamic covalent diketoenamine bonds that allow for the recovery of monomers from common additives, even in mixed waste streams. This new approach to plastics points to new directions in designing sustainable polymers that have a minimal environmental impact. These plastics must still be collected for recycling, but the process of recycling has become easier.

The Spiritual insight that we receive from this idea of recyclability (in the sense that this monomer can be reused again and again) parallels the idea that our God is a God of second chances! Through repentance, faith, and faithfulness, we are given the chance to continue and begin again as a child of God to bring glory to God’s name! In the Tanach, we read an interesting story that has a NT application according to 2 Kings 6.

2 Kings 6:8-23
6:8 Now the king of Aram was warring against Israel; and he counseled with his servants saying, ‘In such and such a place shall be my camp.’ 6:9 The man of God sent word to the king of Israel saying, ‘Beware that you do not pass this place, for the Arameans are coming down there.’ 6:10 The king of Israel sent to the place about which the man of God had told him; thus he warned him, so that he guarded himself there, more than once or twice. 6:11 Now the heart of the king of Aram was enraged over this thing; and he called his servants and said to them, ‘Will you tell me which of us is for the king of Israel?’ 6:12 One of his servants said, ‘No, my lord, O king; but Elisha, the prophet who is in Israel, tells the king of Israel the words that you speak in your bedroom.’ 6:13 So he said, ‘Go and see where he is, that I may send and take him.’ And it was told him, saying, ‘Behold, he is in Dothan.’ 6:14 He sent horses and chariots and a great army there, and they came by night and surrounded the city. 6:15 Now when the attendant of the man of God had risen early and gone out, behold, an army with horses and chariots was circling the city. And his servant said to him, ‘Alas, my master! What shall we do?’ 6:16 So he answered, ‘Do not fear, for those who are with us are more than those who are with them.’ 6:17 Then Elisha prayed and said, ‘O Lord, I pray, open his eyes that he may see.’ And the Lord opened the servant’s eyes and he saw; and behold, the mountain was full of horses and chariots of fire all around Elisha. 6:18 When they came down to him, Elisha prayed to the Lord and said, ‘Strike this people with blindness, I pray.’ So He struck them with blindness according to the word of Elisha. 6:19 Then Elisha said to them, ‘This is not the way, nor is this the city; follow me and I will bring you to the man whom you seek.’ And he brought them to Samaria. 6:20 When they had come into Samaria, Elisha said, ‘O Lord, open the eyes of these men, that they may see.’ So the Lord opened their eyes and they saw; and behold, they were in the midst of Samaria. 6:21 Then the king of Israel when he saw them, said to Elisha, ‘My father, shall I kill them? Shall I kill them?’ 6:22 He answered, ‘You shall not kill them. Would you kill those you have taken captive with your sword and with your bow? Set bread and water before them, that they may eat and drink and go to their master.’ 6:23 So he prepared a great feast for them; and when they had eaten and drunk he sent them away, and they went to their master. And the marauding bands of Arameans did not come again into the land of Israel. NASB (NIV: So he prepared a great feast for them, and after they had finished eating and drinking, he sent them away, and they returned to their master. So the bands from Aram stopped raiding Israel’s territory.)

Notice what happened here in 2 Kings 6, the man of God (Elisha) was led by the Spirit of God to teach us a very important principle. Dealing with the enemy, Elisha touched his enemies with the righteousness and love of God, which in turn caused peace. This is what Yeshua taught us to do, to be good to our enemies, to feed them, and to turn the other cheek. The Midrash on Mishley / Proverbs 25:21-22 states something very similar saying the following,

The rabbinic attitude to feed our enemies and expect God to cause them to reconcile is very close to Yeshua’s teaching on the sermon on the mount. The Talmud also expresses other opinions, and some Christians mistakenly characterize the rabbis as being legalistic and one sided, demanding everyone to agree with their opinion but the Talmud records various opinions, for example “If someone is going to kill you, get up early and kill him first” (Talmud Bavli Sanhedrin 72a). The Preservation of life is a moral principle based on the authority of the Torah just as we see here in 2 Kings 6. Yeshua’s teaching on the sermon on the mount was dealing with peace and reconciliation between individuals. Yeshua points out something that is related to what we read in the Torah portion Parashat Emor that is related to the command “an eye for an eye and a tooth for a tooth.” In the command of “an eye for an eye” the rabbis speak about how this command is applied, not to maim the offending individual, but to require financial compensation for the loss. (Talmud Bavli Bava Kamma 83b, Mishnah Bava Kamma 8:1) Many Christian teachers on this topic point to this command with the charge on how bad the “LAW” of God is compared to the gospel of Christ in an attempt to pitt the gospel against the text of the Torah. The proper interpretation of this text is that we are given the opportunity to be merciful to the one who offends regardless how we are being treated. Yeshua in his Sermon on the Mount taught us the application of this command saying “do not resist evil but turn the other cheek.” The idea here that Yeshua is teaching us is related to both mercy and righteousness having the opportunity to touch the unrighteous person who is sinning. We go forth into the world, the Lord God Almighty living in and through us, we are able to touch the life of another who does not know the Lord through this teaching on turning the other cheek. By this the unrighteous personally sees the mercy and love of God demonstrated in the life of the child of God. This action then may have the property of drawing the unrighteous person to faith in the God of Israel and His Messiah Yeshua. What happens is the wicked man’s world becomes confounded by the love of God through His people. This is what Solomon meant when he wrote to feed our enemies and heaping coals upon their head (Mishley / Proverbs 25). These righteous deed of “love your enemy” may cause a person to come to his senses and repent and seek the God of Israel, and turn from his wicked ways. Believing upon Yeshua and asking the Messiah to enter into our lives, the Lord God Almighty will work a miracle and cause the heart and life to change and gravitate towards seeking the righteousness and holiness of our Father in heaven and of His Son Yeshua! An important point is, one cannot obey the commandments that are not properly understood. The Sermon on the mount teaches us an approach to living based upon a fresh and insightful interpretation of the Torah and the commandments. The interpretation is Jewish to the core, and best understood in the context of ancient Judaism. The essential element that is added to the text in Mishley / Proverbs 25:21-22 (feeding your enemy), by way of the rabbinic commentary, is that God Himself will work to establish peace between our enemies. It is this same kind of mercy and grace the Lord God Almighty shows us when we sin. We have the opportunity to repent, turn from our sin, and return to the way of God. This is the kindness of God and shows us how obedience to the Scriptures is only possible if the Lord God Himself is actively working in our lives by the power of His Spirit! The example we receive from the Scriptures, something we can place our hope in, is of the Lord God working in the hearts of our enemies by turning a would be murderer (hate = murder) into a friend. Winning over an enemy is a sign of great moral strength and the Talmud praises this attitude of humility and long suffering when an individual has to endure personal insult. Those who are reviled and do not respond likewise rejoice in the teaching “but they who love him are as the sun when it goes forth in its might” (Judges 5:31). Turning the other cheek is not a sign of weakness but it demonstrates an inner strength that transforms the disciple in the midst of suffering and possesses the power to transform the aggressor who may decide to seek God. (Talmud Bavli Shabbat 88b) This is the spiritual insight we receive from the scientific research on reusable monomer technology for plastics. The Lord God Almighty touches each one of us in righteousness and truth, and by His mercy we are drawn to seeking the Lord God of Israel, His Messiah Yeshua, and bringing glory to the Name of God by repenting and then living for Him. It is in these things we learn to also show mercy and love towards one another just as the Scriptures say! What a wonderful God we serve!

Microbiologists Discover Bacteria That Feed on Metal – A Spiritual Insight

Tehillim / Psalms 65, Part 1, The Covenant and its importance