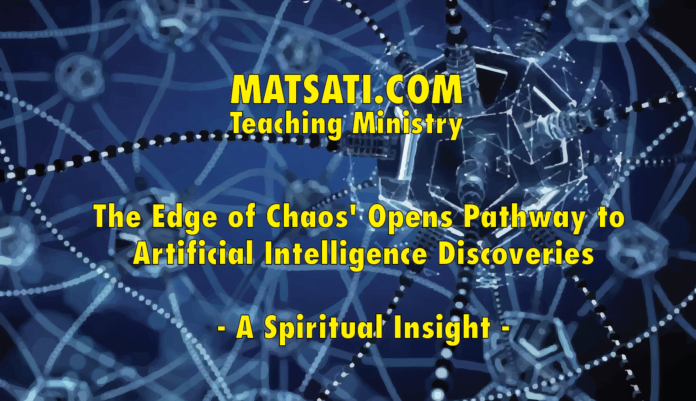 This work [1] reports on the neuromorphic dynamics of nanowire networks (NWNs), a unique brain-inspired system with synapse-like memristive junctions embedded within a recurrent neural network-like structure. In other words, researchers have discovered a way to manufacture an artificial neural network using nanowires which can be tuned to exhibit the spatio-temporal properties of switching dynamics which are consistent with brain-like behavior and response when electrically stimulated.

It is widely postulated that optimal information processing in non-linear dynamical systems may be achieved close to a phase transition, in a state known as criticality. The literature reveals distinct phase transitions are associated with criticality, notably ‘avalanche criticality’ and ‘edge-of-chaos criticality.’ This is a technical way of saying that by keeping the neutral network of nanowire “at the edge of chaos,” it performed tasks at an optimal level. The researchers conclude saying “Understanding how to harness network structure for optimal information processing provides an exciting future challenge for neuromorphic network research.” This means the underlying nature of neural intelligence is physical, therefore, their discovery opens an exciting avenue for development of intelligent artificial intelligence.

The researchers used silver nanowires (10 micrometers x 500 nanometres) arranged randomly on a 2D plate where the wires overlapped to form electrochemical junctions. When electrical pulses are sent through the network the signal follows the shortest optimal path. The random architecture is said to enable the network to remember previous pathways through the system. The research paper describes issues with tuning the electrical signals in order for the Neural network to work properly. If the signal overwhelmed the network the output was chaotic and unusable. The optimal sign was that which would produce output that was on the edge of the chaotic state (i.e. just before the output became chaotic and unusable). The nanowire junctions function as switches, and the network is capable of remembering pathways, so this capability causes the memory and computational center to be combined. This creates a memory and computational network with a random system of Silver nanowires. This kind of computing system is a “signal in” and “signal out” type of computing known as “reservoir computing.” This means there is no need to keep the hardware powered up thus potentially freeing up large amounts of energy.

The Spiritual Insights that we receive from this type of research is related to chaos and order. Chaos is a situation where everything is complex and unpredictable; on the other hand, order is where things are placed in their proper place, rigid, stable, and imposing restrictions or limitations on something. Navigating between the two can be very difficult for some. We all want and need some form of consistency in life, because chaos and unpredictability are not ideal for living. Even the scientific research on neural networks using silver nano-wires reveals that chaos is not ideal, but rather the state just before the system became a chaotic system. Based upon the scientific research and what we read in the scripture, we understand that order is a good thing, this was the purpose of the giving of the Torah to a certain extent, as restricting our lives such that we walk in life and truth, as opposed to darkness, wickedness, sin, and death. Today however there are theologies and doctrines which stand in opposition to the Torah causing God’s people to reject a significant portion of God’s Word! Our lives and our relationship with God should not consist of being partly stabilized and partly chaotic as chaos can lead to unpredictability and curiosity, the very point that the Lord makes in regard to His many warnings against the nations and their idolatry.

The first few verses from the Bible state the following:

Bereshit / Genesis 1:1-3
1:1 In the beginning God created the heavens and the earth. 1:2 The earth was formless and void, and darkness was over the surface of the deep, and the Spirit of God was moving over the surface of the waters. 1:3 Then God said, ‘Let there be light’; and there was light. 1:4 God saw that the light was good; and God separated the light from the darkness. (NASB)

Most people have the ability to quote the first verse in the bible, and even the third verse which states the famous יְהִי-אוֹר “let there be light!” Interestingly enough the second verse is less known and provides details on the creation saying, וְהָאָרֶץ הָיְתָה תֹהוּ וָבֹהוּ וְחשֶׁךְ עַל-פְּנֵי תְהוֹם וְרוּחַ אֱלֹהִים מְרַחֶפֶת עַל-פְּנֵי הַמָּיִם “The earth was formless and void, and darkness was over the surface of the deep, and the Spirit of God was moving over the surface of the waters.” Here we find the statement that causes us to understand, in the beginning, there was the presence of God, darkness, emptiness, and void (nothingness). This narrative explains to us how God intentionally begins his creation within a dark and empty space. Note something, today within the emptiness of space (outer space) this void is actually filled with a great amount of energy and ionized particles (cosmic rays) sourced from the sun and stars. At this time in creation however, according to Bereshit / Genesis 1, there is no sun, moon, and stars, and so space was truly void and empty. The emptiness of space, and the darkness mentioned here in the opening passages from the Torah actually are incredibly significant! The way this is written describing these events, and even the events themselves in Bereshit / Genesis 1:2 is very intentional. By starting with chaos, darkness, emptiness, the Lord God Almighty is teaching us His truths about how He works in our lives!

What do we learn from these first few verses, א בְּרֵאשִׁית בָּרָא אֱלֹהִים אֵת הַשָּׁמַיִם וְאֵת הָאָרֶץ: ב וְהָאָרֶץ הָיְתָה תֹהוּ וָבֹהוּ וְחשֶׁךְ עַל-פְּנֵי תְהוֹם וְרוּחַ אֱלֹהִים מְרַחֶפֶת עַל-פְּנֵי הַמָּיִם: ג וַיֹּאמֶר אֱלֹהִים יְהִי-אוֹר וַיְהִי-אוֹר: “In the beginning God created the heavens and the earth. The earth was formless and void, and darkness was over the surface of the deep, and the Spirit of God was moving over the surface of the waters. Then God said, ‘Let there be light’; and there was light.” We learn that God’s Word is powerful, not just to create, but to bring order out of chaos or nothingness! Everything the Lord made, all that He created, everything began with a formless void, until God’s word via His presence comes and brings life, peace, order, and beauty! It is interesting to note how when we depart from God’s Word, when the power of God’s presence leaves our lives, we descend back into chaos.

We note how John opened his book saying, בְּרֵאשִׁית הָיָה הַדָּבָר, וְהַדָּבָר הָיָה עִם הָאֱלֹהִים, וֵאלֹהִים הָיָה הַדָּבָר.הוּא הָיָה בְּרֵאשִׁית עִם הָאֱלֹהִים.הַכֹּל נִהְיָה עַל–יָדָיו, וּמִבַּלְעָדָיו לֹא נִהְיָה כָּל אֲשֶׁר נִהְיָה. 1:1 In the beginning was the Word, and the Word was with God, and the Word was God. 1:2 He was in the beginning with God. 1:3 All things came into being through Him, and apart from Him nothing came into being that has come into being. (NASB) This is the Word of creation, that which brings order and life! John describes how the Word of God comes and enters into a dark, sin filled, and chaotic world and the Word brings life, light, and order once more. Notice how Yeshua’s ministry functioned, he came to undo the chaos and the darkness left by Sin. Yeshua healed diseases, he opened the eyes of the blind, he healed the lame so they could walk, the deaf to hear, and the dead to come to life! Remember how he told the storm to be quiet (Mark 4:39) and the wind listened. Forgiveness comes through atonement, thus Yeshua forgives adulterers, murderers, and thieves, enabling them to have fellowship with God and transforming their entire lives from chaos, sin, impurity, and shame, to people of character, justice, and truth.

Note what happened when the Word of life died, when the Word of God left this world, when Yeshua was upon the cross and he had died. We are told there was darkness, this is symbolic of the return to chaos, void, and emptiness, and the earth shook. The Living Word of God was the architect of creation, the Word of life itself, was forced into the darkness, in order to make atonement for mankind. We note how this process of reversal, is the process of being “de-created,” the body was put upon a path to return to its base elements based upon the laws of chemistry and thermodynamics. The world rejected the light and life of God. Notice then what happened three days later? Yeshua was re-created, and the power of the Word of the Living God led to the resurrection of his body to life! This is how we understand the power of God as Paul writes according to Romans 8. In Romans 8, Paul speaks of the mind, the body, the spirit, and the living Word of God. He says the mind that is set upon the flesh is death (8:6), and this is because such a mind is hostile towards God (8:7). Paul writes the reason the mind is hostile towards God is because such a mind does not subject itself to the Torah of God! In Jewish thought the Torah is also called the “Tree of Life,” as it points us to God as He reveals Himself to us. Paul wrote saying, “For all who are being led by the Spirit of God, these are sons of God.” (Romans 8:14) This means that if we are being led by the Spirit we will be walking in God’s ways and obeying His Torah! Paul connects the Spirit of God dwelling in our midst, to being made alive in the Spirit because of righteousness, and the power of God to raise Yeshua up is present to raise us up also to live our lives for the Lord according to His Word. His conclusion is if we are living by the Spirit we are putting to death the sinful deeds of the body. (8:13) So, with all of these things in mind, “Is your life destroyed by sin? Is your family unraveling? Is Your self-image mired in darkness?” Only the power and presence of God can turn things around. Without the Almighty God in our lives, there is nothing but chaos, misery, and despair. God has shown us He can creeat anything out of nothing. He can surely re-create everything in our lives, He is the living God!

How to Walk in the Power of God, פרשת נִצָּבִים, Parashat...

Bits of Torah Truths, Parashat Pinchas, The Blessing of the King...