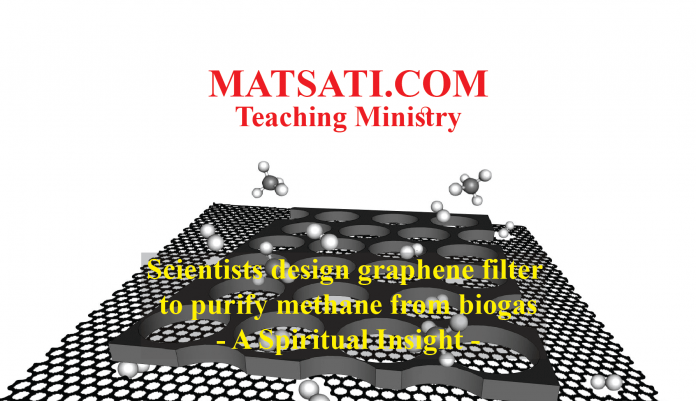 Researchers from the University of New South Wales, Australia have developed a graphene technology that is able to generate sustainable energy in municipal wastewater treatment plants. Graphene is an allotrope of carbon in the form of a single layer of atoms in a two-dimensional hexagonal lattice in which one atom forms each vertex. Graphene has a special set of properties which set it apart from other allotropes of carbon. In proportion to its thickness, it is about 100 times stronger than the strongest steel. Yet its density is dramatically lower than any other steel (7,750 and 8,050 kg/m3), with a density of 2.267 kg/m3. It conducts heat and electricity very efficiently and is nearly transparent. Graphene has been used to improve the quality of drinking water, [1] and recently has been discovered to be able to purify methane from biogas produced in wastewater. [2] Researchers discovered atom-thick graphene membranes can separate gas mixtures with a high efficiency. Gas separation usually takes place with the use of synthetic membranes made from polymers. The single layer graphene membrane is the latest thing which uses molecular sized pores to allow different sized gas molecules to pass through. The progress of this technology is limited by the difficulty in scale up. The first difficulty is in the methodology to incorporate molecular-sized pores into the layer of graphene in a uniform manner and the second difficulty is for actually manufacturing mechanically robust layers which are crack and tear free, large area membranes. Researchers from EPFL Valais Wallis, Switzerland have developed a large-area, single-layer graphene membrane that can separate hydrogen from methane with a high-efficiency (separation factor 0f 25%), by an unprecedented hydrogen permeance through a porosity that was only 0.025%. [2] This membrane contains nanopores which allow hydrogen to permeate through leaving methane by itself. This is known as gas sieving. The membrane is capable of withstanding pressures of 7 bar and 250 C which are industrial relevant pressures and temperatures. Researchers reported the ability to produce a membrane that is 1 square mm which is significantly larger than previously reported. This means the manufacturing technique was capable of producing a few square microns without cracks. The current effort being made is to incorporate a higher density of nanopores into the graphene to make this technology realizable. This technology from wastewater would be a method to obtaining methane from renewable sources, a virtually unlimited source of methane for methane powered busses and cars.

1 Peter 1:13-16
1:13 Therefore, prepare your minds for action, keep sober in spirit, fix your hope completely on the grace to be brought to you at the revelation of Jesus Christ. 1:14 As obedient children, do not be conformed to the former lusts which were yours in your ignorance, 1:15 but like the Holy One who called you, be holy yourselves also in all your behavior; 1:16 because it is written, ‘You shall be holy, for I am holy.’ (NASB)

1 Corinthians 6:9-20
6:9 Or do you not know that the unrighteous will not inherit the kingdom of God? Do not be deceived; neither fornicators, nor idolaters, nor adulterers, nor effeminate, nor homosexuals, 6:10 nor thieves, nor the covetous, nor drunkards, nor revilers, nor swindlers, will inherit the kingdom of God. 6:11 Such were some of you; but you were washed, but you were sanctified, but you were justified in the name of the Lord Jesus Christ and in the Spirit of our God. 6:12 All things are lawful for me, but not all things are profitable. All things are lawful for me, but I will not be mastered by anything. 6:13 Food is for the stomach and the stomach is for food, but God will do away with both of them. Yet the body is not for immorality, but for the Lord, and the Lord is for the body. 6:14 Now God has not only raised the Lord, but will also raise us up through His power. 6:15 Do you not know that your bodies are members of Christ? Shall I then take away the members of Christ and make them members of a prostitute? May it never be! 6:16 Or do you not know that the one who joins himself to a prostitute is one body with her For He says, ‘The two shall become one flesh.’ 6:17 But the one who joins himself to the Lord is one spirit with Him. 6:18 Flee immorality. Every other sin that a man commits is outside the body, but the immoral man sins against his own body. 6:19 Or do you not know that your body is a temple of the Holy Spirit who is in you, whom you have from God, and that you are not your own? 6:20 For you have been bought with a price: therefore glorify God in your body. (NASB)

These NT scriptures repeat the call to holiness. In 1 Peter 1, the call to holiness is based upon the hope that will be brought to us at the revelation of Yeshua in the last days.  This is coupled to turning from our former lusts and sins! Paul wrote in 1 Corinthians 6 outlining the moral constraints that mark the people of God as separate from the world. If one is actively practicing these sinful things, the presence of God will only be available for turning the sinner to repentance and turning from sin. The only miracle will be to turn the heart of the unrepentant to repentance.  The intimacy of our bodies with the Spirit of God is found in 1 Corinthians 6:13-17, the context is not about doing away with the laws of kashrut, but to the sanctity of the body, its holiness in regards to immorality.  Believers in Yeshua are to be free from sin that is so prevalent in this current age and our culture, such as immorality, and idolatry, slander, etc, the list could go on and on. As important as this scientific research is on the separation of gases and renewable resources, we who believe in Yeshua the Messiah are not exempt from the call to be separate from the world in the sense of the call to personal holiness as God has defined it! If we do not pursue holiness and righteousness in our lives, we will not be of use to God, just as we see in the research on the functionality of these gases needing to be separated from one another.  We too are separated upon placing our faith in Yeshua.  Now is the difficult work of living for Him!  Yeshua holds us up to a very high standard, a standard that is defined according to God’s Torah!  Thank God He has given us His presence in our lives to help us every step of the way!

A New Kind of Matter that Bends the Laws of Physics...

Knowing before Whom We Stand, פרשת פסח, Parashat Pesach, Bits of...

Our Faith is something that is Practiced!, פרשת בהר, Parashat Behar,...