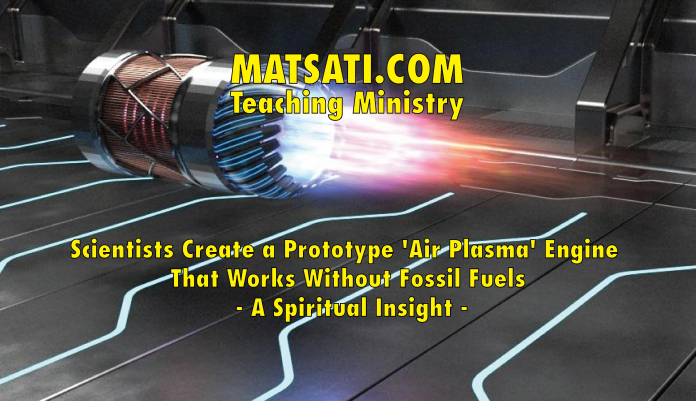 Recently, researchers published in the Journal AIP Advances [1] a new concept engine for aircraft that runs without using fossil fuels.The prototype engine was able to propel itself without the use of fossil fuels suggesting the future possibility of carbon-neutral air travel. The engine compresses air and ionizes it using microwave radiation generating a plasma that provides thrust. This new engine design provides the opportunity to use electricity to fly in the air as opposed to liquid fuel. Fossil Fuels are used today as the only option for long distance and fast air travel. Fossil fuels are both unsustainable and potentially dangerous and are the source of greenhouse gas emissions into the earth’s atmosphere (i.e. combustion of liquid fuels). It has been reported that commercial air travel is responsible for 2.5% of greenhouse gas emissions, excluding those for military jets which is unreported. The motivation for this work was said to be to help solve global warming problems due to the burning of fossil fuel technology.

This is a proof of concept prototype engine. The prototype engine was able to launch a 1 kilogram (2.2 lb) steel ball twenty four millimeters (approximately 1 inch) into the air. This seems small, but actually is the approximate thrust, proportional to scale, as a conventional jet engine. Researchers at the Institute of Technological Sciences at Wuhan University, an engineer, stated “Our results demonstrated that such a jet engine based on microwave air plasma can be a potentially viable alternative to the conventional fossil fuel jet engine.”

A question one may ask is “what is plasma?” The word Plasma is derived from the Ancient Greek word πλάσμα​, meaning “moldable substance,” and is one of the four fundamental states of matter. This state of matter was first described by chemist Irving Langmuir in the 1920s. Plasma consists of a gas of ions (atoms) which have some of their orbital electrons removed and free electrons. Plasma can be artificially generated by heating a neutral gas or subjecting it to a strong electromagnetic field to the point such that an ionized gaseous substance becomes increasingly electrically conductive. The resulting charged ions and electrons may then become influenced by long-range electromagnetic fields, making plasma dynamics more sensitive to these fields than a neutral gas.

Plasma and ionized gases have properties and display behaviors unlike those of the other states. Based on the temperature and density of the environment in which the plasma is generated, the plasma may consist of partially ionized or fully ionized forms. Neon signs and lightning are examples of partially ionized plasmas. The Earth’s ionosphere is a plasma and the magnetosphere contains plasma in the Earth’s surrounding space environment. The interior of the Sun is an example of fully ionized plasma, along with the solar corona.

Positive charges in ions are achieved by stripping away electrons orbiting the atomic nuclei, where the total number of electrons removed is related to either increasing temperature or the local density of other ionized matter. This also can be accompanied by the dissociation of molecular bonds, though this process is distinctly different from chemical processes of ion interactions in liquids or the behavior of shared ions in metals. The response of plasma to electromagnetic fields is used in many modern technological devices, such as plasma televisions or plasma etching.

There had been previous attempts at creating a plasma jet thruster. NASA’s Dawn space probe uses xenon gas to generate a plasma which is not able to overcome the friction in the earth’s atmosphere and thus not powerful enough to be used in an aircraft. (Note, Xenon is also not very abundant.) In this engine design, the high pressure air is converted to a plasma using microwaves at 1 kW at 2.45 GHz. The flame temperature was able to reach greater than 1000 C. The paper [1] reports “The battery pack of a Tesla Model S electric car has 416 horsepower, or 310 kW equivalent. Assuming linear extrapolation, using such a power, the jet thruster can generate a force of approximately 8500 N.” These results suggest it is possible to construct a high-performance microwave air plasma jet engine using multiple microwave sources in parallel operation, that would be capable of moving an aircraft at scale in comparative fashion to conventional jet engines.

The Spiritual insights that we receive from this type of research is related to the technological aspect of this new engine design. Air from the atmosphere is compressed, its state is changed to a plasma, and then released at the outlet to provide thrust for an aircraft. This is analogous to repentance, specifically to teshuvah (תְּשׁוּבָה), a word often translated as “repentance,” though it’s more accurately understood as turning (shuv, שׁוּב) to God in response to His call. The idea of a change of state, like we see in the scientific research on the change of state of air to a plasma and thrust, teshuvah can mean both turning and answering, a change of state and a response. The idea of repentance is found in the changing of the mind, to thinking differently. This is what is drawn out in the Shema according to Devarim / Deuteronomy 6:4-10.

The Greek text adds the word διανοίας meaning “mind” saying we are to love the Lord your God with all your heart, and with all your soul, and with all your mind, and with all your strength. The source text from Devarim / Deuteronomy 6 has the word meod meaning “more” or “much” which may be interpreted as to mean the power of the mind. The Greek text uses the word ἰσχύος for meod, so why Yeshua chose to render this verse with “mind” (διανοίας ) is a good question. The word for “understanding” and “mind” are related to this changing of the mind, or the changing of a way of thinking. There must be a change of mind, or a change in the way of thinking when it comes to Teshuvah (Repentance). The Lord God Almighty holds us responsible to repent and believe the truth of the gospel! This means that He has made it possible for us to do this. God made us to have the ability to discern differences in morality, rational thought, logic, and capable of understanding order and to find the meaning of life. This is how God created us in His image, something that is distinctly separate and unique from all the rest of creation. For example, we can compare terms, make inferences, to generalize, or develop abstract ways of thinking, all of these are meant to show us how unique we are and is noteworthy of who we are as being made in God’s image. Because of these things, the Lord God of Israel holds us accountable even to the way that we think, just as we discussed in last week’s article! To be able to use our minds, to think, to understand, to comprehend at various levels, even to considering the truth about God, this is available to every man, woman, and child. We have to think in order to exist, to live, and think clearly which is a very valuable thing, and precious. This is the argument Paul was making in Romans 1:19-20 that “the invisible things of Him from the creation of the world are clearly seen so that people are without excuse.” God made us with the ability to discern the truth. In relation to the scientific research, we need the Lord’s help, the source of all truth, to understand the gospel message. This change of state of air to an ionized gas (plasma) is what we need as God’s people, to be changed from the inside out. This is the world of the Spirit of truth, such that we reject what is false (1 John 4:6), and walk morally, and ethically, by God’s help. God Himself helps us to do this as Yeshua said in John 14:16-17 saying, “I will ask the Father, and He will give you another Helper, that He may be with you forever; this is the Spirit of Truth (רוּחַ הָאֱמֶת), whom the world cannot receive, because it neither sees him nor knows him.” The Spirit of Truth is necessary in order to “discern what is the will of God, what is good, acceptable, and perfect.” (Romans 12:2) These things are drawn out from the Shema in the sense of how Yeshua rendered the verse as “love the Lord your God with all your heart, and with all your soul, and with all your mind, and with all your strength.” The followers of Yeshua are commanded to love God, to love the truth, and to understand our faith. “The Word of truth” is the power of God as Paul wrote in 2 Corinthians 6:7. The Word of Truth shows us the way, by the Spirit of God to believe in Yeshua the Messiah (John 14:6). The Lord God Almighty commands all people to believe this truth (Acts 17:30-31, 1 Timothy 2:4). This is why Paul wrote that people perish because they refuse to love the truth in order to be saved. (2 Thessalonians 2:10-12) The point is, we need God’s help to believe. We are in a battle for the truth, because the battle is in the mind, to love God, and to love others.

The Scientific research describes a new concept engine that has the potential to change the way we fly, from the use of fossil fuels to carbon neutral flight. In parallel fashion, the Lord God Almighty is calling to us to repent, to turn from anger, to turn to a new way of thinking, to believing in the Messiah Yeshua, and to seek the truth. Genuine repentance implies that we will change our way of thinking, and our way of life. The power of God is in the transformed life, and without God’s help this is impossible. The Lord God Almighty helps us to think clearly, and to turn our thoughts to Him, even to have faith! We ask the Lord, please help us to turn away from our sins, to turn our thoughts to Yeshua and our Father in Heaven, and to turn from the distractions that attempt to seduce us away from God and His Holy Word. Help us Lord to live our lives for You, to bring glory to Your Name, and to have a purity of heart to do Your Will in the truth according to Your Word! Amen!

Scientists Present New Theory Explaining Why We’re the Only Humans on...

Watch – The weapons of our warfare – The Pentagon Wants...