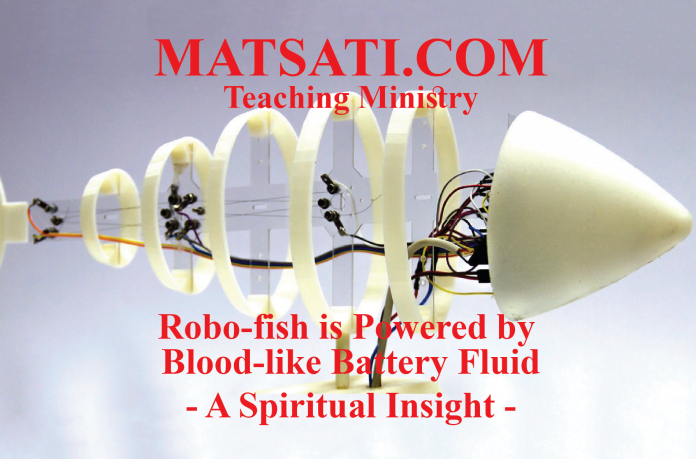 Recently a team of engineers at Cornell’s Organic Robotics Laboratory manufactured a soft-bodied robotic fish powered by electric blood which serves as an energy source and a hydraulic fluid for propulsion. [1] Their research was published in the Journal Nature detailing how this system works. The premise behind this particular approach is due to the energy storage systems being the most critical limitations to robotic autonomy. Batteries size, weight, materials, and power density, cause a design constraint on robotics and what exactly they are capable of doing autonomously. The researchers used bio-inspired application of the blood system to develop a synthetic energy-dense circulatory system contained within the robot itself. They created a vascular system, that combines a hydraulic fluid and an electrolyte which geometrically increases the energy density of the robot enabling 36 hours of operation. The fish uses two hydraulic pumps that are interconnected to zinc-iodide flow cell batteries. One pump moves the tail by moving the fluid from one side of the tail to the other. The other pump moves fluid stored in the dorsal fins into the corresponding pectoral fins. The fish is relatively slow, it swims at a rate of 1.5 body lengths per minute, so there is room for improvement. The idea of soft-bodied robots is not a new idea, but designing a hydraulic fluid which also functions as an energy supply is new. By the use of this fluid-blood-battery liquid system, the mass of the robot is significantly reduced increasing the energy density due to a lower weight of the total system. The future of this type of robotics includes developing autonomous aquatic robots with the potential for marine exploration (i.e. coral reefs), inspection of pipelines, and underwater cables.

The Spiritual insight we receive from this type of research is related to the new engineering design of this robot and the blood that is a necessary part of living creatures. The obvious connection is to what we read in the Torah from Vayikra / Leviticus 17 which states the following.

The Torah recognizes the significance of the blood which states that it contains the life of a creature, and how the blood is used to make atonement for the soul. (Vayikra / Leviticus 17:11) The life that is “in the blood” was reserved for sacrificial atonement upon the altar of HaShem (כִּי נֶפֶשׁ הַבָּשָׂר בַּדָּם הִוא). Now, the significance of the blood is revealed to us in the story of the Exodus within the nation of Israel that the nation of Israel was “born” by means of the blood of the Passover lamb, the blood which was spread upon the lintel and the door posts. In addition to this, the Passover was a means for the nation of Israel to receive the revelation given at Sinai. The revelation at Sinai led to the establishment of the ritual expression of atonement in a system that required the shedding of the blood of sacrificial animals at the entrance to the Tabernacle. This is so significant that the Lord God says in Vayikra / Leviticus 17:3 ‘Any man from the house of Israel who slaughters an ox or a lamb or a goat in the camp, or who slaughters it outside the camp, 17:4 and has not brought it to the doorway of the tent of meeting to present it as an offering to the Lord before the tabernacle of the Lord, bloodguiltiness is to be reckoned to that man. He has shed blood and that man shall be cut off from among his people. (NASB) In addition to this, the Mishnah Pesachim 10:6 interprets the Passover wine as a metaphor for blood that seals a covenant between God and his people. Therefore, according to the Written and the Oral Torah, we are told the life is in the blood which seals the covenant of God. The cup symbolizes identifying with the life and redemptive mission of the Mashiach. Considering the scientific research and the engineering design of pumps that move the hydraulic/electric fluid of the robotic fish, we too have a pump, it is called our heart, and the heart is hebraically known as the center of our thoughts, the source of both good and evil. King Solomon wrote in Mishley / Proverbs 4:23 Watch over your heart with all diligence, For from it flow the springs of life. (NASB, כג מִכָּל-מִשְׁמָר נְצֹר לִבֶּךָ כִּי-מִמֶּנּוּ תּוֹצְאוֹת חַיִּים:) In the Hebrew Scriptures, the Law of God (Torat Adonai) refers to the revelation of God’s will for human beings to live rightly before Him in light of the reality of His existence. It is because of this, the Torah is understood to generally refer to the “moral law” as an imperative for human reason, to live with justice, with a duty to do what is right, and to love our neighbor, and such similar universal principles that God has laid out according to His Word. When we think upon these things, we get a sense of alarm due to our own moral condition being revealed. The voice of conscience is a witness that we have violated the standards of love, decency, and justice in our lives. God has given all of us an intuitive sense of right and wrong. From both an external and internal sense, we would be condemned by the verdict of the law. It is for this reason the Lord God Almighty has given the life in the blood to make atonement for our souls. This is coupled to the mercy of God in the Torah as the Scriptures introduce the concept of divine grace (chesed, mercy, lovingkindness), deliverance, and redemption, that is obtained by faith! The impurity that is from within (sin), that proceeds from the heart, is the purpose of God’s sacrificial love towards us in that He gave His Son Yeshua the Messiah to make atonement for our souls. He removed the curse by His grace/mercy and love. By the reason of the Torah, we are given this opportunity through mercy and repentance to call upon the name His Son Yeshua the Messiah. Paradoxically, we confess our inability to keep the mitzvot given to us according to the Torah, and seek the power of God by His Spirit to overcome sin in our lives. Through the Messiah, we receive the everlasting kapporah (atonement) through the sacrificial death of Yeshua as the Lamb of God who takes away the sins of the world (John 1:29). The blood of the lamb was given such that we might inherit the promises of God. The Torah therefore has a deeper covenantal purpose, directing us to God’s Anointed One through whom we receive both the promises of God and the Peace that surpasses all understanding!