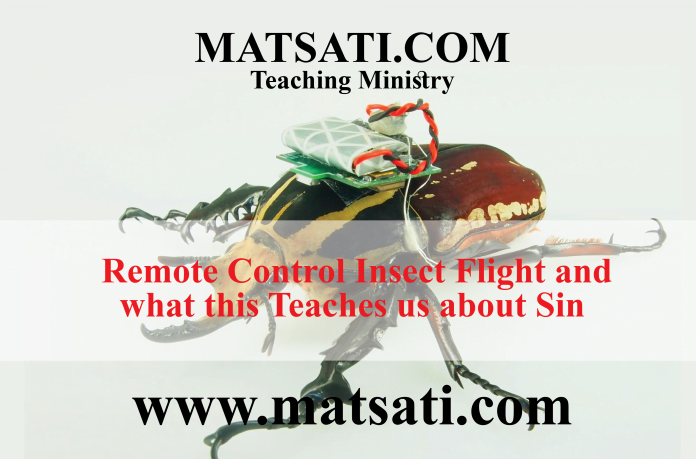 The advances in in science and technology are mind boggling.  I recently read a research paper that was published back in 2009 that describes how researchers can control an insect’s flight path wirelessly via neural implants.  The research paper is titled “Remote Control Insect Flight” (https://www.frontiersin.org/articles/10.3389/neuro.07.024.2009/full) and was a part of the U.S. Defense Advanced Research Projects Agency (DARPA).  This research was conducted almost 10 years ago.  Researchers used a giant flower beetle and implanted electrodes and a radio receiver on its back.  With these things scientists at the University of California were able to send electrical signals from a nearby controller that commanded the insect to take off, turn left, turn right, or hover in mid-flight.  The Objective of this research was to use the insect one day for surveillance purposes.

The idea behind using beetles was to take advantage of the beetle’s natural abilities of flight as opposed to re-creating a flight system from scratch.  The scientists used cybernetic implants, inserting electrodes and electronic components, for controlling its wings.  The electronic components consisted of off the shelf microprocessor, a radio receiver, a battery, a custom printed circuit board, six electrodes implanted into the animal’s optic lobes and flight muscles.  The flight commands were sent wirelessly to the beetle via a radio frequency transmitter.  Oscillating electrical pulses were delivered to the beetle’s optic lobes to trigger take off, hovering, and left and right control.  In biology, the ability to control insect flight leads to a greater understanding of insect communication, mating behavior and flight energetics, and for studying the foraging behavior of insect predators such as birds, as has been done with land based robots (Michelsen et al., 1989 ). In engineering, electronically controllable insects could be useful models for insect-mimicking MAVs/NAVs (Wu et al., 2003 ; Schenato et al., 2004 ; Wood, 2008 ). One of the uses for tetherless, electronically controllable insects would be as MAVs/NAVs which may serve as couriers to locations not easily accessible by other means (human or robot).

Studies of both locusts and fruit-flies show there is evidence of visual, auditory or wind stimulus of receptors which lead to the insect brain modulating the wing to compensate for wind patterns and maintain flight (Burrows, 1996 ; Budick et al., 2007 ). Researchers chose to send electrical signals into the inter-neurons in order to start, stop and modulate wing oscillations that work along side of the direct electrical stimulus of the brain. The functionality of the control was relatively simple, a series of pulses can be sent to the wing muscles that triggers the actions, and the beetle then takes care of the rest.  For example, “during flight, a turn was triggered by applying 2.0 V, 100 Hz positive potential pulse trains to the basalar muscle opposite to the intended turn direction.” This allowed for normal function, so the beetle could control the flapping of the wings, etc.  This type of research being conducted in 2009 has been enabled by advances in the microelectronics industry and the miniaturization of microprocessors and batteries.

What is it about this type of research that teach us about sin and its effects upon our lives?  There are a number of points this research paper draws out that is quite interesting. One of the most striking points the paper makes is in the ability to control flight through the triggering of reaction by modulated pulse trains into the basalar muscles of the beetle.  The idea of left and right turn effects being produced by sending a signal to the opposite wing, seems to parallel the idea of the left hand not knowing what the right hand is doing. From a Midrashic perspective, this parallels something that is being done in secret without our knowledge.  For example, sin that is kept secret produces guilt, and the effects of guilt can change us. As a result, others are able to observe these changes in ones life.  Perhaps a spouse, for instance, is unaware of her husband’s addiction to pornography, but his addiction leads to a guilty secretiveness that leads to an attitude change toward her as his sexual partner. She perceives that change and speculates on the possible cause (he finds her unattractive, he doesn’t love her any more, or he’s having an affair?). While none of these things are true, the consequences of his “hidden” sin are potentially devastating to her, their marriage, and their family, his relationship with God, even if his secret is never discovered. What this example illustrates is the practice of sin is not the norm since it has an effect upon both us and upon others that leads to the destruction of relationships.  The concept of sin however goes even deeper than this because it has the ability to rob a person of his/her ability to understand truth. Take for example what Paul wrote in 1 Corinthians 2:9-12:

1 Corinthians 2:9-12
But, as it is written, What no eye has seen, nor ear heard, nor the human heart conceived, what God has prepared for those who love Him. These things God has revealed to us through the Spirit; for the Spirit searches everything, even the depths of God. For what human being knows what is truly human except the human spirit that is within? So also no one comprehends what is truly God’s except the Spirit of God. Now we have received not the spirit of the world, but the Spirit that is from God, so that we may understand the gifts bestowed on us by God.

What Paul is speaking about is the things God wants for our lives, what He reveals to us, and this world which causes us to not understand the will of God.  It is the Lord God Himself by His Spirit that helps us understand His will for our lives.  Without the Spirit of God in our lives we are unable to recognize sin and its effects (to live without God is to live in a Matrix type world of deception).  The greatest consequence to sin is to the death of our mortal soul.  From a Midrashic sense, things are illustrated in in the modulated electrical impulses causing the beetle to go in one direction or the other where his actions are outside of his control.  Though the beetle has the normal control of its wings in the sense that it takes care of the details, the implanted electrodes (just like sin) are what determine the direction it must go, to start flying, to turn left or right, or to hover in place.  If we are not set free from the effects of sin, the flesh (body) will take us to places and in the direction we do not want to go.  Paul spoke of this in the following way saying,

Romans 7:12-25
7:12 So then, the Law is holy, and the commandment is holy and righteous and good. 7:13 Therefore did that which is good become a cause of death for me? May it never be! Rather it was sin, in order that it might be shown to be sin by effecting my death through that which is good, so that through the commandment sin would become utterly sinful. 7:14 For we know that the Law is spiritual, but I am of flesh, sold into bondage to sin. 7:15 For what I am doing, I do not understand; for I am not practicing what I would like to do, but I am doing the very thing I hate. 7:16 But if I do the very thing I do not want to do I agree with the Law, confessing that the Law is good. 7:17 So now, no longer am I the one doing it, but sin which dwells in me. 7:18 For I know that nothing good dwells in me, that is, in my flesh; for the willing is present in me, but the doing of the good is not. 7:19 For the good that I want, I do not do, but I practice the very evil that I do not want. 7:20 But if I am doing the very thing I do not want, I am no longer the one doing it, but sin which dwells in me. 7:21 I find then the principle that evil is present in me, the one who wants to do good. 7:22 For I joyfully concur with the law of God in the inner man, 7:23 but I see a different law in the members of my body, waging war against the law of my mind and making me a prisoner of the law of sin which is in my members. 7:24 Wretched man that I am! Who will set me free from the body of this death? 7:25 Thanks be to God through Jesus Christ our Lord! So then, on the one hand I myself with my mind am serving the law of God, but on the other, with my flesh the law of sin. (NASB)

We are able to see a principle here that can be applied both positively and negatively. Paul spoke of sin as having the effect of causing him to do what he does not want to do (i.e. the wireless control of beetle flight).  In Romans 7 he speaks of four laws, he parallels the law of sin and death to the law of the body/flesh, and the law of God (Torah) to the law of the spirit and walking in the Spirit (see Romans 8).  He concludes Romans 7 with the power of God to deliver him from this way of sin and the body, by his faith in Yeshua the Messiah and by the power of God through His Spirit that dwells within, we are able to recognize sins effects and be successful in overcoming sin in our lives.  It is by these things we are set free from sin’s effects and are not controlled by it.  This is what it means as our having the desire to live to glorify God, and even though there are times when we can and do fail, God has made provision for us to be in fellowship with Him. He has promised that “If we confess our sins, he is faithful and just and will forgive us our sins and purify us from all unrighteousness” (1 John 1:9). If you do not know the Lord God of Israel, or His Messiah Yeshua, or what it is like to have His Spirit dwell within, then it might very well be the case that something is controlling you and you have not considered or know of the effects of sin.  In the case of the beetle, the electronics and the electrodes inserted into the body, and flight control, it most certainly knows that something is not quite right but something other than itself is controlling him.  In the case of the insect, he does not have the option to overcome this control because quite literally these things are inserted into his body.  We on the other hand do have a choice, to ask the the Lord God Almighty and His Messiah to set us free from sin. Seek, ask, pray, search God’s Word (the Bible) and invite the Messiah Yeshua into your heart, to be Lord of your life, and to help in overcoming sin, to turn from unrighteousness to His holy and righteous ways.  The Lord God knows about sin and what we are going through.  He wants you to ask for His help to overcome these things, whether private (hidden) or public, sin will destroy us.  The Lord God Almighty and His Messiah wants only the best for us. Invite Him into your life today!

Modeling COVID-19, How Fast Does a Virus Spread? – A Spiritual Insight

Parashat Emor, The importance of Sanctifying the Name of the Lord.

Tehillim / Psalms 43, Part 2, The Merit of our Fathers

Without the Lord there is no Hope, כי תשא פרשת,...