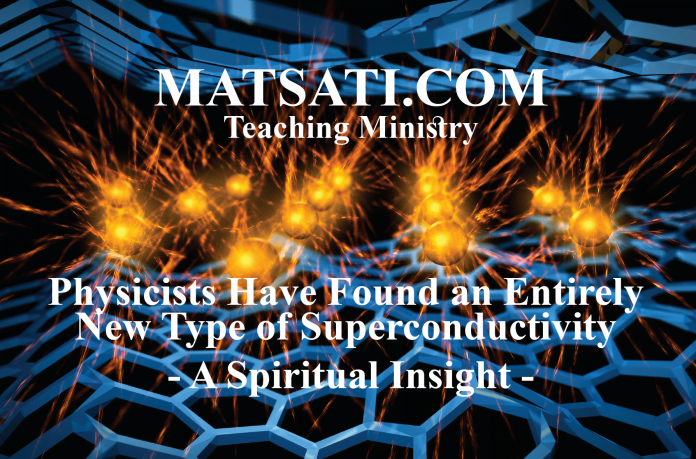 What happens in sending electricity through wires is the electrons conduct through the wire bumping into atoms in the material. As electrons bump into atoms some electrical loss occur, this is known as resistance. Lowering the temperature is currently the only way to decrease these electrical losses. Currently, this technology has many applications, one such use is to create strong magnetic fields in MRI machines and also maglev trains. In 2018 researchers at the University of Maryland observed a new type of superconductivity when probing an exotic material at super cool temperatures. [1]

There is a quantum property that is called “spin” that describes the way electrons interact where in regular superconductors, electrons carry a spin referred to as ½. The is a material composed of Yttrium, Platinum, and Bismuth (YPtBi) which have electrons that appear to have a spin of 3/2. It is known that “high spin states” in individual atoms are possible, but once you put the atoms together to form a bi-metallic conductor, these states usually break apart and end up with a spin of ½. Conventional theory states that YPtBi would need a thousand times more mobile electrons in order to become superconducting at very low temperatures. When researchers cooled down the material, superconductivity was observed to occur anyway. After running a series of measurements and calculations, the researchers concluded that the best explanation for what was going on was that the electrons must have been disguised as particles with higher spin – something that wasn’t even considered as a possibility for a superconductor before. These high spin state electrons is a brand new type of superconductivity that leaves many fundamental questions unanswered which makes this type of research very fascinating.

The spiritual insights we receive from the idea of superconductivity is related to resistance. This is related to how resistant we are as individuals, and how much the world resists us as the children of God. When we encounter God, He moves us from the place we are, he takes us from bondage into freedom, from sorrow into joy, from darkness into “ light,” from unrighteousness into righteousness, and calls us into holiness as He has made us a holy people. Notice how being a part of the world we are in bondage, there is great sorrow and darkness. The Lord God Almighty delivers us from being a part of this world in the sense that we no longer live our lives according to the ways of the world. This is the description that we receive from the Torah of the people who stood before the mountain of Sinai, having experienced the power of God in their lives. As a people who are redeemed, these things are accompanied by a warning as well. What we learn from the Torah is what the God of Israel is looking for in our lives. Are we seeking Him? Are we striving for His righteousness? Are we living our lives for Him? These questions reveal to us a major theme throughout the Torah in relation to our relationship with God and how God’s Word engages and interacts with our lives. These things are drawn out in the festival of Yom Kippur (Vayikra / Leviticus 16) for example. In the mercy of God, He has provided a way for the entire nation to receive atonement. Following this we read a warning to follow and obey God’s Word seeking Him at the place that He has established His name, however, we read in Vayikra / Leviticus 17:1–7 we are told some Israelites had been accustomed to sacrificing their offerings to “demons.” (לַשְּׂעִירִ֕ם) Based upon what we read in the Parashat Achari Mot, the Day of Atonement replaced this illegitimate practice of sacrificing upon a personal idol and the command was to bring all sacrifices to the entrance of the Tent of Meeting. These things are connected to our sins, and the goat designated for Azazel was sent out into the wilderness as a symbol of sending all of the sins of the people to where sin belongs, to the demonic realm. The idea is one goat was sacrificed to bring purification and access to God and one goat was sent to carry the people’s sins to the domain of demons. This annual ritual reinforced the identity of the One True God that is coupled to His mercy and holiness. In the Talmud Bavli Avodah Zarah 51b, the context of the rabbis discussion is related to the people sacrificing upon a personal or private altar. The rabbis describe a time when sacrificing upon a private altar was allowed up until the Tabernacle was erected and put into service. Moshe however pointed out some were sacrificing in error, possible reference to chet haegel (maybe) Moshe takes the sacrificing on personal idols to a higher level and speaks of sacrificing to demons by which the people had been led astray. (see Vayikra / Leviticus 17:7) Moshe’s statements of sacrificing to demons draws in the concept of avoda zara (idolatry, see Devarim / Deuteronomy 32:17 and 1 Corinthians 10:20). The Apostle Paul interpreted this as those who sacrifice to idols are doing so the demons.

There are many things we can learn from the concept of electrical resistance as we are studying the concept of electrical conductivity and superconductors. The spiritual application is in the sense once we become a part of the family of God, we are going to be met with resistance, not just from this world, but from the demonic realm. What we are being taught here in Parashat Achari Mot is to be careful not to offer sacrifices upon an altar of our own making (personal altars) because these are synonymous to sacrificing to demons. The reason this is so important for us today is related to what Ezekiel states in Ezekiel 14, how men set up idols in their hearts. Note the connection between avodah zara and sacrificing to demons. The idols that one may set up in one’s heart may be anything, from money, to pride, pornography, any kind of sexual immorality or lust, sports, all of these things and more are idols. If one sets up an idol in his heart he will not have fellowship with God. (Study the context of Ezekiel, the people sought a word from the Lord and the Lord God said He will only answer according to the idols they have placed in their hearts.) In the western culture, we do not struggle with idols made by men’s hands made of wood, stone, silver and gold. (There are cultures however that do, such as what we find in India.) David wrote in Tehillim / Psalms 115:1-9, the worshiper begins to resemble (to become like) that which he trusts in. As in ancient times, today men also struggle with the idols that are created in the heart. There is a great stumbling block that is rooted in the rebellious heart. This is the heart that is unwilling to submit to the will of God (His Word) but persists in wanting to walk according to his own ways. In the Torah, we are directed to trust and worship the one who is Faithful and true. This means that we are to trust in the One who is able to take away our sins, and drive the evil one into desolate places! The God we serve is powerful and mighty to save, He is the creator of all things! All of creation is subject to His lordship, and we are called to submit our lives to Him! These things reveal to us how important it is, according to the Torah, to walk in the way of God, and follow the leading of His Anointed One (the Messiah). As faithful followers of God we are chosen to submit ourselves to God’s authority and to His reign in our lives! When we study the Torah alongside of the scientific inquiry, notice how we are always drawn back to these things: humbleness, faith, prayer, and faithfulness in God and His anointed one. We are able to see God and His Word in His creation!  We should be able to see the power of God in our lives, and the power of the Messiah to drive out the evil one, to cast demons into the desolate places, and deliver men, women, and children from the power of the evil one. If we consider the spiritual implications of the scientific research, the evil one is set on keeping us bound up in our sins, and of no use to God and His kingdom. This is the significance of the Torah teaching about these things, specifically the significance of what we read in Vayikra / Leviticus 16-17 on Yom Kippur, personal altars, demons, and avodah zara (idol worship). The evil one wants to have access to our lives, each and every one of us. He wants to destroy our testimony, he wants to ruin our purity, he wants to defile our bodies, he wants us to set up idols in our hearts so we fall out of fellowship with God! If we allow ourselves to maintain an idol in our hearts, how much ground are we giving to the evil one to come and take up residence in our lives? Or to have an influence for deception?  In Yeshua the Messiah we are set free from this, however, if we are holding on to sin, we are setting up an idol and placing ourselves into bondage, and bowing down at the feet of whatever it is that takes precedence in our lives over the Lord God of Israel and Yeshua.  If we are doing these things, how much ground is being given to the demonic realm to influence our lives? This is a significant warning for us today according to Parashat Achari Mot! These are very significant issues that are very relevant for us today! We are called to resist these things, to draw near to God, and to walk in His ways, and to seek His help to overcome sin in our lives. The scientific research on superconductors draws out these Torah based concepts on the danger of idol worship. This is why the Torah is so important for us to study and why it is so important for us to place God’s Word and the words of the Messiah Yeshua upon our hearts, daily. Without the God of Israel and His anointed one, we are without hope in such are dark and desperate world that we live in.

Parashat Shemini, Let us Sanctify the Name of the Lord in...