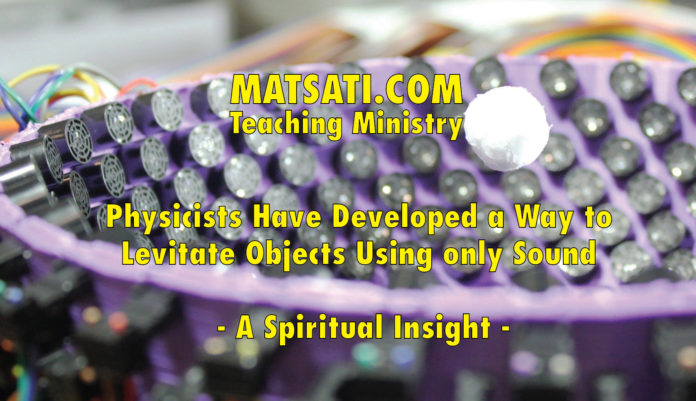 In a recent paper published in the Japanese Journal of Applied Physics [1] researchers reported on a method to Levitate Objects using sound waves. The paper reports the use of ultrasonic transducer arrays that were used to produce an upward force on an object using acoustic waves. The scientists used hemispherical arrays of acoustic transducers to create what they call a sound trap. In order to achieve lift of an object the transducers need to be tuned to create the correct sound field. If the surface reflects sound, this can complicate the sound field and make levitation more difficult.

The research paper reports manipulating millimeter sized objects (i.e. 3 mm diameter polystyrene spheres) and this has caused interest for biology and chemistry applications. Technologies that parallel the acoustic levitation are optical lasers which are also capable of trapping millimeter sized objects. The paper describes the acoustic levitation using Langevin-type transducers. A transducer is an analog device that converts electricity into a physical quantity, such as sound (i.e. speakers), pressure (i.e. sensors), or light (i.e. light bulbs) from an electrical signal, or vice versa. In this case, electrical signals can be converted into acoustic waves. The Langevin-type transducer is an ultrasonic transducer which was invented by P. Langevin from France. Note the power of these devices, Thorlabs offers Langevin transducers with integrated piezo ring chips designed for use in ultrasonic welding. Ultrasonic welding can be used for thermoplastic materials and is a welding technology utilizing mechanical vibrations to generate heat due to molecular friction. These vibrations excite the molecules in the plastic so that the plastic heats, gets soft, and melts and is capable of welding together via bonding by cohesive form-fit joints. In this research these Langevin-type transducers were arranged in a parabolic reflector wave-guide with four orthogonal ultrasonic transducer arrays.

Acoustic transducers for levitation function by producing pressure (force/area) using sound waves. This pressure has the potential to move particles and can be used to manipulate a wider range of materials on the scale of a few millimeters. There are some limitations to this technology. Anyone who has played around with magnets has tried to levitate magnets by pushing together two magnets with identical poles which repel each other. Any attempt at levitation resulted in the magnet falling to the side as there is a need to create a trap for the suspended magnet in order for it to remain in the magnetic field and maintain levitation. A similar situation occurs in the levitation using sound waves, therefore there was a need for a design to “trap” objects using sound waves, so that there is a neutral space where the object will remain suspended. Parabolic or hemispherical arrays of acoustic transducers were used by the scientists to create this ultrasonic trap in order to keep a polystyrene particle suspended via sound waves. The practical application of the Langevin-type transducers to levitate an object required controlling the transducer array in blocks as opposed to attempting to control the transducers individually. This made the tuning and control a lot simpler for producing the required acoustic field for levitation. The researchers succeeded in levitating polystyrene particles which has the application of manipulating tiny objects and presents a step forward in this technology.

The Spiritual insights that we receive from this type of research provides for us a sort of proof for what we read according to the Torah in the creation account. We note how the Scriptures speak of the power of God to speak his word and creation came into being. When we lay the scientific research down along side of the Scriptures, we find a practical application for the realization of God’s words having the power to manipulate matter. This is from the sense that words are formed by sound, and sound as is demonstrated in this research is capable of manipulating objects (matter). God used His word to create, this is how both Moshe in the Torah and the Apostle John describe the events of the creation! Note there is a significant difference here though, as God was able to create matter from nothing (יֵשׁ מאַיִן) as opposed to our current understanding for simply levitating objects.

Bereshit / Genesis 1:1-8
1:1 In the beginning God created the heavens and the earth. 1:2 The earth was formless and void, and darkness was over the surface of the deep, and the Spirit of God was moving over the surface of the waters. 1:3 Then God said, ‘Let there be light’; and there was light. 1:4 God saw that the light was good; and God separated the light from the darkness. 1:5 God called the light day, and the darkness He called night. And there was evening and there was morning, one day. 1:6 Then God said, ‘Let there be an expanse in the midst of the waters, and let it separate the waters from the waters.’ 1:7 God made the expanse, and separated the waters which were below the expanse from the waters which were above the expanse; and it was so. 1:8 God called the expanse heaven. And there was evening and there was morning, a second day. (NASB)

These verses describe the Power of God which is demonstrated in the power of His Word to create the universe יֵשׁ מאַיִן (yesh me’ayin, existence from nothing, Bereshit / Genesis 1:1). We note when the Lord speaks – He creates according to Bereshit / Genesis 1 and 2. There is a correlation between the word of God and His Power (His creative power). The first of His creation was light, the light of righteousness. This first of God’s creative work is connected not just to the character of God, but to that of His people as well! The fascinating aspect of this research is in man’s ability to manipulate (lift) matter using sound. Note the parallel accounts which Yeshua speaks about here from Matthew and Mark.

Matthew 21:21-22
21Jesus replied, “Truly I tell you, if you have faith and do not doubt, not only can you do what was done to the fig tree, but also you can say to this mountain, ‘Go, throw yourself into the sea,’ and it will be done. 22 If you believe, you will receive whatever you ask for in prayer.”

Mark 11:22-23
22 “Have faith in God,” Jesus answered. 23 “Truly I tell you, if anyone says to this mountain, ‘Go, throw yourself into the sea,’ and does not doubt in their heart but believes that what they say will happen, it will be done for them.

It could be said this is the power of the Word over Matter (sound over matter). This is exactly what we see going on in the scientific research using sound waves to move matter. Isn’t it is an interesting intellectual exercise to draw a parallel to this kind of technology and the power of God’s Holy Word? In addition, we also see how God’s Word has a transformational capability, being powerful to work miracles in the human body (i.e. parallels to biology, chemistry, physics) and working a powerful miracle of a transformed life, meaning that it affects our decision making processes. We note these very things are revealed to us according to the creation account, as the Lord continues His creative process, he states in Bereshit / Genesis 1:26 וַיֹּ֣אמֶר אֱלֹהִ֔ים נַֽעֲשֶׂ֥ה אָדָ֛ם בְּצַלְמֵ֖נוּ כִּדְמוּתֵ֑נוּ וְיִרְדּוּ֩ בִדְגַ֨ת הַיָּ֜ם וּבְע֣וֹף הַשָּׁמַ֗יִם וּבַבְּהֵמָה֙ וּבְכָל־הָאָ֔רֶץ וּבְכָל־הָרֶ֖מֶשׂ הָֽרֹמֵ֥שׂ עַל־הָאָֽרֶץ׃ “God said Let us make man (אָדָ֛ם) in our image (בְּצַלְמֵ֖נוּ) and in our likeness (כִּדְמוּתֵ֑נוּ)…” the text continues saying “and have dominion over fish in the sea, the birds of the heaven (air), the beasts of the field, and the creeping creatures in all the earth.” The significance of this statement is God saying נַֽעֲשֶׂ֥ה אָדָ֛ם בְּצַלְמֵ֖נוּ כִּדְמוּתֵ֑נוּ “let us make man in our image and likeness.” Notice how this is a process of manufacturing! This means there is a correlation between language and reality. This is God creating by the power of His word, and He has also giving us this ability to create our own reality in our minds and to a lesser extent by what we say in our lives. Granted we don’t literally create something from nothing by means of our words, we do however have the ability to evaluate our environment and make decisions, interpretations, and modify our world by our actions and then live it out. Remember, our words can lead to life or death! This ties back to the idea that the very first thing God did in creation, He created light and life connecting these things to one another. The light is analogous to the righteousness of God which shines forth and directly correlates to the creative word and how we live. This is why Jewish thought speaks to all of our actions being done for the sake of Heaven. These concepts draw us back to the creation and the power of God’s Word. Faith and faithfulness effects everything in life, whether eating, sleeping, doing business, or leisurely activities, everything we do can be done in service to God! This of course must be done with the proper כונה (kavanah, intentions). The Scriptures speak of this in the Torah, and Paul draws this out when he said in Colossians 3:23 Whatever you do, work at it with your whole being, for the Lord and not for men, 3:24 because you know that you will receive an inheritance from the Lord as your reward… (BSB) Note also how this relates to our relationship with God. Teshuvah (Repentance) is coupled to hearing the Word of God. The power of God’s Word is found in the transformation of one’s life! These things speak to us concerning how each of us is responsible for how we describe reality, what we believe, how we live that belief out, and whether our lives, the things that we do, align with God’s Word and the truth of God’s reality! In addition to these things, the Scriptures state that “if anyone is a hearer of the word and not a doer, he is like a man who looks intently at his natural face in a mirror. For he looks at himself and goes away and at once forgets what he was like.” (James 1:23-24) This is the concept of hearing the truth and not acting upon it, not living it out, we are likened to one who steps away and forgets who we are and why we were created (to bring glory to God).

The Apostle John describes the power of God’s Word in the following way:

What Existed before the Universe?

The gift of God that Enables us to Walk in Righteousness,...