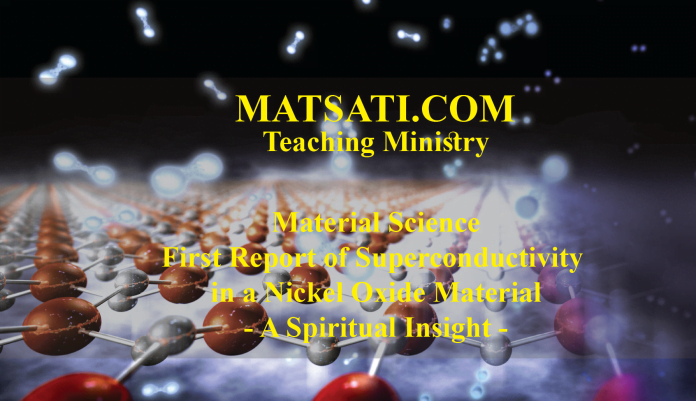 Research Scientists at the Department of Energy SLAC National Accelerator Laboratory and Stanford University have reported on the first Nickel oxide material that shows signs of superconductivity. [1] Materials can be divided into two categories based on their ability to conduct electricity. Metals, such as copper and silver, allow electrons to move freely and carry electrical charge. Insulators, such as rubber or wood, hold on to their electrons tightly and prevent electrical current to flow. In the early 20th century physicists developed new laboratory techniques to cool materials to temperatures near absolute zero (–273.15°C or –459.67°F), and began investigating how the ability to conduct electricity changes in such extreme conditions. In some simple elements such as mercury and lead they noticed something remarkable – below a certain temperature these materials could conduct electricity with no resistance. This means one could apply a very large current to a very thin wire and the wire would not burn up. This type of technology (room temperature superconductivity) has many applications and would be quite valuable leading to many types of technological advancements.

The research being conducted into room temperature superconductivity is leading researchers to investigate different materials. Nickelate is the first in a potentially new family of unconventional superconductors that are very similar to the copper oxides that were discovered back in 1986. The realization of these materials could revolutionize electronic devices, power transmission, and other technologies. Researchers started with a perovskite thin-film.

A perovskite is any material with the same type of crystal structure as calcium titanium oxide (CaTiO3), called the perovskite structure. Perovskites take their name from the mineral, which was first discovered in the Ural mountains of Russia by Gustav Rose in 1839 and is named after Russian mineralogist L. A. Perovski (1792–1856). The general chemical formula for perovskite compounds is ABX3, where ‘A’ and ‘B’ are two cations of very different sizes, and X is an anion that bonds to both. The ‘A’ atoms are larger than the ‘B’ atoms. The ideal cubic structure has the B cation in 6-fold coordination, surrounded by an octahedron of anions, and the A cation in 12-fold cuboctahedral coordination. The relative ion size requirements for stability of the cubic structure are quite stringent, so slight buckling and distortion can produce several lower-symmetry distorted versions, in which the coordination numbers of A cations, B cations or both are reduced.

The perovskite that was created by researchers was unique having a double-pyramid atomic structure that contains neodymium, nickel, and oxygen. The perovskite was then doped with strontium. Doping the neodymium-nickel perovskite with strontium led to the creation of vacant electron “holes” at the nickel atoms. This made the material unstable. The researchers struggled to create a thin film of this material taking a year to refine the crystal growth process. When the material was made, it was cut into pieces, wrapped in aluminum foil, and sealed in a test tube with a chemical to leach oxygen atoms from the surface of the perovskite layer. The removal of oxygen atoms led to a new atomic structure, a strontium doped nickelate. Testing revealed the nickelate perovskite material was superconducting in the temperature range of 9-15 kelvins, which is incredible cold. This however has led to a new material at an early stage of work that is quite fascinating. Further work will involve doping the material with different transition metals to see how this affects the superconductivity across the range of temperatures. In addition, further studies will be conducted to understand the materials magnetic structure and its relationship with superconductivity.

To Look for the One Whom Moshe Spoke About, פרשת שפטים,...

Type A blood converted to universal donor blood with help from...

Parashat Ekev, The Word of God and the true Bread from...

Tehillim / Psalms 78, Part 1B, Mashiach and the Torah