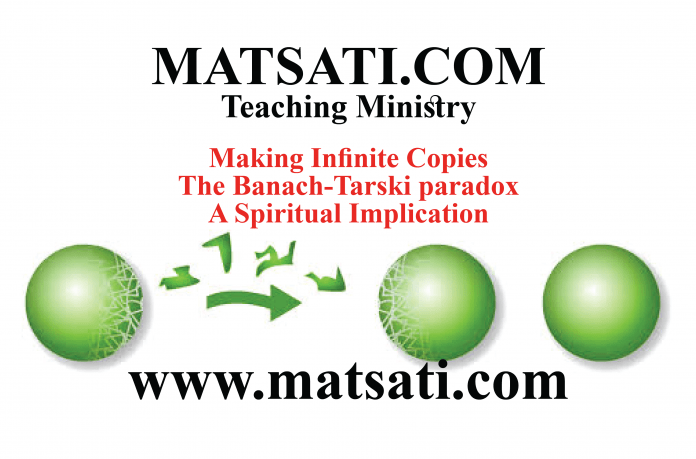 The Banach–Tarski paradox is a mathematical theorem in set-theory.  This theorem states “Given a solid ball in 3‑dimensional space, there exists a decomposition of the ball into a finite number of disjoint subsets, which can then be put back together in a different way to yield two identical copies of the original ball.” The idea is if one is able to divide a ball into an infinite number of pieces, it is possible to disassemble and then reassemble the pieces (moving the pieces around without changing the shape) to form two identical balls.  The pieces themselves are not “solids” in a sense, but infinite scatterings of pieces. The published paper may be found with this reference (Banach, Stefan; Tarski, Alfred (1924). “Sur la décomposition des ensembles de points en parties respectivement congruentes” Fundamenta Mathematicae 6: 244–277).  The reason the Banach-Tarski theorem is called a paradox is that it contradicts the basic intuition of geometry.  For example, dividing the ball into parts, moving them around by rotations and translations without changing the pieces (stretching, bending, or adding new points) to form two new balls seems to be impossible, since all of these operations by intuition don’t seem to preserve the volume.  The mathematical proof of this theorem depends upon the set of axioms (assumptions) going into the set theory.  It can be proven using the axiom of choice, but allows for the construction of non-measurable sets which requires an infinite number of points, an uncountable number of choices.  The more formal simplified definition of the Banach–Tarski paradox, it is possible to obtain k copies of a ball in the Euclidean n-space from one, for any integers n ≥ 3 and k ≥ 1, i.e. a ball can be cut into k pieces so that each of them is equidecomposable to a ball of the same size as the original.

So what are the spiritual implications that we can draw from this mathematical theorem?  When we consider something that resembles the original but is actually a copy, it looks like the original.  What does this sound like?  Something that appears right to man but the end thereof leads to death?  (Mishley / Proverbs 14:12) Deception? The influence of deception in our lives encompasses a variety of methodologies.  I discussed a few of these methodologies in the article https://www.matsati.com/index.php/what-are-the-consequences-of-not-having-a-biblical-world-view/ Most of us go through life not recognizing that our personal worldviews have been deeply affected through media and other influences. The secularized worldview of history, law, politics, science, God and man affect our thinking more than we realize. This is what the Apostle Paul meant when he said that the Colossians have been “taken captive through philosophy and empty deception, according to the tradition of men, according to the elementary principles of the world, rather than according to Christ.” (Colossians 2:8)  This example among hundreds or thousands of others illustrates how history is marked by those who, in different ways, have influenced people away from God and damaged, even destroyed, their lives. This is why we are called to diligently study God’s Word to apply and trust in God’s truth in every area of our lives. This reveals to us the power of spiritual deception and why the Tanach and the Apostolic Writings repeated warn us about those who seek to deceive us spiritually.
In the Sermon on the Mount, Yeshua warns us about false prophets.  Yeshua warns that they will come to us in sheep’s clothing.  Paul wrote that they “masquerade as servants of righteousness.”  (2 Corinthians 11:15)  They generally come with the world’s wisdom, they are winsome, and they seem sincere giving religious seminars, teaching courses on religion, in both university and at seminary. Yeshua states they come in sheep’s clothing, but inwardly they’re ferocious wolves. Here he draws upon the comparison that wolves are the natural enemies of sheep. Isaiah states 8:19 When they say to you, ‘Consult the mediums and the spiritualists who whisper and mutter,’ should not a people consult their God? Should they consult the dead on behalf of the living? (NASB) Isaiah also says 19:3 ‘Then the spirit of the Egyptians will be demoralized within them; And I will confound their strategy, So that they will resort to idols and ghosts of the dead And to mediums and spiritualists. (NASB) Something important to note here is Isaiah’s reference to the spirit within the Egyptians.  This suggests there is a spiritual influence on the actions of the Egyptians, and that God will confound this spirit within them and connects this to their seeking idols and consulting the dead. (The spirit within them may alternatively refer to their own spirit.) Jeremiah states 27:9 ‘But as for you, do not listen to your prophets, your diviners, your dreamers, your soothsayers or your sorcerers who speak to you, saying, ‘You will not serve the king of Babylon.’ (NASB) Here Jeremiah is describing people who claim to be hearing from the God of Israel, but are self deceiving themselves.  The Apostle John wrote in 1 John 4:1 Beloved, do not believe every spirit, but test the spirits to see whether they are from God, because many false prophets have gone out into the world. 4:2 By this you know the Spirit of God: every spirit that confesses that Jesus Christ has come in the flesh is from God; 4:3 and every spirit that does not confess Jesus is not from God; this is the spirit of the antichrist, of which you have heard that it is coming, and now it is already in the world. (NASB)  These things teach us that evil spirits are trying to deceive us and are behind the control and deception that is capable of leading one astray.  The subtlety of deception through media, news, and the mass of online information is why we are told in the Scriptures to drive away the evil influences, the “casting down of imaginations” and “evil seducing thoughts” that lead us to walk away from God’s ways. Consider what we read in Hebrews 4:12-13:

Hebrews 4:12-13
4:12 For the word of God is living and active and sharper than any two-edged sword, and piercing as far as the division of soul and spirit, of both joints and marrow, and able to judge the thoughts and intentions of the heart. (NASB)

This teaches us about the power of God’s Word and the significance of our words.  Here the author of Hebrews speaks of God’s word being capable of discerning the intentions of the heart.  Our words have the capability of destroying, deceiving, or telling the truth (proclaiming the Word of God).  The spirit of the antichrist described by the Apostle John parallels this mathematical theorem (Banach–Tarski paradox) where the deception functions as a copy of the truth, where untruths are incorporated into the copy.  This provides us with a semblance of the original, but only looks like the original because it is a deception. The prophet Isaiah and Jeremiah teach us if one allows the hidden lusts and desire to control us leading the flesh and the soul (נפש Nefesh: mind, will, and emotions), doing so may lead a person to believe God’s Spirit is leading them when it is not.  This same deceiving power is present in false doctrines (false theologies), cults of every kind, Satanism, New-Age, Eastern Religions, etc. In the end, it is our decision to seek the Lord God of Israel and to study His Torah (all of God’s Word) which not just leads us to righteous and holy actions but also reveals what we truly believe, and where our faith and allegiances lay. (What the author of Hebrews 4:12-13 is trying to say.) These things begin by believing that God exists and believing in His Messiah Yeshua, that he died for our sins.  The Lord then comes to dwell in our hearts as we invite Him into our lives, and as we open the Scriptures and begin reading and studying His Word, the Lord helps us, empowers us to overcome sin and to live for Him.  By His Spirit we also know the truth and are resistant to deception.  We are empowered to be able to recognize a false copy, and discern the original so as not to be deceived!  This is the power of God in our lives!

Bits of Torah Truths, Parashat Shemot, What’s in a Name?