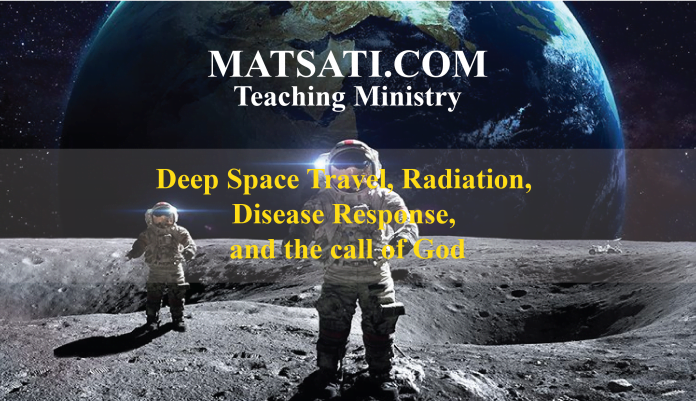 A recently published article titled “Space radiation triggers persistent stress response, increases senescent signaling, and decreases cell migration in mouse intestine,” Santosh Kumar, et. al., https://doi.org/10.1073/pnas.1807522115, reports on a study to understand how deep space missions will effect the human body if men and women were sent on a trip to the planet Mars.  Researchers are worried about galactic cosmic radiation and its effects on the human body.  Galactic cosmic radiation contains heavy ions such as iron and silicon which have the potential to cause greater damage due to their higher mass as compared to no-mass protons such as x-rays and gamma-rays which are prevalent on Earth.  The current shielding technologies are not able to protect astronauts from the adverse effects of heavy ion radiation.  Short trips like those taking people to the moon may not expose a person to the level of damage as for someone traveling to Mars.  The real concern is the long-term effects due to extended trips (the time it would take to travel to Mars) or other deep space missions which might be longer.  One such problem area in the human body is the gastrointestinal (GI) tract or the impairment to brain tissue, as well as accelerated aging due to long space trips and the bombardment of these heavy ions.

To investigate the effect of heavy ions on the GI tract, scientists used mouse small intestines as a model system.  In the study, mice were exposed to low doses of heavy ion radiation to ascertain the effect of this type of radiation on the intestinal tract.  Now the GI tract is a self-renewing tissue with continuous cell division and proliferation.  The mucosal (top) layer of the cells are replaced every three to five days through the migration of new cells from the bottom upward.  The question is whether the heavy ion radiation will interrupt this replacement mechanism that leads to disease or some other type of GI problems (i.e. problems with nutrient adsorption, pathogenic pathways to cancer, etc).  The researchers compared the heavy ion test cases to others exposed only to x-ray radiation and an unexposed control group.  The study revealed that the intestinal cells in the heavy ion group did not adequately adsorb nutrients and formed cancerous polyps.  In addition, the heavy ion radiation also damaged DNA increasing the number of senescent cells that are incapable of normal cell division.  The heavy radiation also generated oxidative stress and inflammation causing more damage to the intestinal tract.  The dosage rate was a low dosage compared to what will occur in outer space, was delivered over the equivalent amount of time to those traveling to Mars, resulted in permanent damage to the intestinal tract.

It is interesting and fascinating to study the unique properties of these planets in comparison to Earth.  The Earth remains the only known planet to host life due to a unique combination of factors.  The Scriptures declare that “God … formed the earth … to be inhabited.” (Isaiah 45:18)  An impartial study of the Earth readily provides evidence that there is a tremendous amount of meaning behind this single verse from the Scriptures.

Isaiah 45:18
45:18 For thus says the Lord, who created the heavens (He is the God who formed the earth and made it, He established it and did not create it a waste place, but formed it to be inhabited), ‘I am the Lord, and there is none else. (NASB, יח   כִּי-כֹה אָמַר-יְהֹוָה בּוֹרֵא הַשָּׁמַיִם הוּא הָאֱלֹהִים יֹצֵר הָאָרֶץ וְעֹשָֹהּ הוּא כוֹנְנָהּ לֹא-תֹהוּ בְרָאָהּ לָשֶׁבֶת יְצָרָהּ אֲנִי יְהֹוָה וְאֵין עוֹד:)

A brief examination of the planets that we do know about we find some major and startling contrasts.  The Earth consists mostly of iron, oxygen, sulfur, silicon, magnesium, and nickel (total, 98%), with the other two percent consisting of about a hundred other elements.  The Earth is Like no other planet, covered with green vegetation, blue-green seas, streams, rivers, mountains, and deserts which produce a spectacular variety of color and texture, vegetation, whereas all the other known planets are covered with lifeless soil which varies only according to slight movements made by wind or mild air currents.  The Earth is the only planet with huge bodies of water with approximately 70% of its surface area covered in oceans, lakes, and seas surrounding huge bodies of land.  The few planets that have water contain only moisture floating as vapor on their surface, not large bodies of liquid water as is found on the Earth.  These things lead us to the conclusion that the Earth is special along with humanity who was specially created by God and placed upon this Earth.  Our conclusions based upon the Scientific evidence is on the side of the uniqueness of this planet and its people.  If we consider these things to be true, then ultimately, we should make it our life goal to get to know the God who created all that we know.

We learn about the Lord God Almighty, in His great power to create all that we know, in the book of Genesis the first and second chapters.  We learn that the Lord God spoke the world into existence.  He spoke, and the word went forward and creation bursts forth, light, the heavens, the earth, the plants, the sun and moon, and all of the creatures that fly, swim and walk on land.  The Lord God Separated the light and dark, the day and night, the sky and the earth, and the water and land.  Man’s creation however was different.  The Lord honored humanity by creating us in His own image and likeness, male and female.  The historical account of the creation of man is expanded in Bereshit / Genesis 2, as God formed the man from the dust of the earth and breathed the breath of life into him.  He then fashioned the woman from the man’s rib taking a part of the man and giving it to the woman symbolizing the two becoming one together.  Both man and woman were created distinct and valuable, and both reflect the image and likeness of God.  From these things we learn how God designed us for union with Him and with others.  We learn how our bodies have been created by God and are good.  We learn how our bodies reveal deep truths about the meaning of life in the application of God’s mitzvot (commands) to our lives.  We also learn that through our bodies, we make visible the love of God to all the world.

This is the point of the Scriptural imperative to have faith, to believe that God exists, that He loves us, that He created us to be unique, and to believe in His Son Yeshua (Jesus) the Messiah.  These things are more than just a way of thinking.  Our faith is rooted in the Messiah and in God’s Word (in His Torah / in His Instruction).  Our faith has movement, it has form, and it has meaning. It is active and powerful to bring about the transformation of conduct in the sense that we show the love of God to others by the way we live.  The prophet Habakkuk said, “but the righteous will live by his faith” (Habakkuk 2:4). We are to live by faith, meaning we are putting our faith into action.  Living a life of faithfulness is a dynamic experience. It is the power of God to live for Him in obedience to His word. This is true redemption and salvation because it embraces the new life of walking in the way of God’s Torah, following in the footsteps of the Messiah (following Jesus)! As a path to salvation, the way of righteousness is experienced as a present-day reality that is achieved by the Lord God Almighty, by His Spirit, effectively empowering us to live for Him!  The Torah speaks of the “life of righteousness” (the way of righteous living) where our faith is lived out in the way of righteousness as we believe in the Messiah and receive empowerment in our lives from God to overcome sin, to bear God’s testimonies, and to bring glory to His Name!  We were placed here by a powerful God who desperately wants us to pay attention, because He has something to tell us.  What we learn here from these Scientific investigations, in man’s attempts to do what was at one time impossible (i.e. going to another planet), we learn how we were uniquely created, and the place of our residence was uniquely designed for us so that we can live and thrive!  This doesn’t mean that we should not reach for the stars in our never-ending quest for scientific achievement.  This teaches us however to reach beyond the stars, to the One who created the stars!  The Lord God Almighty is calling out to us because He loves us and wants us to draw near to Him by Faith in His Messiah according to His Word.  If these things ring true to your heart, call upon the Name of the Lord today!  Ask Him to come into your life, into your heart, to be Lord and Savior, and to transform you and to create in you something new!

Dr Duane Miller – Emptiness, Depression, great sorrow and what to...

Parashat Bo, Are you beginning to resemble what you are worshiping?