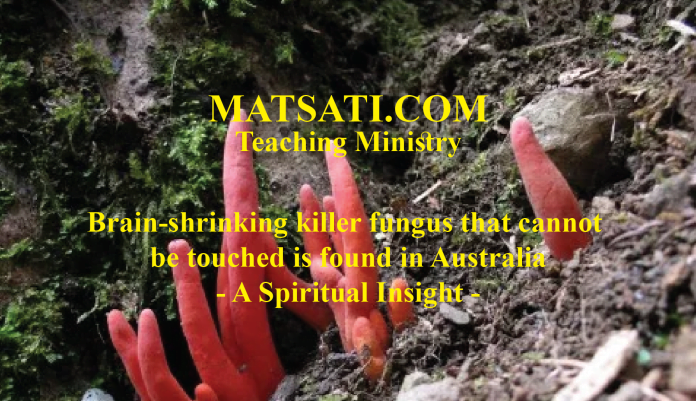 Recently it has been reported there is a fungus called “Poison Fire Coral” which has toxins that can be absorbed through the skin and can cause a person’s brain to shrink and lead to multiple organ failure. This fungus was discovered in Cairns Australia and scientists warn that it may be growing wild across Australia’s tropical north. Several people have died in Japan and Korea after harvesting the fungus, mistaking the bright red fungi for edible mushrooms used in traditional medicine. They brewed the fungi in water to make a tea. The symptoms of eating this fungus is as follows:

“Just touching the Fire Coral fungus can cause dermatitis. If eaten, it causes a horrifying array of symptoms: initially stomach pain, vomiting, diarrhea, fever and numbness, followed over hours or days by delamination of skin on face, hands and feet, and shrinking of the brain, which, in turn, causes altered perception, motion difficulties and speech impediments.”

Based on this description, this is an awful way to die because if this is left untreated, multiple organ failure will occur and cause a person’s brain to shrink leading to death.

The Spiritual insights that we receive from this type of thing is related to being curious about sin, to touch, and to ingest (bringing sin into our lives) leads to death. A recent study from the Harvard School of Public Health (HSPH) found that viewing more than two hours of TV daily was linked to an increased risk of type 2 diabetes and heart disease, and more than three hours of daily viewing increased the risk of premature death. [1] When we consider the scientific research on topics such as watching television for extended periods of time, scientists are finding links to health related diseases. There is a clear warning we are receiving here, the message is simple, cut back on the amount of time watching television can significantly affect our health for the better (i.e. reduce premature mortality rates). Many people around the world divide their days between working, sleeping, and watching television. It is reported that Eurpoeans spend on average 40% of their daily free time in front of the television set. Australians spend 50%. This corresponds to three to four hours of viewing time. This leads to reduced physical activity levels and an increase in unhealthy diets of processed foods. The most likely reason people spend so much time watching television and movies is to escape from their everyday problems, seek pleasure, and connect to the world in search for information and experiences. One of the less talked about the effects of television, is in its contribution to a false sense of reality. Television has the ability to distort reality through false information or omission of facts or truth. Television programming also undermines moral standards through depictions of or allusions to sex, and sexual contact. Violence on television also has the capacity to desensitize and instigate violence in everyday behavior. In addition, profanity and slander may also have significant effect upon the viewer. It should be obvious the spiritual consequences to these things, especially when one spends a significant amount of time, 40-50% watching television programming. The danger is by being entertained by these things, a person is joining his or herself with some very ungodly principles, some of which we are warned against according to the Torah.

One of the most significant problems with watching too much television is that it can hinder one’s ability to think. What occurs is by watching television, one receives a continuous flow of thoughts, information, quick ideas, opinions, analysis, and criticisms for just about everything. This leads to a slow process of losing our own ability to think critically. This is due in part to televisions ability to misinform and manipulate the truth. Because of this, television has had a huge influence upon our culture and society as a whole. And, because of this, television is extremely detrimental to the spiritual health of people everywhere. Because television can potentially be so spiritually potent in a negative way, it has become a major stumbling block for multitudes of God’s people leading to sin and ultimately to shipwreck their faith. Knowing the truth and drawing near to God are so important, and television draws us away from doing what is most important. Solomon wrote the following according to Mishley / Proverbs 9:1-4 on the importance of having wisdom.

Solomon personifies wisdom. This is a very important observation. Wisdom, based upon the Concise Oxfords thesaurus, is synonymous with “intelligence, sense, common sense, shrewdness, astuteness, smartness, judiciousness, judgment, prudence, circumspection; logic, rationale, rationality, soundness, advisability.” Solomon says Wisdom has mixed “her” drink and prepared her food. She has prepared the table and calls to us to eat and drink of what she has made. This is a significant point because when one makes wisdom a part of his or her life, he gains intelligence, common sense, and rationality. Wisdom is described as nurturing, causing growth spiritually, and for understanding about this world and its devices, deceptions, and teaches us to avoid sin. If this is true, then what may be said of that which comes through the television, idolatry, immorality, sexual perversions, lies, covetousness, murders, and witchcraft? Could these things which lead to sin be personified in a similar way as wisdom? Watching sexual perversions on television, to be entertained by them, causes one to sup at the table of immorality and disobedience. This is why Solomon describes wisdom as being precious (Mishley / Proverbs 2:1-10), being of the greatest value, and beautiful. Today, most mainstream television is both spiritually and morally toxic. When we consider television as a mode for communication, when one sits in front of the television, it is working on our minds, sending thoughts, ideas, and godlessness into the mind. Take for example, the godless producers and script writers cause God’s people to accept things that were not previously accepted in the history of entertainment. For example, a lot has been done concerning the homosexual agenda through television and movies to cause our culture to accept this as a normal lifestyle. Adulterous behavior is considered normal by television standards, where the commandments of God are ignored or ridiculed often very subtly. This has an effect upon the mind and one’s spiritual state. What exactly are the spiritual dangers of watching television today? Read what Paul wrote in Galatians 5:19-21.

Galatians 5:19-21
“Now the works of the flesh are evident, which are: adultery, fornication, uncleanness, lewdness, idolatry, sorcery, hatred, contentions, jealousies, outbursts of wrath, selfish ambitions, dissensions, heresies, envy, murders, drunkenness, revelries, and the like; of which I tell you beforehand, just as I also told you in time past, that those who practice such things will not inherit the kingdom of God.”

Tehillim / Psalms 35, Part 2, Trusting in the Righteousness of...

Parashat Behar: What is up with the Year of Jubilee?