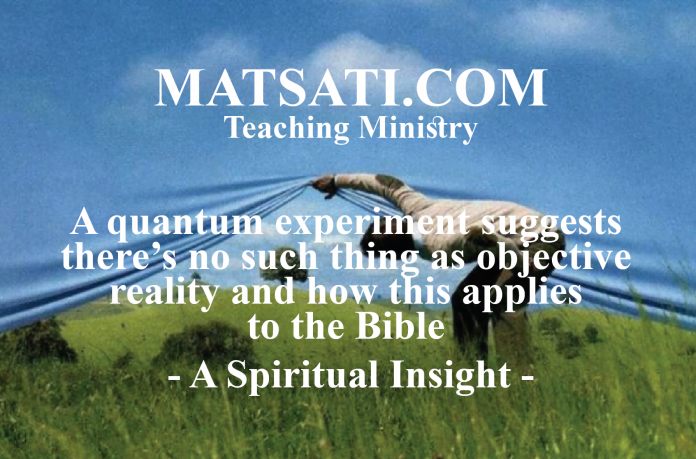 In the abstract of this paper the researchers state the following, “While observer-independence has long remained inaccessible to empirical investigation, recent no-go-theorems construct an extended Wigner’s friend scenario with four entangled observers that allows us to put it to the test.” [1]  These researchers used modern quantum technologies to develop a state-of-the-art 6-photon experiment that tests Wigner’s friend scenario experimentally.  Based upon the measured data, the researchers have concluded that their experiment has created different realities. Comparison of these realities show Wigner as being correct, the realities can be made irreconcilable so that it is impossible to agree on objective facts about an experiment. This may be the idea behind quantum entanglement and unhackable communications networks.

Wigner’s original thought experiment is straightforward in principle. It begins with a single polarized photon that, when measured, can have either a horizontal polarization or a vertical polarization. But before the measurement, according to the laws of quantum mechanics, the photon exists in both polarization states at the same time, a property that is known as superposition. The thought experiment stated that a friend (in close or local proximity) measured the state of this photon and stored the result while another observer measured the state of the photon at a greater distance.  Since we do not know the second friend’s measurement technique, one is forced to make the assumption that the photon and the measurement of it are in a superposition of all possible outcomes of the experiment. It is also possible to run an experiment to determine whether the superposition exists or not using an interference experiment showing the photon and the measurement are in a superposition.  The experiment that proves a superposition exists suggests that the measurement cannot have taken place, however, the closer friend has indeed measured and recorded its polarization state.  This states that the two realities are at odds with each other.  This calls into question the objective status of the facts established by the two observers. With this thought experiment, researches used six entangled photons to create two alternate realities where one represents each of these observers.  One reads the polarization of the photon while the other performs the interference measurement to determine if the measurement and photon are in a superposition. The experiment produced the result that both realities can coexist and produce irreconcilable outcomes just as Wigner predicted.  This raises some fascinating questions and causing physicists to reconsider the nature of reality.  In the applied sciences, the idea that experimental measurements are reproducible is based upon certain assumptions.  The idea that observers can ultimately reconcile their measurements of some kind of fundamental reality is based on several assumptions. The first is that universal facts actually exist and that observers can be agree on them. There is something physicists call locality, the principle of locality states that an object is directly influenced only by its immediate surroundings. A theory which includes the principle of locality is said to be a “local theory.” This means that observers have the freedom to make whatever observations they want and the choices one observer makes do not influence the choices the other observers make. There is an objective reality that everyone can agree on where the assumptions all hold. In the quantum world however, this may not always be true.

The Spiritual insight that we receive from this scientific research on objective reality may be related to how we study God’s Word effects objective reality. Professor Rob Starner, Ph.D. at Southwestern Assemblies of God University (SAGU) states seven reasons it is important to study the bible in the original languages:

The underlying idea behind these seven points is the inspiration of Scripture has always been restricted to the original Hebrew, Greek, and Aramaic manuscripts that were penned directly by the biblical writers and not to copies or translations.  Reading a translation is like reading through a distorted window that was polished by the translator.  The text of primary concern should be that of the grammar of the original language and not the English translation.  The grammar supports the text and English readers frequently miss the underlying nuances of the text and those things with which the translators have rejected.  Certain passages may have many underlying meanings (an example will be given shortly).  Some translators will provide footnotes on the reasons why they translated what they did, but the problem arises when for example the KJV differs from the NIV translation, how does one sort out the differences?  Does one use a gut feeling?  The Holy Spirit whoosh? The Urim and Thummim? The point is bible readers need a knowledge of the biblical languages in order to sort out the differences and to understand the underlying meaning which ultimately leads to truth!

Take for example the opening verses in Parashat Tzav (Vayikra / Leviticus 6:1-2).  Here we look at the Masoretic Text from Ginsburg’s Bible on Vayikra / Leviticus 6:2.  The Lord is telling Moshe to instruct Aaron and his sons on the whole burnt offering.  While reading the text, we see a rabbinic typesetting mark where the mem (מ) is smaller than the rest of the text.  The Marginal Mesorah notes this this is a small (זעירא) letter in the manuscript drawing our attention to this word and this verse suggesting there may be a greater underlying meaning that we should consider.

Jastrow’s dictionary says that זעירא means “young or youthful” in agreement with the letter being smaller.  Notice how this is the Torat (תורת, instruction) on the whole burnt offering (העולה) on the “fire” (מוקדה) on the altar (המזבח) and the instruction is to keep the fire burning all night long. The question is why did the rabbis mark this mem (מ) smaller in this particular place?  What is the underlying message the rabbis are trying to emphasize?  Was there a certain emphasis that is being placed upon the fire that is to be kept lit all night long?  Maybe this has something to do with the fire “waning” at night and it must be kept youthful (adding wood to keep it going all night)? Could this refer to us, in a world filled with darkness (unrighteousness), we have to keep the fire burning within (light within, God’s righteousness) by remaining in His Word?  Another interesting feature about this verse is concerning the whole burnt offering and the overnight fire, we can factually say this verse is concerning the olat tamid sacrifice (the lamb of God sacrifice, first and last offerings of the day, Shemot / Exodus 29:38-42, Bamidbar / Numbers 28:3-8). The underlying meaning for us may be that in this present age that is filled with darkness (wickedness), we are to hold fast to Yeshua abiding in Him and in the Word of God in order to keep the fire within going! Holding onto Yeshua, the lamb of God, keeps our fire going, remaining true to God’s Word, believing upon and living, ordering our lives according to God’s Word, etc.  All of these things are consistent with the biblical mandate God calls His people to abide in His Word and in His Son (both in faith and faithfulness).  This interpretation draws out specifically the rhetorical features of the biblical text as it is related to the original languages (Hebrew), such as alliteration, assonance, poetic structure, chiasm, marked/unmarked word order, typesetting, and the like, most of which are completely lost in translation, but all of which are clearly discernable to those schooled in the Biblical languages. Grappling with texts in their original Biblical languages causes us many times to reconsider our preconceived notions (presuppositions) about the meaning of these texts and causes a fall back upon a system of checks and balances related to the various translations that are in circulation today. The scientific research in quantum mechanics speaks of no such thing as objective reality by two separate observers.  When we take only an English biblical translation, or even a paraphrased bible, this causes one to loose his objective reality on the truth to varying degrees and this is in many ways exactly what is going on in the scientific research in quantum mechanics described above.  Take for example, congregations today put their trust (often a blind trust) in their spiritual leaders. This makes preachers and teachers of God’s word all the more responsible for rightly dividing the Word of God.  Paul wrote to Timothy saying, 2 Timothy 2:15, “Study to shew thyself approved unto God, a workman that needeth not to be ashamed, rightly dividing the word of truth.” (KJV) Studying in the original languages is an absolute must in this present evil age!  I encourage everyone to begin the process of learning Hebrew and Greek.  The reason is, no matter what level you may be, you are beginning the process of critically thinking about the Word of God which ultimately is for the purpose of putting God’s Word into practice for His glory!

Parashat Pinchas, Our Tent, Our Bodies, and Sexual Sin.