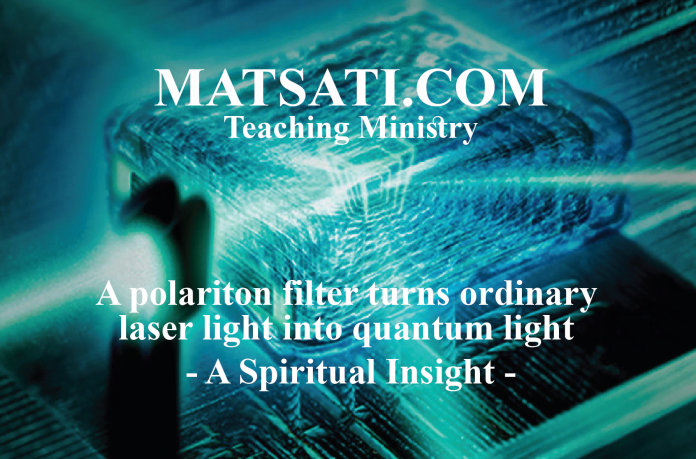 The quantum theory of light states “there is a Wave-Particle Duality of Light. Quantum theory tells us that both light and matter consists of tiny particles which have wavelike properties associated with them. Light is composed of particles called photons, and matter is composed of particles called electrons, protons, neutrons.” Therefore, the idea that is provided in the title of this article on turning laser light into quantum light seems to be a bit strange. The reason being, the definition of light requires quantum theoretical language. The news on an international team of researchers from Macquarie University converting ordinary laser light into genuine quantum light is and interesting one. The approach the researchers used was to develop thin-films only nanometers thick made from gallium arsenide (semiconductor material) that is mounted between two mirrors to modify the photons that are entering the device. In solid-state physics of semiconductors, carrier generation and carrier recombination are processes by which mobile charge carriers (electrons and electron holes) are created and eliminated. Carrier generation and recombination processes are fundamental to the operation of many optoelectronic semiconductor devices, such as photodiodes, light-emitting diodes and laser diodes and are also the fundamental concept in the area of research known as photo-catalysis. These electron-hole concept are also critical to the analysis of p-n junction devices such as bipolar junction transistors and p-n junction diodes that make microchip technology possible, power supplies, electronic timers and switching devices in our computers. The electron-hole pair is the fundamental unit of generation and recombination, corresponding to an electron transitioning between the valence band and the conduction band of the semiconductor material where generation of electrons is a transition from the valence band to the conduction band and recombination leads to the reverse transition. This is the context of what is happening when researchers shined a laser into this gallium arsenide device, the photons interact with the electron-hole pairs in the semiconductor forming new chimeric particles called polaritons that carry properties from both the photons and the electron-hole pairs. The polaritons decay after a few picoseconds, and the photons they release exhibit distinct quantum signatures. This research opens up a new field for producing single photons on demand. The researchers said, “The ability to produce single photons on demand is hugely important for future applications in quantum communication and optical quantum information processing,” says Associate Professor Thomas Volz from the Department of Physics and Astronomy and the senior author on the paper. “Think unbreakable encryption, super-fast computers, more efficient computer chips or even optical transistors with minimal power consumption.” Currently, single photon emitters are created in the applied sciences by assembling semiconductor materials in such a way that the quantum behavior is built in. This approach has limitations at very small scales as single photon emitters manufacturing is extremely challenging. This new approach will lend itself to significantly scaling up the technology increasing the strength of the quantum signatures that are being produced. This research paper describes a major milestone for the polariton community in which polaritons interact so strongly that they can imprint quantum signatures on photons. This has not yet been realized (been observed to date) however this opens up a whole new playground for researchers in the field. In the applied sciences, this technology would be used in quantum encryption algorithms (network security).

The Spiritual insights that we receive from this research is to the essence of light, the photon, being used for a particular purpose of imprinting quantum signatures upon photons. When we read this verse from Parashat Behar, Vayikra / Leviticus 26:2, אֶת־שַׁבְּתֹתַ֣י תִּשְׁמֹ֔רוּ וּמִקְדָּשִׁ֖י תִּירָ֑אוּ אֲנִ֖י יְהוָֽה 26:2 ‘You shall keep My sabbaths and reverence My sanctuary; I am the Lord. (NASB) coupled to the polariton research, we ask ourselves, what is the essence (the fundamental principle) of the shabbat? The sabbath day rest is what most people, when reading that passage, think about. In Bereshit / Genesis 2:2-3 we read “On the seventh day God finished the work… and ceased from all the work … and God blessed the seventh day and declared it holy, because on it God ceased from all the work of creation…” The Lord God ceased from all His work on the seventh day. What God created on the seventh day, the ancient rabbis tell us, was rest. When we consider the ten commandments, the Sabbath day was the only day of observance mentioned. In Shemot / Exodus 20:8 the mitzvah of shabbat is given as a “remember” (zachor) “remember the Sabbath day and keep it holy” whereas in the repetition of the ten commandments we are told to “observe” (shamor) the Sabbath day (Devarim / Deuteronomy 5:12). The Sages according to the Mechilta on Shemot / Exodus 20:8 state “shamor” and “zachor” were said in one utterance to emphasize the two principal aspects of the Shabbat. The Mekhilta states “Shamor” refers to the negative commandments, all the things that we are not allowed to do on Shabbat in order preserve it’s sanctity; “Zachor” refers to the positive aspects of Shabbat, those things we are supposed to do to honor the Shabbat. “Zachor” and “Shamor” also refer to the physical and spiritual aspects of Shabbat, respectively. The Zohar II 205b states the shabbat is a taste of the World to Come, a day of the Neshama, not a day of the body at all. The Sages understood performing the mitzvot (commandments) is the explicit purpose of the physical body. The Sabbath though, carries with it no specific physical mitzvot, and the Torah asks us to do only one positive Shabbat mitzvah, “to sanctify it.” The idea then, the very essence of the Sabbath day is found in submitting our lives to God in divine unity. The message we are being taught is that the divine service of the Sabath day causes us to have a great desire for godliness, so much so, as the Zohar states the Neshama wants to leave the physical and reunite with its divine source. The Sages say when one serves God on the Sabath day with such great intensity, it is as if one’s Neshama has actually gone out and returned to its source. This is explained by the example, “If one was deserving of the death penalty for idol worship then it is as if it was already implemented” meaning that he is forgiven. (Talmud Bavli Shabbat 118b). The rabbis say when the Sabbath day has become a day of total dedication to the spiritual and a day of complete connection with God, then it will be impossible for you to do any manner of work.

The idea here is that we were not created as beasts of burden. We were not created to live just to work. The Sabbath day unburdens us, unchains us from the routine of the week so that we can get connected to God. The Shabbat is meant to be a day of peace and drawing near to the Lord. In Parashat Behar the Lord God says Vayikra / Leviticus 26:2, אֶת־שַׁבְּתֹתַ֣י תִּשְׁמֹ֔רוּ וּמִקְדָּשִׁ֖י תִּירָ֑אוּ אֲנִ֖י יְהוָֽה 26:2 ‘You shall keep My sabbaths and reverence My sanctuary; I am the Lord. (NASB) When we speak about the essence of the Sabbath day, we speak of something more to this command, especially in light of the NT connection to the Lord God of Israel sending His Spirit to dwell in our hearts where our hearts literally become a sanctuary, a dwelling place of God. The question presented to us in light of what these Scriptures are speaking is whether we are willing to submit our lives to God our Father in heaven and to Yeshua the Messiah? James 4:7 states “Submit yourselves therefore to God. Resist the devil, and he will flee from you.” (ὑποτάγητε οὖν τῷ θεῷ ἀντίστητε τῷ διαβόλῳ καὶ φεύξεται ἀφ᾽ ὑμῶν, Delitzch: לָכֵן הִכָּנְעוּ לִפְנֵי הָאֱלׂהִים הִתְיַצְּבוּ נֶגֶד הַשָּׂטָן וְיִבְרַח מִפְּנֵיכֶם Salkinson-Ginsburg: לָכֵן הִכָּנְעוּ מִפְּנֵי אֱלֹהִים הִתְיַצְּבוּ בִּפְנֵי הַשָּׂטָן וְיָנוּס מִפְּנֵיכֶם BSI: עַל כֵּן הִכָּנְעוּ לִפְנֵי אֱלֹהִים. אהִתְיַצְּבוּ נֶגֶד הַשָּׂטָן וְיִבְרַח מִפְּנֵיכֶם Peshitta: אשתעבדו הכיל לאלהא וקומו לוקבל סטנא וערק מנכו) In James the word submit is translated from the Greek word hupotasso (ὑποτάγητε). The hupo means “under” and tasso means “to arrange” so this word translated means to be subjected and subjection. The words translates as “to obey” and the Hebrew translates as הִכָּנְעוּ meaning “to surrender.” This word means to place one’s self under obedience or to be obedient to as a servant and is the way the Peshitta opens on James 4:7 (אשתעבדו). The Greek word “to arrange” one’s self under the command is a divine viewpoint of living according to a new way of life in obedience to God’s Word rather than to one’s own way of living. This is the process of surrendering our will to that of our Father in heaven. James is speaking of having a humble and submissive heart which is a choice that we make. This means those who are called by the Name of God, and by His Messiah Yeshua, daily make the choice to submit ourselves to God for the work of His Spirit in our lives allowing the Lord to transform us into the image of His Son Yeshua. The Lord God Almighty uses the situations in our lives giving us opportunity over and over again daily to submit to Him according to His word (Romans 8:28-29). We then accept His mercy to walk in His Word in repentance and learning to draw near each day. We learn about these things through the study of God’s Word. We choose to submit to God for the purpose of growing spiritually. This process is important as the Lord God has made His dwelling place in our hearts. As a result, the Lord gives us the blessing of peace that comes from humbly surrendering and submitting our lives to Him on a daily basis, nothing in this world can compare to the mercies and peace the Lord gives us. Just as we see in the scientific research regarding polaritons and quantum signatures, the quest for unhackable technology, we see a great amount of effort going into the materials development to make this technology possible. If we comparatively look at our own lives and ask the question “How much effort have I put into studying God’s Word to know Him and to draw near to Him according to His Word?” Is this an important question to you? Do you think this is an important question that God has for each of us today? These are very important topics this scientific research tends to draw out for us today! There is great value in this principle of submission to God’s Word because it establishes God’s Word as having an authority over our lives, this is the testimony of God that is spoken about in the Scriptures.  This is the testimony of God in our lives if we are willing to accept it, submit to it, and receive the great blessing God has for us in doing so.  According to the book of Hebrews, we are given the Sabbath day rest by faith in Yeshua.  Now are we faithful enough to receive it?  For the believer, the Lord God Almighty has great things for each and every one of us, beginning with the peace that comes by trusting in His Word and then applying it to our lives!

Wormholes, a New Theory and its Feasibility – A Spiritual Insight

Parashat Beha’alotcha, Are you walking in God’s ways?