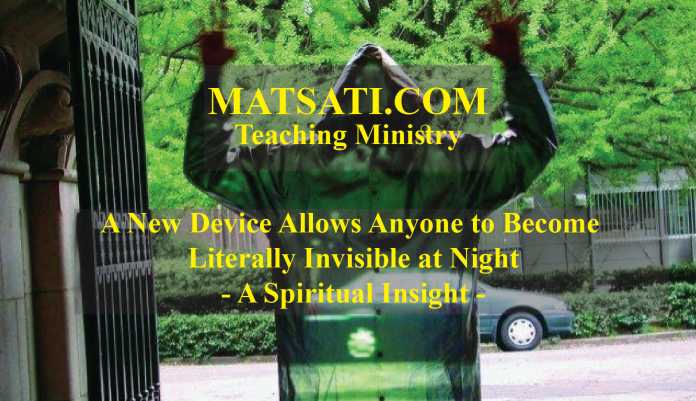 In January of 2020 researchers published a paper titled “An Adaptive and Wearable Thermal Camouflage Device” [1] at the University of California, San Diego detailing a wearable device that can hide someone from thermal imaging devices, heat detecting sensors capable of seeing differences in heat at night, such as the kind found in night vision technology.

Thermal radiation, also known as heat, is the emission of electromagnetic waves from all matter that has a temperature greater than absolute zero. If the radiating body and its surface are in thermodynamic equilibrium and the surface has perfect absorptivity at all wavelengths, it is characterized as a “blackbody.” The surface emissivity is a key component for engineering materials to prevent detection using heat sensors. Note that heat is radiated as electromagnetic energy. Emissivity is the measure of an object’s ability to emit infrared energy. Emitted energy indicates the temperature of the object. Emissivity can have a value from 0 (shiny mirror) to 1.0 (blackbody). Most organic, painted, or oxidized surfaces have emissivity values close to 0.95. The mathematical definition of emissivity is e = Me/Mo where Me is the radiant existence of a surface, and Mo is the radiant existence of a black body at the same temperature as the surface. In order to build the right type of material researchers needed to look for a material that works even when the ambient temperature changes. This led to the researchers looking for phase-changing materials whose melting point is at 30 degrees Celsius (approx. 86 degrees F). A phase transition is a thermodynamic property of a material in the sense that this most commonly describes transitions between solid, liquid, and gaseous states of matter, as well as plasma in rare cases. During a phase transition of a given medium, certain properties of the medium change, often discontinuously, as a result of the change of external conditions, such as temperature, pressure, etc. For example, a liquid may become gas upon heating to the boiling point, resulting in an abrupt change in volume. The measurement of the external conditions at which the transformation occurs is termed the phase transition. In the work to create a device with a very low emissivity, researchers looked to phase-changing materials that were similar to wax with more complex properties. The key property of phase transition temperature needed to be at approximately the temperature of human skin, ~34-36.9 degrees C so if the temperature outside of the device got hotter, the material would melt, and if the outside temperature got colder, the material would solidify, essentially behaving as an insulating layer.

The paper [1] states, the materials are more complex that simple long chain hydrocarbons (wax). This technology contained thermoelectric alloys so the phase transition could be controlled. The device was set up to function on battery power and controlled wirelessly. The researchers claimed that this is the first material that is capable of camouflaging someone from thermal sensors that can adapt to ambient temperature changes. The material consists of a samarium nickel oxide which allows control by electric power how much thermal radiation is emitted. There are many military practical applications for this technology. This technology would essentially allow soldiers to sneak around in the dark without being detected with thermal sensors, this would provide a very valuable tactical advantage. One issue with the low emissivity strategy to shield one’s thermal signature is what is called “infrared reflectance.” Since the camouflage film obviously cannot have infrared transparency, low emissivity inevitably leads to high reflectance. This would cause the reflection of the surrounding nonuniform thermal signatures to an infrared detector and result in a noticeably different thermal pattern compared to the background when there are hot or cold spots in the environment, such as the Sun (≈9900 F) or the sky (≈34 F). Thermal reflection can be captured by an infrared detector when an object moves due to the change of the reflected thermal radiation. The low-e aluminum film used in the demonstration has a reflectance value of 0.96, while the reflectance of the TED was as low as 0.07. This low reflectance of the TED was achieved by the high-emissivity polymeric elastomer material that was used. The low-e film showed the reflected infrared radiation from the human body, which was detectable by the infrared camera. The reflected thermal radiation of the hand showed the exact hand skin temperature (34 °C), suggesting the imperfection of the emissivity manipulation camouflage technique. On the other hand, the camouflage with TED did not reflect the thermal radiation from the warm hand that was placed above the TED. This would prevent a infrared sensor from detecting a moving object that is being shielded.

This technology is fascinating, and there are many practical applications, even nefarious ones, such as those who would use the technology to evade thermal sensors found in home and business security systems. We can imagine the applications for criminal activity, and we can also imagine the benefits of this technology for military applications as well. It will be interesting to watch how this technology develops and is applied as researchers further develop these functional materials!

The Spiritual Insights that we receive from this type of research is related to an invisibility cloak and our spiritual life according to the Bible. We are told from the beginning, starting with the Torah, how the Lord God Almighty desires to live in our midst. This is the Gospel Message that is laid out from the opening pages of the Torah, the Messiah (Bereshit / Genesis 3:15), the love of God, Sacrifice and redemption (Bereshit / Genesis 3:21). This type of relationship is described as we being the people of God, and the Lord being our God who dwells among us (see Bereshit / Genesis 17:7, Shemot / Exodus 6:7, Ezekiel 34:24, Ezekiel 36:28, Jeremiah 7:23, Jeremiah 30:22, Jeremiah 31:33). The concept of being the people of God was further revealed to us in the Apostolic Writings (NT) in relation to how the Holy Spirit of God would dwell in our hearts, and in our lives, in our body, how God would work in our lives. The Master, Yeshua the Messiah, told us these things, which was further explained by the Apostles and Paul. Paul wrote in Phillipians 2:13 saying, 2:13 for it is God who is at work in you, both to will and to work for His good pleasure. (NASB) This illustrates a promise, a Torah centric principle, of God dwelling in our midst. The Lord God who is at work in you as Paul wrote! The parallel to the scientific research is in the idea of one having woven an invisibility cloak around one’s self such that the God of Creation is hidden. This principle Paul is speaking of God dwelling in our hearts and of his working in our lives for his will, purpose, and good pleasure, is the miracle that God works in our lives daily such that we are able to live our lives for Him, and to love Him with all our heart, strength, and soul (the Shema, Devarim / Deuteronomy 6:4-6). The property of emissivity of the materials directly parallels this concept of the invisibility cloak, and the Lord God living, moving, and performing a work in us for others to see. The idea is some have chosen to keep their faith hidden from their friends, family, and colleagues at work in such a way that is similar to the invisibility cloak, how it works for thermal sensors. What is more disturbing, in relation to “reflected thermal imaging” is the parallel found here int he life of a believer where one can detect movement due to thermal reflections when a cloaked object is moving, the spiritual application is related to such a person who has hidden his faith in Yeshua and the God of Israel such that one’s life, what one believes, how one lives (functions) and behaves, resembles the world and not that of a child of God. This is a serious problem in light of this research as we ask the question:

“Do we live our lives wearing a cloak of invisibility in relation to our faith in Yeshua?”

The root of this question is related to the matter of being ashamed of our faith rather than being bold in our faith! Something also to be aware of is wearing an invisibility cloak is a choice, and due to a particular lifestyle, one could make such choices being unaware of what is happening. This is manifested in the “codependent dynamics” that one may have by identifying with our culture, and agreeing with what society considers good or bad, or politically correctness, or hiding behind one’s career, or even one’s training as a teacher being taught liberal ideologies at university, etc (i.e. most teachers are liberals holding to all sorts of unbiblical ideologies). This is the result of the world we live in which consists of uniformity, standardization, and globalization which runs contrary to the command of God according to Devarim / Deuteronomy 12:1-8.

The idea of globalization draws in not just the idea of companies working on a global scale, but also lets down one’s guard against the gods of these nations that is coupled to every man acting, behaving, as he pleases (Note the people of the nations are characterized not as the USA against everyone else, or as Israel against everyone else. This is the language of the Torah that characterizes the differences between the people of God and those who do not know the God of Israel!).  This means that as we are commanded to live for the Lord according to His Word. If one has a cloak of invisibility in regards to his or her faith, hiding the fact that the Lord God lives within, to drop the cloak of invisibility means that one must stand out in a way that everyone becomes aware of one’s faith. This isn’t about narcissism or self-centeredness, it is about being humble, being reverent of God and of His commands in the sense that we allow the Lord God to work in our lives for righteousness, holiness, justice, and truth and we are not afraid to let others see this in our lives! In relation to these things, lets think about what the Scriptures have to say concerning things that are “hidden” and “concealed.”

Is Our Solar System Shaped like a Deflated Croissant? – A Spiritual Insight

Monstrous ‘Blobs’ near the Earth’s Core – A Spiritual Insight

Inheritance is Related to what is Forgivable, פרשת פינחס, Parashat Pinchas,...

Parshiot Behar and Bechukotai, The Yovel (Jubilee) and the Lord walking...