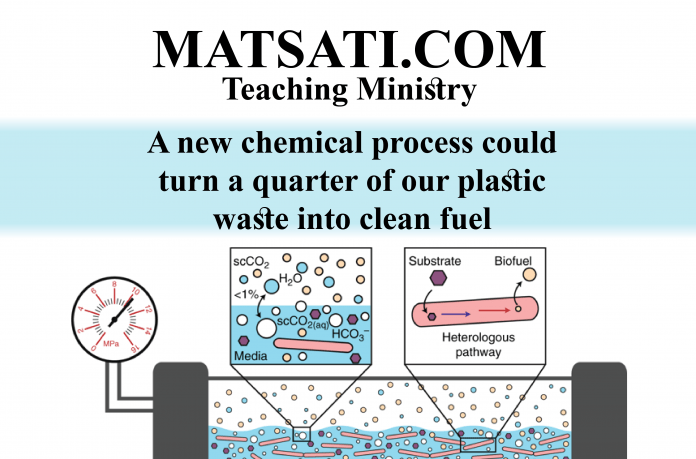 There is a brand new publication (2019) titled “Use of Supercritical Water for the Liquefaction of Polypropylene into Oil” that details a technique to turn nearly a quarter of our plastic waste into fuel (gasoline and diesel-like fuel). What a fantastic discovery!

We have produced approximately five billion tons of plastic waste over the last 50 years. Polypropylene waste is reported as accounting for 23% of the total plastic waste. To turn this quantity of plastic into liquid fuel would go a long way towards reducing the accumulated waste in plastic and lead to improvements in the environment and human health. This study utilized what they call supercritical water (380-500 C, 23 MPa or 227 atm) over a reaction time of 0.6 to 6 hours to convert polypropylene into oil. Now if we look at the phase diagram for H2O (see below) the supercritical region, under these conditions water becomes a fluid with unique properties. At this point the fluid has a density between that of water vapor and liquid at standard conditions. The reason the researchers use supercritical water, is because at this point the solubility behavior of hydrocarbons is reversed so that hydrocarbons become soluble in water allowing for single-phase reactions to take place. The specific chemical process that is being used is the supercritical hydrolysis method. Supercritical water hydrolysis is a method of converting biomass polysaccharides into lower molecular compounds. The supercritical water behaves as a solvent with bond-breaking thermal energy and heat transfer leading to the decomposition of the polypropylene to lighter components.

The paper states that 91 weight percent (wt %) of the model polypropylene was converted into oil at 425 C with a 2 to 4 hour reaction time and at 450 C 30 min to one hour reaction time. They report that higher temperatures and longer reaction times resulted in more gas products. The analysis of the oil consisted of olefins, paraffins, polycyclic, and aromatic hydrocarbons. These may then be used as fuels for heating homes or be further refined to gasoline or diesel.

Plastic is a growing environmental problem. Plastics degrade slowly and release toxic microplastics and chemicals into the land and the water. A google search reveals articles that describe the problem of microplastics in our drinking water as an example. This is a catastrophe because once these pollutants are in the water tables or the oceans, they are impossible to be removed completely. Because of these things there is much effort that is needed to develop technologies that will protect us from the waste that we create, such as plastic.

Now the Spiritual insight that we can take away from this is how this may be paralleled to Parashat Ki Tisa. It is in this Torah portion we learn a lot about the people God delivered from the land of Egypt and about God Himself in His mercy. We are told that God delivered a mixed multitude from Egypt and brought them to the foot of the mountain. If we consider the amount of polypropylene waste as being reported as accounting for 23% of the total plastic waste, this too may be considered a mixed multitude. It is interesting to note how a fraction of the people trusted in the Lord, if we read Parashat Ki Tisa (Shemot / Exodus 30:11-34:35). Now according to Midrash Rabbah on Shemot Parashat 42, we read the rabbis discussing who it was that sinned with the golden calf. The Midrash states this was the mixed multitude. The rabbinic conclusion was that God was angry with Israel because they went along with the others in their sinfulness. The commentary Malbim on Shemot / Exodus 32:11 Part 1 also states the following:

Malbim on Shemot / Exodus 32:11 Part 1
Against Your people. God had said, “Your people have become corrupt,” referring to the mixed multitude whom Moshe took out of Egypt on his own authority. Moshe replied, “If only my people have sinned, why are You angry at Your people? And if it is because they did not protest, recall that it was only recently that You brought them from the land of Egypt.” In Egypt even the B’nei Yisrael had fallen into idol worship. How, then, could they be expected to become zealous opponents of it in such a short time?

The rabbis describe even the children of Israel had fallen into idol worship having lived in the midst of an idolatrous nation. This illustrates for us the dangers of the mixed multitude, the company of people that we draw near to, this can lead to problems with actually putting God’s word into practice in the sense that one begins to follow along with the crowd as opposed to doing what God has said we should do. The Lord God told Moshe in Shemot / Exodus 32:7 Then the Lord spoke to Moses, ‘Go down at once, for your people, whom you brought up from the land of Egypt, have corrupted themselves. 32:8 ‘They have quickly turned aside from the way which I commanded them. They have made for themselves a molten calf, and have worshiped it and have sacrificed to it and said, ‘This is your god, O Israel, who brought you up from the land of Egypt!’‘ (NASB, ז וַיְדַבֵּר יְהֹוָה אֶל-מֹשֶׁה לֶךְ-רֵד כִּי שִׁחֵת עַמְּךָ אֲשֶׁר הֶעֱלֵיתָ מֵאֶרֶץ מִצְרָיִם: ח סָרוּ מַהֵר מִן-הַדֶּרֶךְ אֲשֶׁר צִוִּיתִם עָשֹוּ לָהֶם עֵגֶל מַסֵּכָה וַיִּשְׁתַּחֲווּ-לוֹ וַיִּזְבְּחוּ-לוֹ וַיֹּאמְרוּ אֵלֶּה אֱלֹהֶיךָ יִשְֹרָאֵל אֲשֶׁר הֶעֱלוּךָ מֵאֶרֶץ מִצְרָיִם:) The Lord says the people had quickly turned (סָרוּ מַהֵר) from the way (haderech, הַדֶּרֶךְ) that He had commanded them. What was the reason for this? Was it because of the mixed multitude? Is it possible to blame others for our sins? It is possible to recognize how others have influenced us, but in the end we have to own up to where our choices have led us. Based upon this text, we learn how habitual idolatry most likely led to this type of behavior. The people needed to learn how to walk and live according to God’s commands, they needed help, they needed someone to guide and lead them in the ways of God. In the text, we read how the people had an advocate on their side who speaks to God face to face for mercy (Moshe).

Just as we read in the scientific literature on supercritical water hydrolysis as a method to convert polypropylene into useful lower molecular compounds, the Lord God has also provide us with a method to convert our lives into something very useful. We read in the Scriptures to understand God’s plan for us as His people, He gives us his commands as a way of life, to love one another, to love our neighbor, to love God, and to walk in righteousness, holiness, justice, and truth. The Lord God Almighty also did something more, He gave us His only Son Yeshua the Messiah. According to the Apostolic Writings, Yeshua was a miracle worker, a rescuer, and a healer, a discloser of secrets (he knew the intentions of the heart), he was a helper, a comforter, and promoted justice and truth. He was a Torah teacher and a scholar, and we are told when he returns he will be a punisher of the wicked just as it says here in 2 Thessalonians 1:8.

2 Thessalonians 1:5-10
1:5 This is a plain indication of God’s righteous judgment so that you will be considered worthy of the kingdom of God, for which indeed you are suffering. 1:6 For after all it is only just for God to repay with affliction those who afflict you, 1:7 and to give relief to you who are afflicted and to us as well when the Lord Jesus will be revealed from heaven with His mighty angels in flaming fire, 1:8 dealing out retribution to those who do not know God and to those who do not obey the gospel of our Lord Jesus. 1:9 These will pay the penalty of eternal destruction, away from the presence of the Lord and from the glory of His power, 1:10 when He comes to be glorified in His saints on that day, and to be marveled at among all who have believed for our testimony to you was believed. (NASB)

Notice all of these things are true from a torah based perspective! We see the power of God in the hand of His deliverer, and the importance of obedience to the gospel message. These are very important concepts that must be understood in the lives of a believer. When we try to understand what Paul was saying here to the Thessalonians, we must consider Paul’s words to the Romans. In Paul’s epistle to the Romans, he keeps Yeshua and the gospel message front and center. He also weaves together the good news of Yeshua with that of the righteous lifestyle of Torah-obedience. This is important because this was something that was not understood in the wilderness Journey (Parashat Ki Tisa). Together, the good news of Yeshua, and the Torah of God form a framework that encompasses the message of the entire Bible, from Genesis to Revelation, a message of the salvation of man that results in his reconciliation to God and to man entering into the status of being called a child of God! What we may understand from the Torah and the gospel message is not a form of legalism, but of believing in God’s Messiah Yeshua, that his life was given for ours, and asking our Father in heaven to send His Spirit to come and dwell in our lives to empower our lives to live for him. As the children of God we are looking for the power of God in our lives to overcome sin! This is the corner-stone of what Torah Observance means.  Torah Observance is not about relying upon works for salvation.  We look for God to work in our lives, drawing us to Him and His ways, which means to live our lives according to His Word.  It is within this framework that we understand the place of the Torah and God’s commands as He empowers us to overcome sin in obedience to His commands. It is in this way that we know God is with us, that we are His children, and that we are remaining in His Messiah Yeshua, to walk in God’s righteous and holy ways. Paul writes the love of the brethren, as Yeshua taught, as being a Torah based identifying mark of God’s true people! It is contained within these things, when we see God’s commands being lived out by the power of the Messiah (Christ), and His Holy Spirit, that God is glorified, and we, our lives, become something of great use for the kingdom of God! This is how the Torah and the Gospel Message go hand in hand, and these are the spiritual insights that we gain while studying how researchers are turning waste into something useful. God wants to make each of us into something very useful for His glory! Now the question is “are you willing to accept this?”